Buddhist Heritage Emerging As A Major Plank in Asian Diplomacy 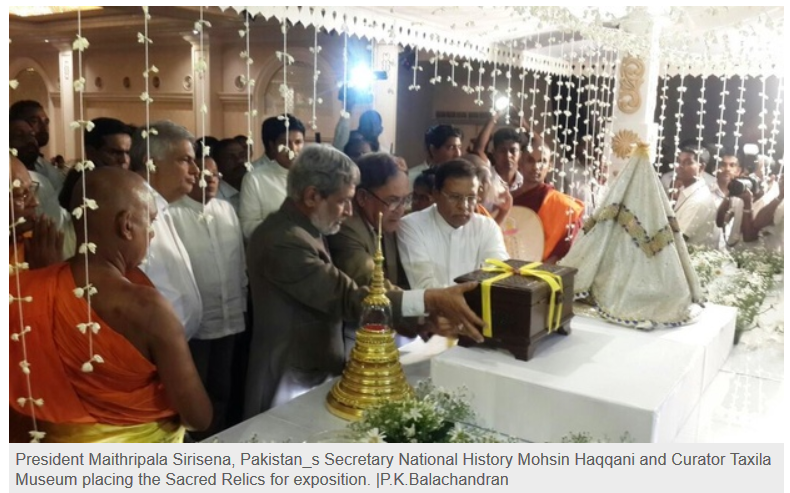 COLOMBO: Buddhist heritage is emerging as a major plank in Asian diplomacy. South, South East and East Asian countries are using Buddhism and their Buddhist heritage to build bridges with each other, going beyond traditional parameters like geographic proximity and strategic and economic necessity.

The Mahabodhi temple lantern currently being displayed by India in Lanka, May 23, 2016. |P.K.Balachandran

India’s first Prime Minister, Jawaharlal Nehru, was the first to use Hindu-majority India’s Buddhist heritage to forge ties with several countries in Asia. But the subsequent division of the world on different lines due to the Cold War, prevented countries from following the Nehruvian line. However, since the 2000s, all countries, including Hindu India and Nepal; Communist China; and Muslim Bangladesh and Pakistan; are rediscovering their Buddhist heritage, showcasing it, and using it to build ties with countries which either practice Buddhism or have a Buddhist heritage.India

To mark the 2560 th. birth anniversary of the Buddha this month, India is displaying a Vesak lantern modeled on the stupa at the Mahabodhi Temple in  Gaya, during the  Vesak celebrations in Colombo from May 21 to 25. The lantern being exhibited is based on the architecture of the stupa at the Mahabodhi Temple, which is one of the oldest brick structures in eastern India.

Earlier, Prime Minister Narendra Modi had Sri Lankan President Maithripala Sirisena over for an international Hindu-Buddhist conference at Ujjain during the Kumbh Mela. Prior to that, India had sent the Kapilavastu relics to Lanka for an all-island exhibition, which attracted huge crowds.

Not to be outdone, Pakistan, though an avowedly Islamic country, sent two bone relics from the Taxila Museum to Lanka last week, to be exhibited throughout the island. The relics were found near the Dharmarajika stupa, the earliest and the largest Buddhist complex at Taxila, built by Emperor Ashoka. Dharmarajika was excavated by two Muslims, Ghulam Qadir in 1912-16 (under the directions of Sir John Marshall, and A.D Siddiqui in 1934-36.

Recently, Muslim-majority Bangladesh opened a gallery displaying its Buddhist heritage at the International Buddhist Museum at Kandy in Central Lanka. It was inaugurated by the Bangladesh Minister of Culture, Assaduzzaman Noor.

Nepal is a Hindu majority country, but it is home to Lumbini, the birthplace of the Buddha. Kathmandu is using this to good diplomatic effect. On May 21, it organized a World Buddhist Conference in which the Vice Premier of the Shanxi Province in China, Yao Yingliang, unveiled a statue of the ancient Chinese Buddhist monk, Xuanzang.

China kicked off its Buddhist diplomacy way back in 2006 when it held an international Buddhist meet at Hangzhou, thus stealing a march over India, which organized a similar meet only in 2011.