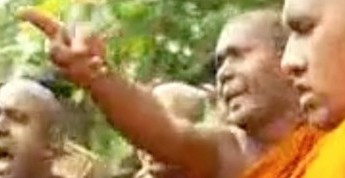 It sounds like an oxymoron, but it is starting to smell that way. The controversy over destruction of a mosque near the Golden Temple of Dambulla—a Buddhist cave-temple in central Sri Lanka which has been a pilgrimage destination since the third century, and is today a UNESCO World Heritage Site—bears echoes of the 1992 destruction of the Babri Mosque in Ayodhya, India, which ultimately led to the Gujarat genocide.
This May 2 report by Sudha Ramachandran for Asia Times (interspersed with our annotation) is pretty chilling:

Sri Lankan monks join rampaging mob
Sri Lanka’s Muslim community is insecure and angry.
A mosque in the central town of Dambulla was attacked with petrol bombs and vandalized around 10 days ago by a mob led by radical Buddhist monks. To add insult to injury, the government has bowed to the mob’s demand and ordered the mosque’s demolition and relocation.
Muslims say the mosque is about 60 years old. The monks insist it was built after 1982 when the government declared the area to be a “Buddhist sacred area”. They allege that the mosque is an “illegal structure”.

Located about 150 kilometers northeast of the capital Colombo, Dambulla is a Buddhist pilgrim town. Trouble erupted when a mob of around 2,000 Sinhalese, including monks led by the mahanayaka (chief priest) of the Rangiri Dambula chapter, Inamaluwe Sumangala Thero, stormed the mosque and damaged it, disrupting ongoing Friday prayers. Television footage has captured the mob chanting derogatory and racist slogans. Monks can be seen going on a rampage, with one monk even disrobing and exposing himself.

They have threatened to demolish the mosque if the government doesn’t relocate it.
Within days of the violence and the warning, Prime Minister Disanayaka Mudiyanselage Jayaratne, who also heads the Ministry of Buddhist Sasana and Religious Affairs, announced the mosque’s relocation. Muslims have been “offered the choice of three alternate locations” to relocate the mosque, he said, adding that “steps are being taken to immediately shift the mosque”.
Muslim leaders have rejected the offer. “We will not agree to any compromise of taking land elsewhere,” Sri Lanka Muslim Congress leader and Justice Minister Rauf Hakeem told reporters in Colombo. The SLMC is part of the ruling United People’s Freedom Alliance.
The Muslim community has been protesting the violence and the government decision through demonstrations and shut-downs.

President Mahinda Rajapaksa, who has refrained from reining in the Buddhist extremists in his government and outside hitherto, was outside the country when the attack in Dambulla took place. He has been silent on the matter since his return.

As we have noted, Sri Lanka’s Muslims have, not surprisingly, often been at odds with the Hindu Tamils. But now it appears both are feeling the pressure of Buddhist chauvinism…

Also in the crosshairs of the Dambulla monks is a Hindu temple in the area.
“There are 72 unauthorized constructions near the Dambulla Buddhist temple, including the mosque and a kovil [a Hindu temple in Tamil], which will be removed within six months,” a monk from Dambulla is reported to have said.

Buddhism is the religion of the majority of Sri Lankans. It is estimated that around 70% of the island’s population are Buddhist. Almost all Buddhists are Sinhalese. The religious minorities include Hindus (15%), who are mainly Tamil speaking, and Muslims (7.5%) and Christians (7.5%).
Although Buddhism advocates peace and tolerance, the way it is practiced by a fringe—albeit one that is growing and extremely powerful—is rather violent, fanatical and far from accommodative.
The Sinhala-Buddhists’ self-perception has three components. The first is that they belong to the “Aryan Sinhala race” (as distinct from the Tamil Dravidians) and that Sri Lanka is their homeland; the second is that they are defenders of the Buddhist faith, the mission of protecting Buddhism having been entrusted to them by Buddha himself; and the third is that Sri Lanka is the home for the Sinhala language. This self-perception has created a virulent form of Sinhala-Buddhist supremacism.

Now, this is a truly rich irony. Recall that it was the Hindu deity Ram (Rama) whose mythology was at issue in the Ayodhya controversy. In the Hindu epic the Ramayana, Rama is incarnate on earth (an avatar of the greater deity Vishnu), a prince of Ayodhya in northern India, who makes war on Lanka (contemporary Sri Lanka) to win back his captive wife Sita who had been abducted there by the island’s demon king Ravana. This story is believed to have roots in the exploits of a culture hero who carried the Aryan civilization south, conquering the Dravidian peoples who were represented in the epic as “demons.” Contemporary Hindu militants are also making a claim to another key site in the story—the purported remains of the Ram Setu land bridge linking India and Sri Lanka, said to have been built by Rama’s invading armies.

The Mahavamsa mindset lies at the core of Sinhala-Buddhist hardline arguments that the island is “theirs” and religious and ethnic minorities are “guests”, who stay in Sri Lanka on the sufferance of the Sinhalese-Buddhists. Their continued stay here is on the condition of “good behavior”. As former chief of army staff, Lieutenant General Sarath Fonseka, once said in an interview, the minorities must not “demand undue things”.

So while India’s Hindu fascists look to the Ramayana to justify their supremacy, Sri Lanka’s Sinhalese chauvinists look to the Mahavamsa. To make some historical sense of this—It seems that while the people of Lanka had adopted the Aryan cosmology (proto-Hinduism) back in the myth-shrouded era of Rama, they continued to speak their Dravidian language, and to “be” Tamils. As can be gleaned from the Mahavamsa and Lakdiva websites, an actual Aryan dynasty was only imposed when the Indian emperor Asoka dispatched his son Mahinda (also rendered Mahendra, and by some accounts Asoka’s brother) to rule the island, circa 268 BCE. While Tamil is a Dravidian tongue, the Ethnologue website informs us that the Sinhalese language Pali is an Indo-Aryan one, related to Hindi and Sanskrit. It is also the liturgical language of Theravada Buddhism, much as Sanskrit is the liturgical language of Hinduism. Asoka famously established a Buddhist dynasty in India, although Hindu hegemony was re-established after his death, and Buddhist rule survived only in peripheral areas—Sri Lanka in the south; the Gandharan and Kushan states in the north (contemporary Afghanistan—the Bamiyan Buddhas destroyed by the Taliban in 2001 were also a legacy of Asoka’s influence). So while glorification of an Aryan identity (with its obvious parallels to European fascism) is the domain of Hindu extremism in India, it is linked to Buddhist chauvinism in Sri Lanka. This becomes especially clear in the portrayal of Muslims in explicitly anti-Semitic terms…

Over the past 125 years or so, violence has been directed against the asinhala (un-Sinhala) and the abaudha (un-Buddhist). During colonial rule, Buddhist revivalists like Anagarika Dharmapala mobilized the masses not so much against the colonial regime but the Christian minority, their privileged position in society and political life, and their alleged misdeeds. In the early 20th century, it was the Muslims, who dominated business and trade, who came under fire from the Sinhalese-Buddhists.

In 1915, Dharmapala wrote: “The Muhammedans, an alien people… by Shylockian methods became prosperous like the Jews. The Sinhalese sons of the soil, whose ancestors for 2,358 years had shed rivers of blood to keep the country free from alien invaders are in the eyes of the British only vagabonds.”

Get it? The Sinhalese are “sons of the soil,” while the Muslims are “alien” and even “Shylockian.” Does this sound familiar?

Inflammatory writing in publications Dharmapala’s Sinhala Bauddhaya and Piyadasa Sirisena’s Sinhala Jathiya fueled anti-Muslim sentiment in the island and is believed to have culminated in the anti-Muslim riots that year.

Dharmapala hailed the anti-Muslim violence. “The peaceful Sinhalese have at last shown that they can no longer bear the insult of the alien,” he wrote. “The whole nation in one day has risen against the Moor [Muslims] people.”

The role of Buddhists in Sri Lankan politics grew substantially post-Independence especially in the decade of the 1950s, when the country was swept by a wave of Buddhist resurgence in the wake of the 2500th death anniversary of the Buddha.

It is in the Buddhist revivalism of this period that the beginnings of the conflictual relationship between the Sinhalese and Tamils can be traced. The role of political monks in obstructing a federal solution to the ethnic conflict, by unleashing violence if necessary became apparent in the 1950s. It would plunge Sri Lanka into bloody civil war.

The end of the civil war and the defeat of the Liberation Tigers of Tamil Eelam in 2009 triggered a tidal wave of Sinhalese-Buddhist triumphalism…. In the war-ravaged, Tamil-dominated Northern province this muscular assertion of the Sinhala Buddhist identity has manifested itself not only in increasing Sinhalization of signboards and village and street names but in a proliferation of Buddha statues and Buddhist temples.
A recent report by International Crisis Group (ICG) says that Buddhist temples are coming up near military installations but also “without permission on private land”. “New constructions” are coming up over destroyed Hindu temples.

“There are also fears,” the ICG report says, “that the government’s archaeological department, long under the influence of Sinhalese nationalists and heavily lobbied by influential Buddhist groups, would use ‘discovered’ ancient Buddhist sites in the north” to build new Buddhist temples there.
It is in the context of this Sinhalese-Buddhist triumphalism that the recent aggression against Muslims and other religious minorities and their places of worship must be seen.

In September last year, a mosque in Anuradhapura, an ancient Buddhist city and United Nations Educational, Scientific and Cultural Organization world heritage site, was demolished by a mob. The monk who led that attack told BBC that the mosque was built on land given to Sinhalese Buddhists 2,000 years ago; hence the attack.

Attacks on churches and priests have grown in post-war Sri Lanka too, with the Jathika Hela Urumaya (JHU), a party led by monks that is a part of the ruling coalition, justifying the violence by claiming that priests are luring Buddhists to Christianity.

Writer Ramachandran goes on to note the obvious analogy to Ayodha. She does, happily, see some differences:

The underlying issues and context of the attacks on the Dambulla mosque and the Babri masjid are not identical. The mobilization in Dambulla was local, unlike the country-wide campaign that preceded the Babri masjid’s demolition.

Still, Sri Lankans should be worried. The hate rhetoric articulated by the radical monks is uncannily similar to that mouthed by India’s proponents of Hindutva. The Dambulla incident could unleash emotions and events with far more serious consequences.

Divisions along caste and linguistic lines have defeated somewhat the Hindutva (literally Hinduness, an exclusivist ideology that aims at making India Hindu) agenda of India’s Hindu nationalists and extremists.

Yet to recover from decades of civil war, Sri Lanka is lurching towards more bloodletting, this time along religious lines.

Definitely one to watch, and we wish this ugly affair had won more international coverage. That lovely reference to “Shylockian” Muslims is further evidence that, as we have long contended, anti-Semitism and Islamophobia are genetically linked phenomenon. This should give pause to Zionists who support Israel’s own political archaeology at the Temple Mount and Jewish holy sites on the West Bank. Not that we are holding our breath.
WR