Broad front for Good Governance; Agreement With a Collective of 110 Civil Orgs

A collective of over 110 civil society organisations, political parties and trade unions yesterday signed an agreement with the United National Front for Good Governance (UNFGG) to defeat the reactionary forces striving to reverse the victories gained by the people in the aftermath of January 8 Presidential election. Here, Prime Minister Ranil Wickremesinghe and National Movement for Justice Chairman Ven. Maduluwawe Sobitha Thera who signed the agreement on behalf of the UNFGG and civil society organisation

Prime Minister Ranil Wickremesinghe said his party discussed with other political parties to have a broader front for Good Governance.

“We will make the economy more competitive while ensuring free education and health to the people,” he said.

The Prime Minister said a large number of civil society groups, trade unions and political parties with different political ideologies, ethnic and religious identities got together to establish democracy and good governance by supporting a common candidate at the last presidential election.

“We wanted to ensure that freedom and democracy in the country and provide relief to the people at large,” he said. Prime Minister Wickremesinghe added that the government succeeded in bringing good governance to the country within 100 days.

“We removed the dictatorial system and started giving relief to the people,” he said.

The Prime Minister added that the present government was able to do many things to ensure freedom and good governance in the country.

“We were a minority government but the UPFA agreed to provide their support to us in Parliament for democratic changes,” he said.

Wickremesinghe added that the UPFA failed to keep its promises.

The Prime Minister added that even the Constitutional Council could not be established devoid of politics.

The Premier said the country was heading for feudalism as people forgot that doing politics is not the right of citizens of the country but the politicians.

He said corruption, fraud and other vices were rampant as the country was heading for feudalism.

“The people lost their freedom and the very foundation of society collapsed. What we saw at the end of 100 days is that the reactionary forces striving for a counter revolution to reverse the people’s victories ensured by the government after the January 8,” he said. 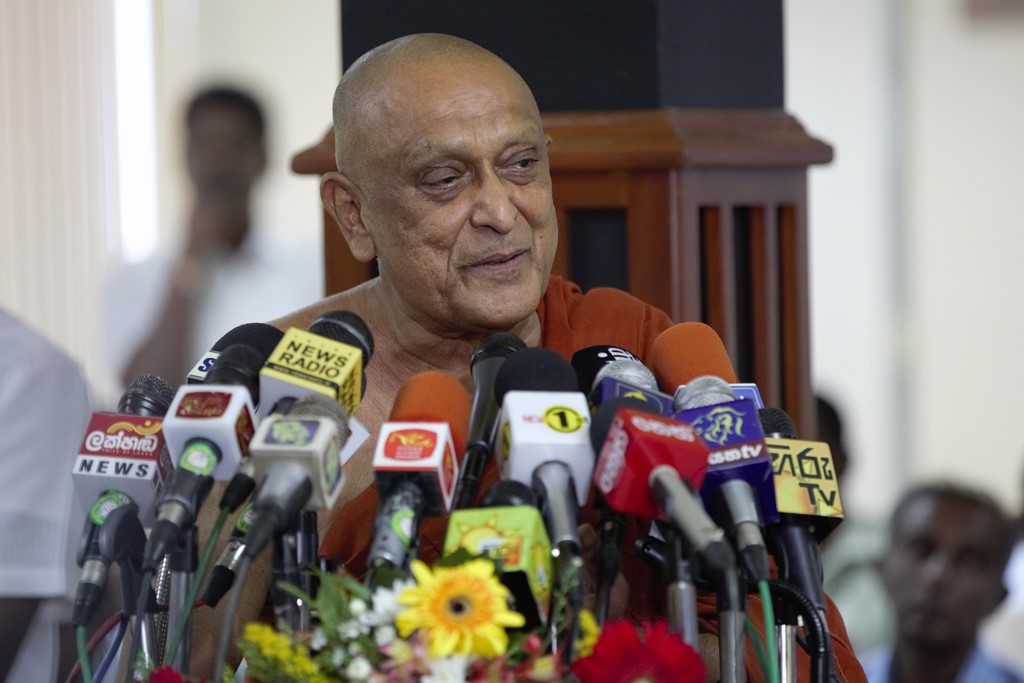 The people can see for themselves the vast changes that has taken place in the country during the past few months, National Movement for a Just Society Convenor Ven. Maduluwawe Sobitha Thera said yesterday.

“More than 5,000 people were given free meals day and night at government expense at Danselas during the election campaign in the past and such Danselas are no longer seen in the country during this election period,” he said.

Ven. Sobitha Thera added that no hoardings or cutouts are on display promoting politicians on the roadside like in the past.

“There was a time when policemen were on duty for the safety of such cutouts,” he said.

The thera added that the present government has to pay the bills for hosting danselas by the former regime.

The thera added that government vehicles were used by the previous regime during elections disregarding election laws.

He said members of the present government are paying money to the government for the use of government vehicles for election related activities.

The thera added that murders in the country has declined.

The people have to pay Rs. 300 million for the use of SLCTB buses used by the former regime for their election campaign, he said.

The thera said the people have a duty to prevent drug dealers and anti-social elements from entering Parliament by defeating them at the election.

Ven Sobitha Thera requested the Prime Minister to take stern action against those who get involved in corruption, bribery and vices in his administration in the future too.

“The country needs a robust, administrative and a diplomatic service,” he said.

The thera added that the Prime Minister should pay special attention to bridge the gap between haves and have nots.

“What people at grassroots level want is to get their tanks renovated to do their cultivation,” he said.

“It is the responsibility of the government to create the market for the local producers. Sending of Sri Lankans to the Middle East as housemaids should be stopped forthwith.”

Ven Sobitha thera added that an alternative Cabinet of Ministers will be appointed by his organisation to monitor what the ministers of the next government are actually doing.

“We will be compelled to criticise you, if you are engaged in any wrongdoing . Then we will become enemies,” he said.

The thera added that his blessings with the next government will remain until it discharges it service honestly.

“This is a crucial election and the people should elect candidates with high moral standards to Parliament. We hope that the Prime Minister will be committed towards realising what is included in the Agreement,” he said.

He said the National Movement for a Just Society expanded in an unprecedented manner for justice and fair play in society.

“We presented our common programme aimed at creating a just society to then president Mahinda Rajapaksa and urged him to abolish the executive presidency as his government enjoyed a two thirds majority in Parliament,” the thera said.

The thera said his organisation insisted on the former President to revive the 17th Amendment to the Constitution and change the existing electoral system.

“We were compelled to field a Common Candidate to get our programme done as the former President did not heed our request,” he said.

The thera said the abolition of the executive presidency, revival of 17th Amendment to the Constitution, empowering independent commissions and the introduction of a new election system were their top priorities.

“If we do not have new electoral reforms soon the entire Parliament will comprise drug barons, rapists, drug peddlers and underworld figures in 20 years,” he said.

He asked as to what can be expected from drug peddlers, rapists and underworld leaders, if they are elected to the Legislature.

The 19th Amendment to the Constitution was adopted in Parliament, he said.

Ven Sobitha Thera said the government was unable to get the 19th Amendment to the constitution passed as expected by the people.

“The country gained a number of achievements through the 19th Amendment to the Constitution,” he said.

The thera said the President cannot dissolve Parliament until four and a half years.

He added that the laws pertaining to cross overs were not amended due to stiff opposition.

“The parliamentarians can start crossing over to other parties for money if both parties are in a close tie.”

“Over 110 organisations have tied up to realise a common programme and establish good governance,” he said.

The thera requested the Prime Minister on behalf of the 115 civil society organisations and trade unions that a new Constitution be drafted.

Ven Sobitha Thera said he signed the agreement with the Prime Minister on behalf of over 115 organisations for the formulation of a new Constitution.

Ven. Sobitha Thera told the Prime Minister not to consider friendship nor relations when dealing with corruption, bribery and all types of malpractices.