Britain cuts funding for the Commonwealth 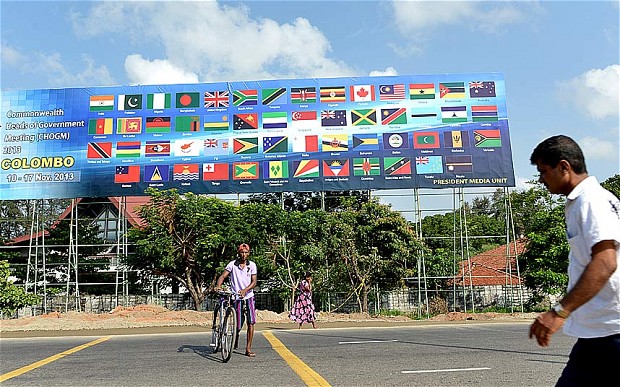 As the organisation faces criticism over its forthcoming Sri Lanka summit, major donors are pulling funds due to concerns over its direction

By Damien McElroy and Steven Swinford
Britain has pulled funds from the Commonwealth over concerns about its leadership and performance, it emerged on Wednesday, as the troubled organisation faces mounting criticism over its forthcoming summit in Sri Lanka.
With 52 of the organisation’s 53 members prepared to defy human rights protests by gathering in Sri Lanka, concerns over its direction have seen major donors scale back contributions to its budget.
Whitehall has imposed cuts of £3 million over two years from its grant to the Commonwealth Secretariat. Stephen Harper, the Canadian prime minister, provoked fears of a funding crisis this week by warning that Ottawa was looking at the scale of its own “financing”.
Canada is boycotting the November Commonwealth Heads of Government summit over its concerns about the host’s human rights record and continuing extra-judicial killings.
David Cameron faces criticism from an influential group of MPs over his decision to attend the meeting. Several MPs on the foreign affairs select committee want to use a human rights report to be published next week to express “regret” at the Prime Minister’s decision to attend.
Mr Cameron has pledged to raise human rights abuses with Mahinda Rajapaksa, the Sri Lankan president, who has dismissed widespread international concern about mass violations during and after Sri Lanka’s civil war against Tamil separatists.

Divisions over the Commonwealth’s democratic standards are likely to dominate the summit. The despotic government of Gambia, which last week declared that it was pulling out of the “neocolonial” organisation, upped the ante yesterday by accusing Britain and the US of sponsoring a 1995 coup.

It said Gambia would not surrender its mineral resources to “old vampires and present-day locusts”.
A senior former official at the secretariat, which is based at Marlborough House on Pall Mall, told The Daily Telegraph that the organisation’s troubles went deeper than the splits over the summit. Members were increasingly unhappy with Kamalesh Sharma, the secretary-general. Canada’s threat to withhold funds unless the organisation demonstrated a fresh approach could potentially cripple the organisation. Canada provides £10 million to the Commonwealth every year, the second largest contribution after Britain’s £16 million.
“William Hague has recently conceded to critics of the Commonwealth leadership that a change would be desirable,” the source said. “It is a pity but Mr Sharma is the wrong man for the job. The Commonwealth has a big job to do helping to improve official work in its member states but Mr Sharma is not interested.” A spokesman for Mr Sharma refused to return calls for comment on criticism of its secretariat from its members.

Sources said Whitehall had imposed annual cuts of £1.5 million from a portion of the grant it gives the Commonwealth to spend on improving government standards in its member states.

Officials said the decision was taken in a review in July in which Commonwealth development spending was classified as poor but that the money could be restored if the Commonwealth improved its programmes.
Simon Danczuk, the Labour MP for Rochdale, on Wednesday raised the murder of Khurum Sheikh, 32, a Red Cross worker from Rochdale, in Sri Lanka last year, at Prime Minister’s Questions. He said: “Justice continues to be denied and the key suspect is a close ally of the Sri Lankan president.

“Is the Prime Minister comfortable meeting this president at the Commonwealth Heads of Government next month and what will he say to him?”

One of the men accused of the attack is a prominent figure in Mr Rajapaska’s Sri Lanka Freedom Party.
Mr Cameron replied: “I think it is right for the British Prime Minister to go to the Commonwealth conference.
“But … we should not hold back in being very clear about those aspects of the human rights record in Sri Lanka that we are not happy with”
TG