Bringing dons back to universities, Editorial, The Island 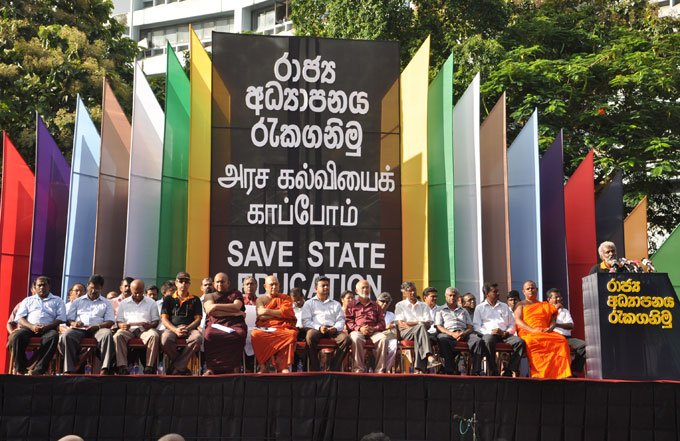 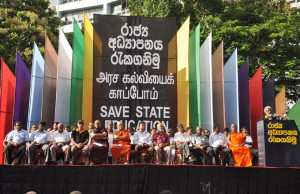 The government has reopened universities but without teachers. Students are keeping away and conducting street protests.

The university crisis has manifestly got out of hand. The striking dons have crossed the Rubicon. The government is trying to wear down the strikers, who have shown remarkable resilience. Neither side is likely to blink in the foreseeable future; all signs are that the universities will remain paralysed indefinitely and students will be driven to extreme action. On Thursday, they staged a protest near the University Grants Commission and the police had to use water cannon to disperse them. The situation is bound to deteriorate further.

The government is trying its old tricks. It is all out to brand the striking dons traitors with a political agenda. But, the fact remains that most of those at the forefront of the on-going trade union battle fully backed President Mahinda Rajapaksa’s re-election bid in 2010. Moreover, when the Federation of University Teachers’ Associations (FUTA) suspended its last strike its members accused their leaders of collaborating with the government.

President Rajapaksa keeps saying that, in solving the university crisis, he is for a win-win situation, but his higher education minister is determined to bulldoze his way through. Minister S. B. Dissanayake has apparently confused a win-win situation with a heads-I-win-tails-you-lose settlement. He insists that the university teachers have already got what they asked for; he is apparently trying to secure his ‘win’ by refusing to meet FUTA demands. If he thinks FUTA has already won, then there is no point in expecting or urging him to negotiate with it with a view to working out a compromise formula. What we gather from FUTA members’ statements is that they consider Minister Dissanayake the biggest obstacle to a solution. They are of the view that whenever something positive emerges from talks between FUTA and the government, he promptly throws a monkey wrench in the works.

The government must stop thinking it is infra dig to be flexible in negotiating with FUTA. Funds cannot be a problem for it; it is paying some state employees’ PAYE tax illegally according to the Committee on Public Enterprises, to the tune of Rs. 2 billion per annum. This is about the amount the government needs to meet university teachers’ demand for a pay hike.

The government is dreaming of turning this country into Asia’s Knowledge Hub. So, it must find ways and means of stepping up financial allocations for education. FUTA is not demanding that expenditure on education be increased upto 6 per cent of the GDP overnight. It has set a goal and wants a pledge from the government to work towards it. Why the government cannot agree to this demand defies comprehension. Some ministers are bandying about figures they do not understand in a bid to bolster their claim that the country is already spending about 6 per cent of the GDP on education. They need to be sent back to school! Wasn’t it one of them who audaciously claimed a few moons ago that a family of three could live on a meagre income of Rs. 7,500?

FUTA’s demand that university teachers be consulted when decisions are made on the higher education sector could be granted immediately. In a country where hoity-toity politicians and their bureaucrats abuse power and bungle, there should be a robust countervailing force to ensure that decisions are not made according to their whims and fancies.

The FUTA strike will take its toll on the GCE A/L answer script evaluation. Government teachers have refused to evaluate answer scripts without university teachers’ supervision. It is hoped that the government will not make a bigger mess of the GCE A/L results this year by circumventing the established procedures for paper marking and leaving, in the process, room for the validity of results to be questioned.

Regrettably, President Rajapaksa has refused to talk to FUTA while it is on strike. Once bitten university teachers are twice shy! Last time they suspended their trade union action following a government assurance only to be taken for a ride. It is hoped that wiser counsel will prevail. Let the President and FUTA soften their stands, sit down and talk.
IS