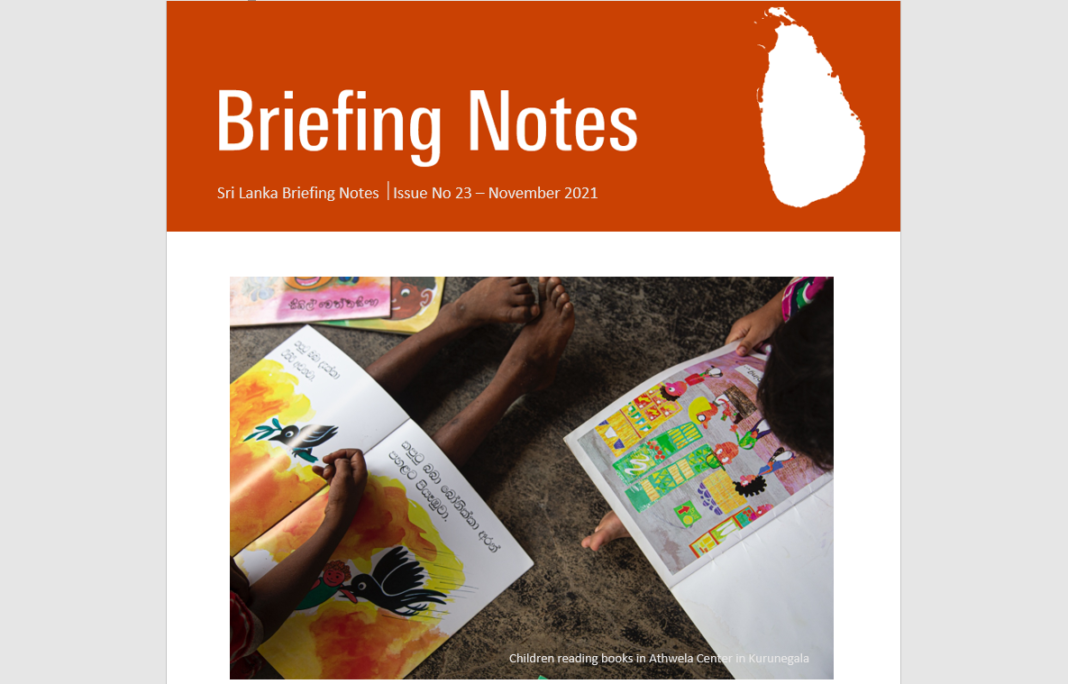 In February of 2020 a parliamentary debate took place on the increasing number of cases related to child abuse in Sri Lanka. Responding to the opposition, The Hon. Chamal Rajapaksha, tabled statistics [Parliament Hansard of 07th February 2020] that indicated 34 cases of child abuse had been reported within the first 15 days of the 2020.

The data also included 78 cases of rape [limited by legal definition in Sri Lanka to penetration of a vagina by a penis], and 21 cases of grave sexual abuse. The inclusion of child abuse with these other two forms of sexual violence is indicative of how child abuse is generally perceived as a sexual violation in Sri Lanka. That said, the term ළමා අපචාර used in the Hansard is a common colloquial misconception and refers to wrongful acts committed by a child. The accurate term would be ළමා අපයෝජන, which refers to child abuse, i.e. abuse of a child. Furthermore, there is no indication of how the data has been disaggregated. For example, does the rape data include instances of statutory rape – those under the age of 16, and would the cases of grave sexual abuse include sexual acts committed against boys? Also, who qualifies as a child within this data? The International Child Rights Convention defines a child as a person not yet 18.

On February 19th, 2020, during the continuing debate, the parliamentary Hansard states that 3402 cases of sexual violence committed against a child took place in 2019, with disaggregated data to indicate separate instances of rape, grave sexual abuse, incest and child sexual abuse.

Again, it is unclear what definition of a child is being followed, given that our age of sexual consent is 16, and children between 16 and 18 may not therefore be included. The 2019 data presented in parliament also does not correspond to the Sri Lanka Police data presented in their Grave Crimes Abstract that indicate a total of less than 1800 offences against children, including cases of child cruelty. The Sri Lanka Police Grave Crimes Abstract similarly is unclear on children between ages of 16 and 18.

Further exacerbating our lack of cohesive national data, the National Child Protection Authority (NCPA) indicated that their 1929 Child Helpline received 8558 complaints between 1st January and 31st December 2019 . Seeking to address our anomalous data gathering methods, the former Chairperson of the National Child Protection Authority, Prof. Muditha Vidanapathirana, indicated in July 2021 that – “A formal National Database to assist in the control of child abuse in the country will be released next August.” Given that this was the 3rd Chairperson in a period of four years, and now has been replaced with a 4th – Udayakumara Amarasinghe, a senior lecturer from the University of Jayawardenapura, it is necessary that the NCPA administration does not fall prey to political maneuvering and is allowed to follow through on their commitments.

“conditions of depression, anxiety and screen addiction in children and adolescents have relatively increased by 20% in 2020/21 when compared to 2018/19.”

Furthermore, due to the restructuring of the NCPA website, there is currently no data available on the diverse cases of child abuse received by NCPA. Therefore, child abuse data for 2020 is limited to the Grave Crimes Abstract of the Sri Lanka Police, which indicate a total of 2055 cases, inclusive of 26 cases of sexual exploitation of children, 76 cases of cruelty to children, and 1953 cases of statutory rape.

On 29th October 2021, the Daily Mirror reported an Alarming rise in child abuse cases due to school closure. No specific statistics were offered, beyond Child and Adolescent Psychiatrist Dr. Miyuru Chandradasa from the Health Promotion Bureau stating that “conditions of depression, anxiety and screen addiction in children and adolescents have relatively increased by 20% in 2020/21 when compared to 2018/19.” This underpins reporting by CERT Sri Lanka, that indicated a dramatic increase in violations that occur on social media platforms; 2662 cases in 2019, compared with 15,985 cases during the 2020 period that also coincided with the global and national COVID19 lockdowns. Still, the lack of disaggregated data prevents us from appreciating both the scale and specificity of abuse that children face in their online spaces.
Sensible responses?

On February 19th, 2020, when The Hon. Chamal Rajapaksha, presented the partially disaggregated data in parliament, he also focused on the measures the government has taken to address and mitigate child abuse in Sri Lanka. Four key actions touted were:

1. 44 Women and Children’s desks and 498 police stations have been empowered; they have been provided a special training to investigate cases.
2. All government institutions on a multi sectoral approach conduct awareness to teachers, parents, government officers. Print and electronic media is also utilized for this purpose.
3. Child Right Protection Officers, Women Development Officers, Probation Officers, Development Officers have been appointed to District Secretariats.
4. Technical support and training is provided to police officers to combat cybercrimes.

While these are perhaps factually accurate statements, there is no evidence to suggest that these interventions have in anyway yet impacted the proliferation of child abuse in the country. The intervention in District Secretariats, for example, has been in place across successive governments for over a decade, with no evidence as to the efficacy of the approach. There are also no details available in the public domain on the skills building and training that those representing this state response mechanism have undergone. Ultimately, therefore, the efficacy of the approach can be judged by the increase or decrease of child abuse at national, district and divisional levels in Sri Lanka, which require robust monitoring and evaluation mechanisms for the government to learn from and to replicate effective interventions.

In August 2021, the Women Parliamentarians’ Caucus, together with the National Child Protection Authority, indicated that they were addressing the need to fast track child abuse cases and help victims and survivors navigate our judicial processes. The delays associated with criminal prosecution of child abuse is often an impediment for families to file and/or continue with a case, and the child’s long term emotional wellbeing is often cited as a reason to drop charges, thereby allowing for perpetrators to walk free.

“The Chairman of the National Child Protection Authority, Prof. Muditha Vidanapathirana stated that an agreement was reached following the discussions with the Judicial Service Commission to set a specific date for the hearing of child abuse cases pending in the High Courts.

Furthermore, the Chairman stated that circular No. 449 of the Judicial Service Commission has been sent to all High Court Judges on June 28th in order to give priority to cases involving children on the set date and to formulate a methodology for the purpose of identifying such cases.”

This is an understandably necessary improvement to current processes, especially as it in the best intertest of the child victim/survivor, however, real world application of these decisions needs to be monitored closely and the state held accountable for any continued failure.

In September 2020, the news company, Adaderana, reported on an interview with Minister of Justice, Ali Sabry, that covered varied areas of national interest that also included his assertion that sex education must be an integral part of a national prevention strategy for child abuse. The news report headline read: Sex education is the way to prevent child abuse – Ali Sabry

“The Minister insists that sex education is the way forward to prevent child abuse. “We must educate the children on what are their rights, what are the limitations.”
He points out that tackling child abuse should be done through three processes: social justice and a safety net, education for both the parents and the kids, and good legal administration and enforcement of legal remedies.”

The Minister sensibly suggests involving parents as a key stakeholder within the school ecosystem and underscores his willingness to work with the Ministry of Education on implementing this proposal. This is yet another opportunity for parents, civil society, and school administrations to hold our government accountable and have them follow through on what could arguably be the most effective long-term intervention on child abuse. Preventing sexual violence and exploitation, however, cannot be limited to lessons on sex and reproduction alone. Currently, as this document will show, there is an absolute dearth of child protection education in schools, which include fundamental social emotional learning concepts such as respect, empathy and consent that can be taught age appropriately in preschools, primary schools, and secondary schools. There have been successful multisectoral efforts previously, as detailed below, led by the Ministry of Education and the National Child Protection Authority, which have failed to be replicated despite their success with teachers, parents, and students. These scientifically designed, evidence-based interventions need a shift in our perception of education, i.e. the need to value our children’s emotional quotients [EQ] even as we repeatedly evaluate their IQ.

In the 2022 Budget Proposal which was presented in the Sri Lankan Parliament in early November 2021, there is no clear indication of any funds allocated for the prevention of child abuse, or any form of prevention education related to sexual violence for children and young people of Sri Lanka.