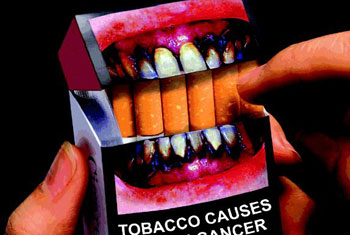 Editorial Ceylon Today
The battle against the butt it appears has now entered the realms of whodunit, with the Minister of Health, Maithripala Sirisena, introducing a subornment element to the saga of pictorial warnings on cigarette packets. Days after the Supreme Court issued a stay order halting the implementation of a special gazette notification, which would have made it mandatory for cigarette-manufacturing companies to print pictorial warnings covering 80% of the principal display area of each packet of cigarettes, he dropped a bombshell, alleging that the ‘tobacco industry’ tried to bribe him into blocking the said gazette notification.
Of course he didn’t name names, but he added mega bucks intrigue by insinuating that the money offered would have been sufficient for fourteen generations to live in the lap of luxury in a ‘first-world’ country without engaging in any other livelihood. Interestingly, the minister chose a ceremony felicitating him for dedicated services to the country, with the award being fashioned after the World Health Organization (WHO), to make the revelation.

There is no gainsaying that leading the national fight against smoking is a noble task. Smoking tobacco, as government warning indicates ‘causes heart attacks’ and is the leading cause of lung cancer. There are many heartrending stories of those inflicted with the disease. There are also many similar tales of woe caused by the ill effects of passive smoking,  Any attempt made, however feeble it might be, to discourage the health damaging habit, which also costs the government millions in terms of medical care, must be applauded. There should not be any compromise on the propagation of information, both educative and informative, and any attempt by any party to sacrifice tomorrow’s health for today’s profit must be severely condemned and rejected outright. If Minister Sirisena renders leadership to a movement dedicated to the stoppage of cigarette-smoking, he deserves every bit of help he could get.

The introduction of pictorial graphics, often times gruesome, depicting the ill-effects of tobacco smoking on the main body of cigarette packets is something many governments worldwide have resorted to in the past several years to both educate and scare the smokers into giving up the habit.  How much of an impact the graphic warnings have had in discouraging smoking, especially among newcomers, is another matter altogether. The only party that would have an objection to such display of anti-smoking graphics is those who stand to lose their profits, if such displays do adversely impact the sale of cigarettes. And that is obviously the tobacco industry.

It is indeed laudable that the Minister of Health refused to cow down to the pressures, if in fact such pressures were applied by the industry and its agents. But as a responsible minister, Sirisena has an obligation to reveal the names of those who approached him to purchase his allegiance to the industry. For, to withhold the names and shout out the allegations, only amounts to beating of an empty drum, that may well have the public wondering if a piqued minister is simply venting his frustration at having a decision go against his wishes, or whether there is really any element of truth to the revelation.  The statement by the Ceylon Tobacco Company (CTC), denying the allegations made by the minister, adds to the public misgiving, and further compels Sirisena to come out with names.

The CTC, as per its own statement, has been in existence for the last hundred years and its reputation as an efficiently-run business enterprise is beyond dispute. In fact some forty years ago, the CTC was one of the two companies in Sri Lanka in which many a young person would yearn to secure employment.

It is going to be a clash between two giants. On one side is the Minister of Health who is also the General Secretary of the Sri Lanka Freedom Party (SLFP), the main controlling partner in the governing coalition and on the other side is a business giant making billions of rupees of profits year after year, and contributing a healthy portion of it to the government coffers, by way of tax rupees.  Who will remain standing at the end of the clash would be as interesting as the story of bribery and corruption.
CT