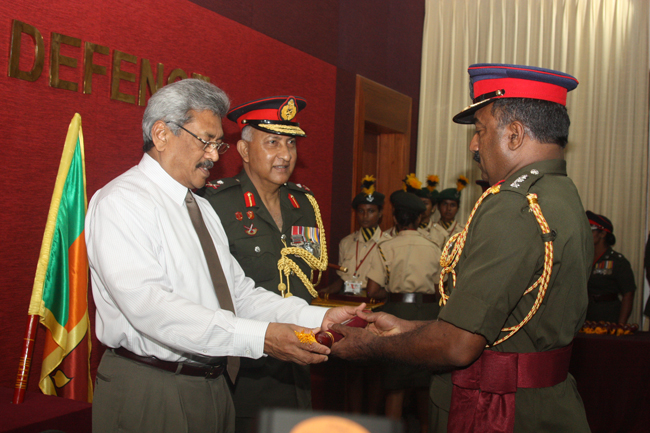 Training Academy in Rantambe. Plans are also afoot to commission another batch of Grade 2 principals as Majors of the National Cadet Corp. The rationale of this new endeavour is that military training would inculcate discipline, as stated by Secretary of Defence Gotabaya Rajapaksa.

That is a flawed and equally dangerous premise, which has apparently been borrowed from our neighbour, Pakistan, which itself is a basket case in terms of democracy, and was ruled by the military during two thirds of its independent history.

Successful modern schools are not regimented; they are the bastions of free flowing ideas, independent thinking and innovation, where students are coached according to the best of liberal traditions. Pakistan, has largely been a misnomer in this regard.

The dismantling of other elite institutions of the state, including civil society, political elites and bureaucracy, and co-opting them with the military since the immediate aftermath of independence turned Pakistan into a graveyard of democracy in the subsequent decades.  Military run schools, which are playing a dominant role in Pakistan’s education system, are yet another symptom of the democratic deficit in our South Asian neighbour. Pakistan, in fact, offers stark choices for its children. In the absence of real government investment in primary and secondary education, Islamic madrasa’s, some of which are  run by Islamic fundamentalist groups such as Lashkar-e-Taiba (LeT) and Jamaat-e-Islami offer the other only alternative for Pakistani youth to have an education. The Taliban was trained in madrasas in Peshawar, run by Pakistan’s Inter Services Intelligence.

Ours is a country blessed with a well connected network of public schools, built by Buddhist, Hindu and Muslim philanthropists and enlightened western missionaries, all of whom, not withstanding their religious differences, contributed to build an education system that rivalled any of their counterparts in the Commonwealth. These schools, which were built on liberal traditions, produced great minds who served humanity at home and in far flung lands.

If the standard of education imparted by these institutions was compromised at one point of time in history, it was due to a short sighted political decision that forced upon a compulsory Swabasha education on local students. That decision denied local students a global outlook, and was instrumental in fostering and perpetuating many evils that haunted Sri Lanka in the later decades of her independence. It was the intellectual deficit of those subsequent generations of local school products, who later replaced their enlightened predecessors in bureaucracy, including in the education service that has now enabled the military encroachment in our schools.

If we had lost our early momentum in public education, it was because we shut the doors to modernity through the compulsory Swabasha education. The solution to rectify problems that beset our school system lies in opening those doors that were shut six decades ago.

It is in this context that the government’s attempt to bring in military discipline to our schools is patently ludicrous. The Sri Lankan army or its national Cadet Corp could hardly provide an enlightened modernizing influence for our public school system. In fact, enabling the military to make inroads into the local school system could have the opposite result. That could, in the long term, force the other institutions of government to play second fiddle to the military and create a contemporary Spartan society which is built in line with modern day pariah states such as

In order to achieve a qualitative improvement in our schools, the government should train our principals and teachers in the best administrative and teaching practices, which have been adopted by government schools in the UK, US or Singapore.  The British Council or the Fulbright Commission is better equipped to provide that exposure to our principals than the Sri Lankan military.

To ensure that future generations of this country are equipped with modern skills and knowledge, the government should build online libraries, computer centres, language laboratories and other repositories of knowledge. To this end, the government should strive to adopt the ‘one laptop per child’ policy, advocated by some futurist educationalists and adopted by some countries, including India, subjected to some modification of the original program.

To rectify the costly blunder committed in the past, the government should prioritize English language education, and as the decades of Swabasha education has brought down the standard of English teaching in public schools to rock bottom, the government should bring down foreign academics to train our teachers at our English Teachers’ Training Colleges, such as the one located at Pasdunrata. Institutions such as the British Council would respond to such a request for assistance, not out of sheer altruistic nature on their part, but due to the fact that such a gesture would help enhance the soft power of countries represented by those institutions. Last but not least, there is one salient point one needs to highlight: Despite their drawbacks, our schools continue to provide a world class education, most importantly, free of charge. Those who pass out in local Advanced Level examination with higher grades – especially in mathematics and bio science streams – are truly geniuses.

Sure enough, we have our own problems. But militarization of our schools in the form of brevet colonels is not the solution.
LN