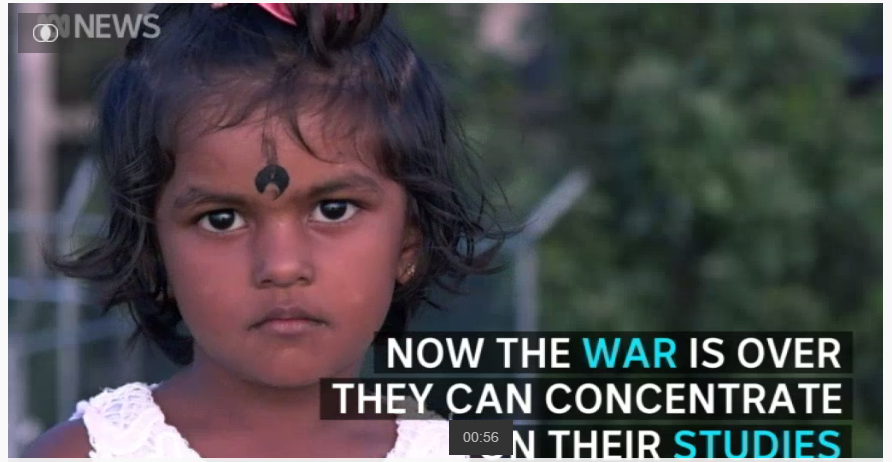 Women and girls whose male relatives were killed in Sri Lanka’s brutal civil war are now helping the country recover, taking on roles formerly reserved for men and heading to schools and universities to complete their education.

The so-called “Border Girls” mostly come from towns and villages which formed a human buffer zone between the opposing sides during the 27-year conflict, which ended in 2009 and left tens of thousands of civilians dead, many of them killed in the war’s bloody final phase.

The majority of border girls, who are from the Tamil, Sinhalese and Muslim ethnic groups, lost their partners, fathers, and brothers in the war, which pitted government troops against Liberation Tigers of Tamil Eelam (LTTE) guerrillas, also known as the Tamil Tigers.

Now these resilient women want to independently lead a change in Sri Lanka by pursuing their education and alter community attitudes so women have a leadership role in the traditionally male-led society.

‘Every family from the village lost someone’

Saroja Dilrukshi is a 16-year-old Sinhalese girl from Yakawewa, one of the border villages more than 300 kilometres from the capital Colombo.

She lost most of her family due to the war.

“I was born in Yakawewa and since I was very little there were Tamil Tiger issues. I remember hiding in the jungle many a night to escape from marauding guerrillas,” she said.

Saroja lives with her mother, the only member of her family to survive a bomb attack on a public bus in 2006.

“Everyone ran to the area of the bomb blast, everyone ran on the road and I was young, so I ran too,” she recalled.

Sixty people, including most of my family, died and my mother was seriously injured.

“Every family from the village lost someone in that bomb blast or some other attack on the village.”

Saroja was six when the attack occurred. She moved with her mother to a makeshift refugee camp and was still able to attend school, albeit for few hours, a couple of days a week.

This attack was not unusual during the war and all ethnic groups suffered as a result.

Just months after the bombing in Saroja’s village, the Tamil Tigers said the Sri Lankan army killed at least 45 civilians in another border village, Vakarai, in the country’s east.

Whenever reports of widespread casualties due to military operations appeared in the press, the army continued to accuse the Tamil Tigers of using civilians as human shields.

Saroja’s mother M Manulawathie said her life was ruined by the war.

“I’ve had a terrible life during the past 20 or so years,” she said.

“My son and other daughter were lost to the war. Even my husband had left me … I cling on to life just to look after my little daughter.”

Shortage of men leaves women to fill the gap

Her story mirrors that of many other women in the border villages.

One study by FOKUS Women, an international resource centre studying women’s issues, said in 2015 that about 57 per cent of women in border villages lost their partners either directly or indirectly due to the war.

The study said the women struggled to find work and to be accepted as the heads of their households by their communities, and had poor access to basic services.

Many women like Ms Manulawathie became the sole breadwinners after the war, but they are finding it difficult to find jobs.

As a result of the widespread loss of men during the war, “Female Headed Households” have been recognised as a demographic by the Sri Lankan Government, and there are now more than 1 million of them in the country.

The lack of men in these villages after the war has left young women like Saroja filling the gap, getting an education which was formerly only available to boys.

She now goes to school full time with the help of an NGO called Room to Read.

“I re-joined school as soon as I could in year three, and even sat for a scholarship,” she said.

“When we learnt that the war was over we were really happy and though we might finally be able to complete our education.

“Because the war is over we don’t have to think about it all the time and we can concentrate on our studies. I’m studying to qualify as a teacher.”

From border villages to the bustling streets of Colombo

Ara is 18, a Tamil Muslim who moved to the capital Colombo from Puttalam, a town close to the border which became a refugee centre for thousands of Muslims who formerly lived in border villages sandwiched between LTTE ambushes and retaliations by government forces.

Ara and her family

PHOTO: 18-year-old Ara (centre) is a Tamil Muslim whose family was internally displaced during the war. (Supplied: Room to Read)

“Thirteen years ago, there was a big challenge to continue your education in the village, especially for girls. The community was not in favour of girls continuing their education, but the situation is changing,” Ara said.

Ara is the oldest of five girls and, although her parents supported her finishing school, she had to fit it in between chores and looking after her sisters.

She said Room to Read had helped her to focus on her education and allowed her to acknowledge it was important.

“This is the first time I’ve been out of that area … I want to reach a top level and I want to help my community and other girls like me to get into a university,” she said.

Ara has now gained a coveted spot at the University of Colombo, where she is studying law.

“Facing obstacles is not the big problem, overcoming them is a big challenge,” she said.

“It’s not that difficult, if we get over them, the benefits that we receive by resolving those issues will be huge.”

“As a person who has experienced the worst aspects of war, the message I can give is that if you keep on working towards achieving your goals, you will be all right,” she said.