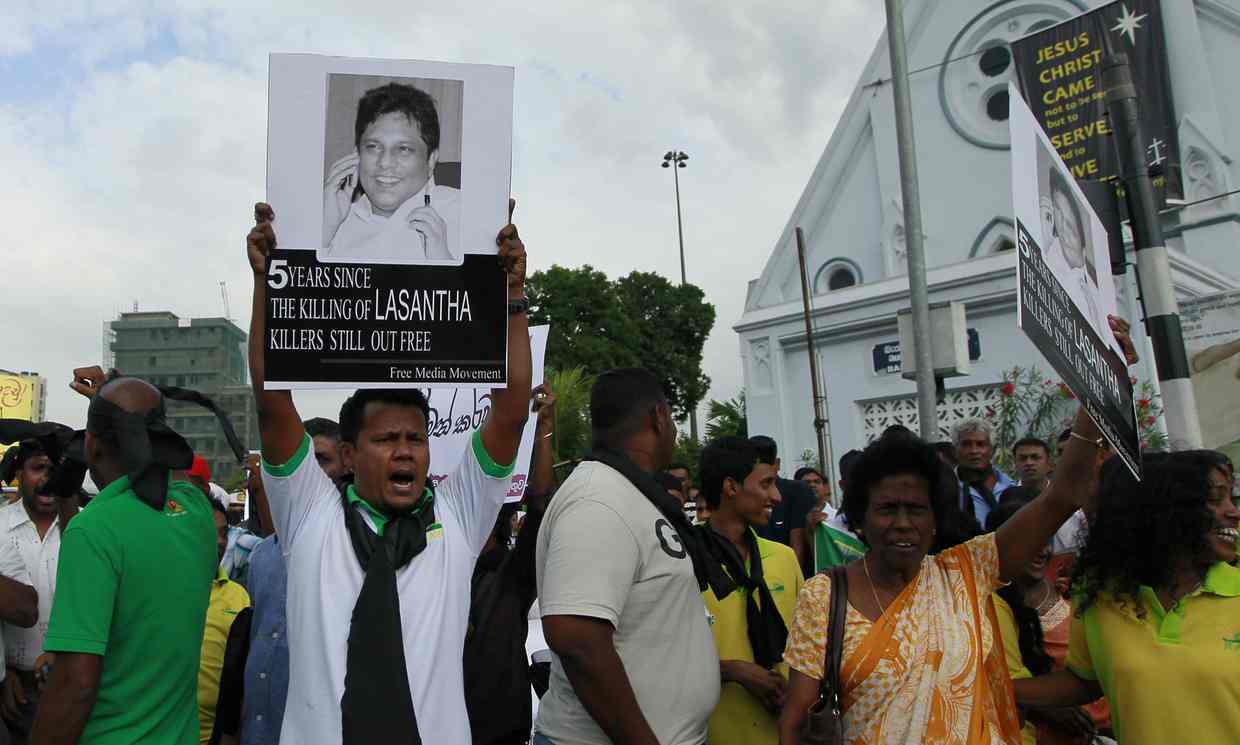 (A protestor holds a portrait of Lasantha Wickrematunge, who was killed during a protest in Colombo, Sri Lanka. Photograph: Eranga Jayawardena/AP)

New autopsy ordered for Lasantha Wickrematunge, who was gunned down during the civil war after predicting he would be killed by the government

The body of a celebrated Sri Lankan journalist gunned down in the final months of the country’s brutal civil war in 2009 will be exhumed on Tuesday as part of a fresh investigation into his death.

Lasantha Wickrematunge’s grave in Colombo has been under armed guard since the new autopsy was announced earlier in September, two months after a military intelligence official was arrested in connection with the killing of the former editor of the Sunday Leader newspaper.

Wickrematunge had foreseen his impending murder and wrote an editorial that was published three days after he was shot dead by gunmen on motorcycles while driving to work in January 2009.

“When finally I am killed, it will be the government that kills me,” he wrote, in a 2,500-word piece that was republished by the Guardian and New Yorker and attracted international scrutiny of the harassment faced by Sri Lankan journalists.

Directly addressing the then-president, Mahinda Rajapaska, the slain editor predicted an inquiry would swiftly follow his death, “but like all the inquiries you have ordered in the past, nothing will come of this one, too”.

The investigation did indeed languish, until Rajapaksa’s surprise election defeat in January 2015, when his successor, the current president Maithripala Sirisena, promised to find the journalist’s killers.

Sirisena in March appointed a secretary to examine violence against journalists under Rajapaksa’s near decade-long rule, including Wickrematunga’s murder and the disappearance of Prageeth Ekanaligoda, a cartoonist last seen being bundled into a white van near his office in January 2010.

An army intelligence officer identified in local media as P. Udalgama was arrested in July as part of the investigation and remains in custody.

According to court documents, investigating authorities requested that Wickrematunge’s body be exhumed again because two separate medical examinations at the time of his death produced contradictory results: one finding he had died due to gunshot injuries, the other finding no evidence of gun wounds at all.

Press freedom was “severely restricted” under the former president according to watchdog groups, particularly in the months surrounding the end of the civil war between the government and the separatist Tamil Tigers in May 2009.

If you write you’ll be killed

Under Wickrematunga, the virulently anti-establishment Sunday Leader closely scrutinised the army’s conduct of the civil war, often in the face of censorship orders, armed raids and arson attacks on the newspaper’s offices.

Wickrematunga himself was beaten twice and had had his home sprayed by machine-gun fire. His first wife, Raine, fled to Australia with their children after threats against the family.

Media colleagues of the late editor were reluctant to welcome news of the fresh exhumation as a sign his killers might soon be found.

“The [investigation] has been very slow, too slow, given the pledges made by this government before it came to power,” said Lasantha Ruhunage, the president of the Sri Lanka Working Journalists’ Association

The union has been lobbying for a presidential commission to investigate Rajapaksa-era attacks on journalists, and Ruhunage said he was concerned the appointment of a secretary in March meant “the government will bear the financial responsibility for such attacks but no convictions will be forthcoming”.

“We feel that is because members of the government armed forces could be implicated is some of these attacks,” he added.

“Even in [Wickrematunge’s] case we feel that the chances of any convictions is still remote, it could happen, but right now, I am not optimistic.”
Sri Lanka’s new president promises ‘no more abductions, no more censorship’

Raine Wickrematunge, who was divorced from her ex-husband before his death, said news his body would be re-examined was “a huge shock”.

“We have gone through so much, the children have had their hearts broken and now the band-aid is going to be ripped out and the wound re-opened,” she said.

But she expressed faith the “process of uncovering the murderers is not happening in a half-hearted manner anymore” and was no longer the subject of political interference.

“This is such a welcome change after the years of sham investigation we had to endure for several years after the murder,” she said.

Rajapaksa’s election defeat in 2015 – a result he reportedly resisted by trying to order a state of emergency as results came in – has ushered in significant positive reforms in the island nation, according to human rights groups.

Restrictions on media, including internet censorship, have been largely lifted, and the constitution has been amended to restore the independence of the police, judiciary and public service commissions.

The country also plans to establish a South Africa-style truth and reconciliation commission to examine crimes committed during the three-decade civil war.

Abuses by security forces remains an issue, advocates against torture say, recording at least 17 cases under Sirisena’s administration, including Briton Velauthapillai Renukaruban, who says he was and beaten in June while visiting the north of the country to be married.

Michael Safi in Delhi and Amantha Perera in Colombo
the guardian