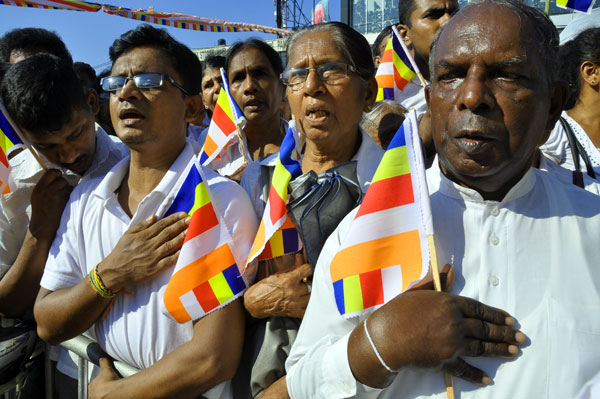 Vishakha Wijenayake
The Bodu Bala Sena (BBS) has highlighted in their website the fact the latest census reports have indicated a reduction of the percentage of the Buddhists in Sri Lanka by around nine per cent during the recent past.

Stirred up the masses

The BBS has likewise stirred up the masses with rhetoric on the low birth rate amongst the Sinhalese community. Yet another foreign conspiracy, they claim. The Sri Lankan Government, according to them, direly needs and yet lacks a national policy on population ‘control.’

The BBS attempted to influence the policy making process of the government by urging President Mahinda Rajapaksa to take action against two non government organizations, namely, Marie Stopes International (MSI) and Population Service Lanka (PSL) which they claim under the guise of providing family planning assistance have directed Sinhala women into Ligation and Resection of Tube (LRT) operations, with the intention of reducing the Sinhalese community from a majority to a minority community in Sri Lanka. Their efforts seem to have come into fruition since the government has informed all Medical Officers for Health to temporarily stop conducting LRT operations, due to the current political climate that is brewing in Sri Lanka.

Should the growth of a population be regulated?

Population control is a multifaceted conundrum. One which would most likely cause indigestion, if discussed over Sunday brunch. However, the Bodu Bala Sena is valid to the extent that this is an issue the Sri Lankan Government, nay any government for that matter, should take seriously.

China has practised a strictly regimental population control mechanism with its one child policy since 1978. Highly controversial as it may still be, the policy was introduced to solve social, economic and environmental problems specifically in the urban areas of China. Singapore too has recently identified a population deficit resulting from an ageing and shrinking workforce. A White Paper has been released proposing to bring more immigrants into Singapore in order to bridge this gap, giving rise to a heated debate. It so seems, the topic is no government’s cup of tea.

It must be noted the Sri Lankan Government accepted family planning as a national policy as far back as 1965 in a concerted governmental effort to control population growth as well as reduce maternal mortality, infant mortality and malnutrition. This too amidst ample opposition by naysayers. The ten-year plan, which was implemented in 1959 focused on the post war baby boom and its implications on the unemployment rate.

A resumption of the discourse on population control maybe pertinent in the context of Sri Lanka, given we are once again gently sailing the murky waters of a post-war period. Being predominantly a welfare state a drastic change in the number of dependents can have serious implications to the social and economic fabric of the nation. However, the question still remains as to whether competing for racial dominance by numbers or survival amidst foreign conspirators, -whatever phraseology suits you best depending on where you stand on the political spectrum-, should be a legitimate objective of population control.

To sift fact from the rhetoric, a distinction should be made between forced sterilization and women voluntarily exercising family planning options. Government policies which force people to undergo surgical sterilization are recognized as a crime against humanity in the Rome Statute and is therefore punishable under International Criminal Law. A UN agreement on women’s rights passed on 15 March 2013 spearheaded by the Commission on the Status of Women condemned and called for action to prevent violence against women in healthcare settings, including forced sterilization.

One such policy was carried out by Hitler against deformed and handicapped persons by enacting the Law for the Prevention of Hereditary Diseased Offspring. More recently, in the Czech Republic and Slovakia, there existed a widespread governmental practice of performing surgical sterilization on women without their knowledge during Caesarean sections or abortions. This practice targeted the Rome population claiming there was a ‘high, unhealthy’ reproduction rate within the community. They were sometimes financially or materially compensated though it was not explicitly stated what this compensation was for.

Venerable Galbodaatte Gnanissara Thera of the Bodu Bala Sena said “We have no intention of violating the rights of people. People should be allowed to get these surgeries done where such surgeries are necessary. However, rural women are paid Rs 500 by foreign conspirators to be surgically sterilized as soon as they give birth to two children.” When questioned further, he said such practices are carried out specifically and exclusively against the Sinhala women, and statistically around 98% of such surgeries are conducted on the Sinhalese.

However, as indicated by a General Circular No. 0109 of 2007, the Rs 500 is an out of pocket allowance paid by the government to clients who accept female or male sterilizations. This was previously done through the respective Divisional Secretariat offices. However, in an attempt to streamline the process the task was delegated to service providers such as PSL. The funds however are channelled straight from the tax payer’s pocket as is the case with most government ventures rather than from the treasure troves of an unseen foreign conspirator.

These are grave accusations that the BBS makes. The veracity of such allegations must be counterbalanced with the accuracy of facts. If the claims of the BBS be true, then by all means action should be taken to put an end to such practice and hold responsible, before the law and according to the due process of the law, all perpetrators of such action.

Should the government intervene with a woman’s right to make reproductive choices?

However, the need to prevent compulsory or forced sterilization should not be made an excuse to deny women their right to voluntarily opt for surgical sterilization. Nor should a government implement a population control policy that infringes on the reproductive choices of its people and more specifically, of its women, to the extent of denying them access to certain methods of contraception.

The United Nations Population Fund in its 2012 Annual Report recognized for the first time that access to birth control is an essential human right. It ensures the right to ‘reproductive freedom,’ of women, which centres around the principle that in order for women to decide how to manage their lives, they must have control over their bodies.

The Executive Director of the Family Planning Association of Sri Lanka, Thushara Agus, while not willing to associate herself with the rhetoric of the BBS opined that “One should not forsake fertility unless it is a very carefully thought out decision. Short term concerns such as economic constraints should not be made to influence a woman’s choice to permanently give up on her fertility.” She also said the FPASL has stopped providing permanent contraceptive procedures since before 2003, due to the need for such services decreasing, the risks associated and the availability of alternative non permanent forms of contraceptives.