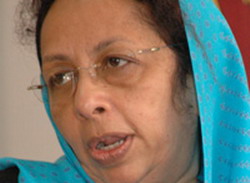 The demand was made publicly by the Bodhu Bala Sena General Secretary Ven.Galagoda Atthe Gnanasara Thera at the anti-Muslim meeting convened by the BBS in Pandura on Sunday March 24th 2013.

Gnanasara declared “war” on Ms. Ferial Ashraff amidst loud applause at the Panadura meeting attended by around 1000-1500 people.

Gnanasara Thera stated that the BBS had received reliable information from Singapore that Ms. Ashraff was working against the interests of Sinhala Buddhists.

The first was that she had prevented Sinhala songs being sung at the Sri Lankan independence day ceremony conducted in Singapore in February.

The second was that she had objected to the traditional April new year celebration being referred to as “Sinhala Avuruddhu”or Sinhala new year.

Stating that these incidents were enough proof of Ferial Ashraff’s anti-Sinhala Buddhist credentials, Gnanasara Thera declared that they were openly calling upon the “Sinhala Buddhist”Govt of President Mahinda Rajapaksa to terminate the services of Ferial Ashraff as the High Commissioner to Singapore and recall her to Sri Lanka immediately.

Although the “ethno religious fascist”Bodhu Bala Sena makes these demands publicly, Informed circles in Singapore said that the charges levelled by Gnanasara Thera against Ferial Ashraff are entirely without merit.

According to these circles Ms. Ashraff had not prevented Sinhala songs being sung at the Independence day event but only disapproved of a “jingoistic”song being sung. She had observed that such types of songs extolling the virtues of one race and promoting hatred towards other communities were “inappropriate”to be sung at the Independence day ceremony.The High Commissioner had allowed other Sinhala songs promoting Sri Lanka patriotism in general to be sung at the event.

On the question of the second charge made by Gnanasara Thera these informed sources disclosed that the BBS seemed to be misinformed about what had actually happened. According to these sources when discussions were on about organizing celebrations for the April New Year ,a few persons had referred to it as Sinhala New Year.

This well-meaning suggestion made with all good intention was being deliberately distorted said these sources who also revealed that a tiny cabal in Singapore was opposed to Ms.Ferial Ashraff due to personal reasons.

59 year old Ferial Ashraff , widow of MHM Ashraff,the legendary co-founder and leader of the Sri Lanka Muslim Congress(SLMC)entered politics after the death of her husband in a mysterious airplane crash in 2000.She contested elections in 2000 while in mourning over her bereavement but got elected to Parliament from Ampaai district with a huge number of preference votes despite not engaging in any political campaign.

Later when the SLMC underwent a split Ferial Ashraff led one faction under the aegis of the National Unity Alliance(NUA) which also had been formed by her husband earlier.The Muslim Congress remained under the leadership of Rauff Hakeem.

Ferial Ashraff made her mark in Politics as the first Muslim woman cabint minister. She was also one of the few political leaders in Sri Lanka who could speak fluently in English,Sinhala and Tamil.Although her husban was from Amparai district in the East,Ferial herself was from Kandy district in the Central province.

She bid “adieu” to active politics in 2010 and was appointed to the board of the National Institute of Education the same year.In 2011 Ferial Ashraff became Sri Lanka’s High Commissioner to Singapore.

It is noteworthy that there have been no “problems”associated with her tenure in Singapore until the Bodhu Bala Sena targeted her.

The Bodhu Bala Sena also made serious allegations against the late MHM Ashraff at the Panadura meeting . Gnanasara Thera accused Ashraff of fostering Muslim armed groups in the Eastern province when he was Shipping and Ports minister in the Chandrika Kumaratunga cabinet. The BBS general secretary charged that Ashraff had transported two containers full of weapons and distributed them to Muslim armed groups.

It may be recalled that MHM Ashraff engaged the ven.Gangodawila Soma Thera in a public debate and got the better of him some year ago. Soma Thera who sowed the seeds of the current Buddhist supemacist tendency through his rabid campaigning lost much prestige as a result of Ashraff exposing the monk in a public debate. ver since that the Sinhala Buddhist supremacist lobby has been spreading venomous hate against the Muslim leader who is no longer alive to defend himself.

It is indeed noteworthy that Rauff Hakeem leading the Sri Lanka Muslim Congress, AHM Athaullah leading the National Congress and Rishard Badhiyutheen leading the All-Ceylon Peoples Congress are all political disciples of the late MHM Ashraff.

The trio now cabinet ministers under President Rajapaksa have been maintaining the “Eloquence of Silence”in recent times when outfits such as the Bodhu Bala Sena, Sinhala Ravaya and Ravana Sena are pursuing a relentless anti-Muslim campaign. One wonders what these ministers who are in these positions due to the Groundwork laid out by Ashraff have to say about the Bodhu Bala Sena’s allegations against their mentor and leader?

It is also ironic that an ethno-religious chauvinist campaign is underway against the envoy to Singapore as that Island nation is often held up in Sri Lanka as the Economic model to follow.What is being forgotten by these chauvinist circles is the fact that Singapore is a country proud of its multi-ethnic,multi-religious heritage.Although the Chinese(75%) are the majority the national anthem is sung in Malay. Malay,Chinese, Tamil and English are the four official languages there.

Those seeking to emulate Singapore economically fail to take note of the progressive political climate created there. What is happening here is that the racially and religiously divisive politics of hatred is being exported to Sri Lanka’s mission in Singapore to taint even that country.

It remains to be seen as to whether the BBS will expand its demands further in the days to come by targeting other Muslims holding high posts in Govt or diplomatic service.

DBS Jeyarj can be reached at [email protected]