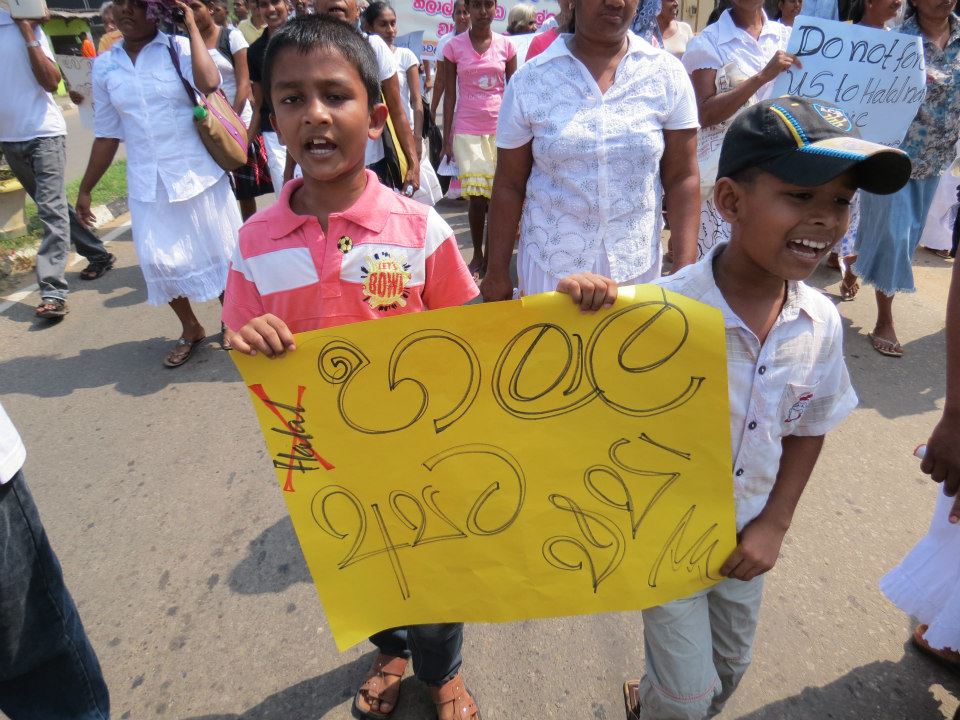 Having tasted victory over the Halal certification issue the Bodhu Bala Sena(BBS) organization is to begin another widespread campaign targeting the Muslim community on the issue of attire worn by Muslim women in Sri Lanka.

The co-founder and head of the Ethno-Religious Fascist Organization Ven.Kirama Vimalajothy Thera has announced that the Bodhu Bala Sena will commence a fresh campaign before March 31st 2013 against the form of dress covering the body that is worn by many Muslim women in Sri Lanka.

The Bodhu Bala Sena(BBS) is expected to make details of its campaign known at the Mass rally to be held in Kandy on Sunday March 17th.

Vimalajothy Thera expressing happiness over the decision by the All Ceylon Jamiyathul Ulama(ACJU)to stop Halal certified Logos on Products domestically also stated that the BBS would like the entire Halal certification process scrapped in the future.

Currently the ACJU will issue Halal certificates free of charge for products catering to the Export market if requested by the manufacturers.Locally, Halal Logos will not appear on products.
Incidently the BBS lit crackers in many urban areas in the outstations to celebrate the Halal victory. Many of these incidents occurred near Muslim owned mercantile establishments.

The BBS Leader however emphasised that while being elated over its triumph on forcing the ACJU to suspend Halal certification locally, the Bodhu Bala Sena will continue with its activities untiringly. The BBS will now commence with fresh vigour a specific campaign against the attire of Muslim women.

Though various types of clothing are worn by Muslim women in Sri Lanka, the dress that has aroused the wrath of the Bodhu Bala Sena is that which is worn to cover the whole body.

Among the forms of feminine clothing are the scarf covering the head known as “Hijab” , the veil covering the face known as “Niqab” and the loose robe like overgarment covering the whole body known as “Abaya”in Arabic, “Burqa” in Urdu and “Purdah” in Persian.

The Bodhu Bala Sena target at present is the Abaya dress of Muslim women covering the whole body.
The BBS will begin a widespread campaign in Sri Lanka demanding that Muslim women should stop wearing the Abaya in public as it hurts and affects the sensibilities of the non –Muslim population that amounts to 91% of Sri Lanka.
The perverted logic applied here is the same as that in the Anti-Halal campaign where it was questioned as to why 91% of Sri Lankans should buy and Consume Halal certified products.

The Bodhu Bala Sena which enjoys the support of Defence and Urban Development secretary Gotabhaya Rajapaksa has been conducting a multi-faceted anti-Muslim campaign under the pretext of opposing Halal certification.

A familiar feature of public speeches by BBS leaders including Vimalajothy Thera and General Secretary Ven.Galaboda Attha Gnanasera Thera had been the virulent view expressed against the Abaya or Burqa dress worn by Muslim women. All sorts of vulgar remarks and derisive comments were made against women wearing such clothing.

Both Vimalajothy and Gnasara Thera flouted principles of Vinaya by viciously attacking the Muslim women wearing such dresses. One description repeated frequently on BBS platforms was “Goni Billa” (scary person in a sack) Since the Abaya covered the whole body of the women, the BBS speakers called it “Goni Billa” in a manner that appealed to low tastes of people.

These derogatory speeches have already begun to impact on some misguided Sinhala youths. There have been scattered incidents where Muslim women in Abaya clothing have been the target of caustic,offensive remarks.Attempts have been made to yank the clothing by street urchins in a few places.In one instance the grand niece of a Veteran Muslim political leader wearing Abaya was spat upon in broad daylight on a public road.
The most serious incident was in the Southern Province at Dikwella near the Mahanama bridge where three

Muslim girls in Abaya attire were attacked and injured slightly. Complaints were made to the Police who said that no further investigation was possible due to unavailability of Eyewitness reports.
According to Islamic theologians one of the plus points in wearing the Abaya is that it prevents exposing the female body to unrelated males thereby minimising the potential for unwarranted sexual arousal and temptation. In that context it is indeed amusing to see respected Buddhist Priests wedded to the notion of celibacy being in the forefront of a campaign urging Muslim women to discard the Abaya.

Although the BBS is expected to formally commence the Anti-Abaya campaign on March 17th in Kandy,posters have already begun to appear in different parts of the country. Many of these have crude and vulgar words.
It may be recalled that Defence Secretary Gotabhaya had told the ACJU that the BBS had indicated to him that it would not proceed with further its anti-Muslim campaign if the Halal certification process was discontinued. This was a crucial factor in the decision made by the ACJU to scrap Halal labels locally.

It now appears that the Bodhu Bala Sena as in the case of most Fascist movements has not been truthful in this. The Halal victory has only whetted its appetite for more triumphs in its on going anti_Muslim activity. The Anti-Abaya campaign by the Bodhu Bala Sena will fuel the fire of communal discord further and increase insecurity among Muslim women.
– DBS.http://dbsjeyaraj.com/dbsj/archives/18140