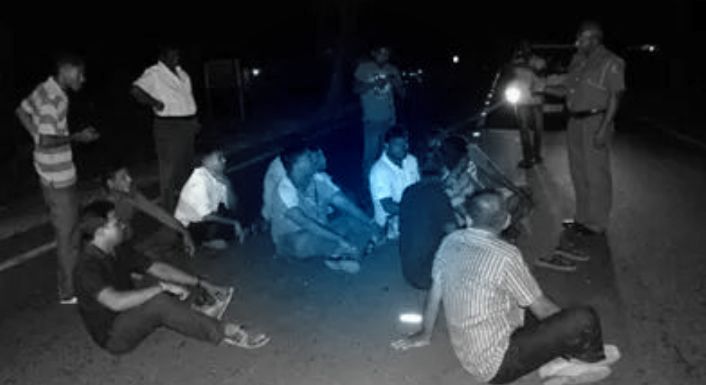 It was last Friday  the 25 July. We, a group of journalists, were asked to come to Jaffna Media Press Club from where  a vehicle would depart around 5:30 PM to Colombo, in order to  attend for a media training program.

So I too went there. Once all of us gathered we departed in two vehicles each carrying six of us.  Our vehicle departed 10 minutes later than other vehicle. We observed that when we were travelling in Kachcheri, 2 men in a motor cycle kept on following us. We did not think much about that as we assumed that they were coincidently coming behind us. And we did not see them beyond Kaithady. We continued our journey. A fellow journalist travelling in the other vehicle in front of us informed us over the phone around 8:00 PM that they reached Murukandy and asked us to come quickly. We reached Murukandy at 8:15. The other vehicle which was travelling in front of us has collected 3 more journalists and waiting for us. Continuing our journey after worshiping Murukandy pillaiyar Kovil and having tea, we collected another journalist with us. When we left from Murukandy, we let another vehicle to travel in front of us and we went behind them. One motorcyclist who was still following over took us just before the Mankulam junction and had stopped at military police check point situated at there. We were stopped at  Mankulam Military Police check point at around 9:20 PM.

The military police questioned our driver why he had not stopped the vehicle when the military signalled at Elephant pass check post. The driver replied that no one had signalled to him. At that time civil clothed personals surrounded our vehicle. Among them, one civil clothed person who was talking with someone over the phone also asked the same question from the driver. Driver replied the same as he said earlier.

Then the particular person asked the driver who are inside the vehicle. Driver replied that we were from Jaffna and going to Colombo. He said he his vehicle has been hired for  the journey.  Then they asked me where we were going. I replied that we were going to friend’s home in Colombo. I asked them why they were asking about this. They replied that they had got information that we had not stopped the vehicle when army signalled. (When the civil clothed personals were investigating us, Military Police kept silence. And also they questioned us in Tamil).

Then the civil clothed personal who questioned us contacted someone over the phone and came up with the message that all of us should register. We were asked to take our Identity Cards and to get out form the vehicle.  So I went down to the check point to get my ID registered.

My ID  was  been registered by that particular civil clothed personal. Still I was asking the questioning my self as to why we had to register if the real problem was the driver. And I decided not to confront them in that place by asking such question.

Another civil clothed person who was talking with someone over the phone also ordered to register all of our ID cards. He asked me to collect all of our ID cards and to get registered. When I told this to my colleagues, one of them  seated in front got down and we all remained seated.

While our IDs were being registered by a civil clothed man, another civil clothed man was kept on talking to someone over the phone. At this point we asked  them for  the reason for registering our ID’s which is totally unusual. He simply said “No”. But when he was registering our ID’s, he included the date of birth as well. That too is an unusual practice. Normally only ID number and address are registered at check points.

Once they finished registering, we were allowed to proceed our journey.  When we reached the  Omanthai check post one more  military reception was awaiting o our vehicle. It was around 9:50 PM. 5 soldiers led by commissioned officer surrounded our vehicle and ordered us to get down from the vehicle.  For all other vehicles only the driver had to get down for  registering.

Our ID cards were checked. At that time 3 soldiers got into our van and checked inside too.  They couldn’t find any thing incriminatory.

After that the soldiers who were checking our vehicle told us that they wanted to check our bags packed in the back of the vehicle. Four of us including myself opened  our bags for them to  check. Two of our team were seated on the rear seats,  I was standing in front of our vehicle observing. By then suddenly 3 of us saw that a man who had stylish beard, wearing military uniforms (I think those who wearing military uniform cannot keep stylish beard) dropped a small packet under the driver’s seat through the window and walked  away . Before we went to see what was in the packet, the police came from nowhere took the that  cigarette packet.

How come the polivr  were there right time to pick up the cigarette packet ?

At this time a civil clothed man (wearing shorts and T-Shirt labelled as SLRC-Nuwarellia) was suddenly come towards us using vulgar words  and dragged one of our colleagues  away.

We asked him why he was drugging him out, and who he was? He replied that he was a sub inspector of the Omanthai police station. (He mentioned the name also but I forgotten that). He said that they were going to arrest him in connection with smuggling ganja (marijuana). At that time we said that all 7 of us were in the vehicle and he has to arrest all of us. Then, all of us were taken to the police station. One of us tried to call another colleague travelling in the other vehicle over the phone. The police SI has pushed his face and seized his phone.

We kept on repeating him to take down our complaint aboutht the  cigarette packet but he did not record it.  On the other hand the soldier at the check point was  intentionally delaying the  registering of our vehicle for more than  20 minutes.

Police SI continued to shout at us using vulgar words for waiting till  the vehicle come form the check point.  Then we slowly started to walk towards Omanthai check point  which was at  200m away. One of us once again tried to inform about the incident to other vehicle that was travelling ahead of us. But the police took him form the neck  and seized the phone. Some how one of us managed to inform others regarding the incident by phone without the knowledge of the policemen. I tweeted. At once the friend who had seen my tweet called me. The policeman was writing some thing in Sinhala with a red pen  at Omanthai check point. As he heard my phone ringing it too was seized. In addition to the Identity cards and all our mobile phones too were confiscated by the police.

Once the Police SI has finished writing in Sinhala in a log book, the civil clothed police  SI changed to police uniform and kept blaming us. The  police SI and two policemen who took the ganja packet from the vehicle got into our vehicle with us and started to take us somewhere. Then we asked the police where we are being taking. Again he replied with vulgar words and said that we would know once we reached the place  shouted us to shut up.

We were taken to Omanthai police station and told to sit there. Police told us that we would be produced in court next day and be released. We were feeling hungry as we had not eaten. Therefore we asked the police to arrange some food for us. They just gave water.

By this time the vehicle in front of us, came back to the Omanthai Police Station. Journalists from Vavuniya too arrived there shortly after.

Then the confiscated mobile phones and ID cards were given back to us. Thereafter the Offcier In Charge  of the Police began to talk to us.

The OIC told us  that since the ganja  had not been found in  our bags  seven of us would be released but the driver and vehicle would be taken to magistrate. As the quantity of ganja found inside the vehicle is very small, the bail would easily be given, the OIC added. Also the OIC asked us not to worry and continue our journey. Further he said that if we wanted to go in another vehicle, he would arrange it for us.

By this time the SI and 2 policemen  who used vulgar language against us at Omanthai check point had disappeared mainly because of the presence of Vavuniya journalists at police station.

Now they were only targeting the drver. For an hour or so it was we who were targeted by the Police. Even the driver’s mobile phone or ID card was not taken; he was   not questioned. Neither he was abused with vulgar language.

But we refused to compromise with the OIC as the packet of ganja was placed by a military soldier. We emphasised that if they do not release the driver, we will be making a complaint.

Then the  OIC said  that he wanted to get evidence  of military soldiers who were on duty at military Omanthai military check point.  He further said that he had  sent a police team for the inquiry.

By this time we had been hold up for more than 3 hours.   A  police team was being sent  to Omanthai check point to inquire. We lost our patience and started  a protest sitting on the road right there. The  police did  not take down our  complaint until 2.00 AM.

Consequently, Omanthai police OIC came to the scene at 2:30 AM and informed us that the complaint would be recorded and he requested us to abandon the protest..

Following the complaint was recorded we stopped the protest  at 3:00 AM. We were  allowed to leave by  4:30 AM.

It was the  support and assistance  given by 3 journalists from Vavuniya that made a difference.

We thank Dr.Sivamohan, member of Nothern Provincial Council visited the spot and raised his supportive voice for us.

We departed the Police around   5:00 AM by a van arranged by journalists from Vavuniya  to proceed to Colombo.

After all, we reached the Sri Lanka Press Institute, Colombo  around 10 AM on 26th Saturday, where we had tea.  Then we went to the hotel to rest and change. Within 30 minutes a Sinhalese extremist organization staged a demonstration in front of the SLPI and warned that they “Should not train the terrorists”

As a result, the training was called off. We left Colombo on Sunday the 27th morning and arrived at Jaffna around 6:00 PM

This is the story of another round of suppression …..