Blood is thicker in politics: UPFA nominations a family affair 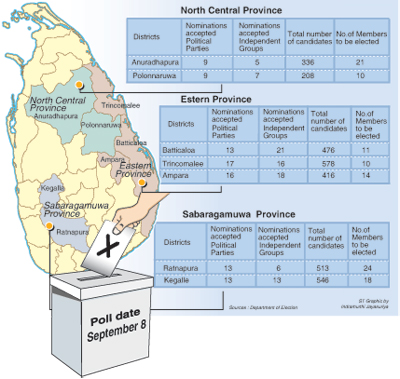 Despite the governments’ assurance that no relatives of politicians would be allowed to contest the upcoming provincial elections, several of them have received the ruling party nominations.�Health Minister Nimal Siripala de Silva had earlier said the decision to keep relatives out of the provincial elections was aimed at encouraging young politicians to enter active politics.

However, the UPFA nominations lists show several relatives of ruling party politicians have received nominations to contest the September 8 elections for the North Central, Sabaragamuwa and Eastern Provincial Councils:
Here are some candidates who are close family members of UPFA stalwarts.

Explaining the shift in the Government’s policy, Minister John Seneviratne told the Sunday Times yesterday that although they made such an announcement earlier, they could not reject candidates who were relatives of the ruling party politicians point blank. “If they have some history of working for the people and have been in politics for some time, then they are eligible to be a candidate,” he said.

“But we will reject applications from relatives of politicians if they decide to contest suddenly without any political background,” the minister said.

In another controversial move, the UPFA’s Trincomalee politician Ariyawati Galapatti who has been remanded for contempt of court has also been given nominations to contest the Eastern Provincial Council elections.
ST