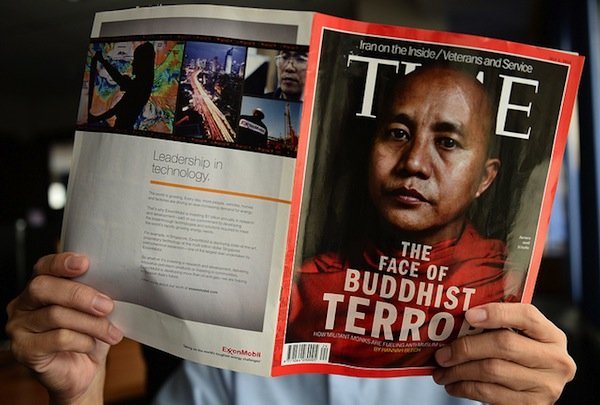 
The Face of Buddhist Terror, cover story of the most recent issue of Time magazine, is banned in Burma. Even though the lead article is primarily on U Wirathu, the leader of the 969 Buddhist Nationalist movement and only has passing reference to Islamophobia in Sri Lanka championed by fascist Buddhist “monks”, the issue is currently held up by Customs in Sri Lanka and unlikely to reach subscribers or bookstores.

Wirathu’s comments against Muslims are clearly documented, and well before this issue of Time. Equally well documented, particularly post-war, are Sri Lanka’s own fascist “Buddhist monks” – their open violence and promotion of hate, their blatant lies, the complete impunity they enjoy (even when openly caught on video), their heinous statements, the ready audience the President affords them no matter what they do and say and the all-powerful Defence Secretary Gotabaya Rajapaksa’s close association with one of the most rabid groups, the Bodu Bala Sena (969′s local equivalent).

An online poll featured on Groundviews in April this year clearly flagged the serious and growing concerns over the Islamophobia in Sri Lanka, particularly post-war. Violence against Christians is also, disturbingly, quite prevalent.

And yet, while all this is going on within the country, it’s international media coverage that has the government in a tizzy. This is not the first time the Sri Lankan government has blocked at Customs magazines of international repute critical of the ruling regime and the country’s growing democratic deficit. Mind-bogglingly, the regime actually believes blocking copies of the magazine curtails the distribution of critical content – analog censorship operating in a digital world. As we noted when print editions of the Economist were blocked in Sri Lanka,

Furthermore, Gotabaya Rajapaksa recently asserted that Sri Lanka is “a democratic nation with an extremely popular political leadership that enjoys a very large electoral majority”. This begs the question as to why this same popular leadership with a large electoral majority is so nervous about articles like those in Time magazine and proceeds to censor, control and contain the spread of information?

Easily and freely available to any subscriber of Time magazine in Sri Lanka (on their mobile devices or through Time.com on the web), the The Face of Buddhist Terror reproduced below and available as a ZIP file here (11Mb). Reading it, ask the government why a single lead story, published in English, with limited circulation amongst a small socio-economic group mostly in and around Colombo or the Western Province, sans translation into Sinhala or Tamil, and moreover, easily accessed digitally, is fit to be blocked at Customs? Is the regime really this insecure?  Why does a single lead story of Time magazine upset government enough to take action and yet the fascism of “Buddhist monks”, captured in domestic media and for much longer, condoned?

Does any of this, even for ardent regime supporters, make any sense at all?