Black July 1983: No accountability even after 35 years! 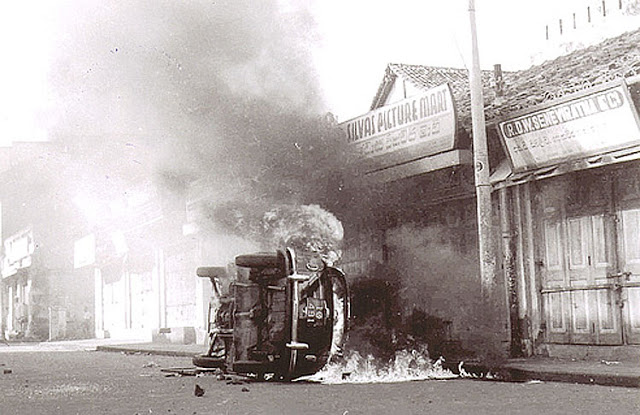 This week we commemorate the 35th anniversary of the Black July pogrom in which state-sponsored Sinhala mobs attacked Tamils in Colombo and elsewhere killing approximately 3000 Tamils and displacing over 200,000.

35 years have passed and to date, there has been no accountability for this horrific week of genocidal violence, nor even an attempt at an official apology or comprehensive reparations to the Tamil community for the insurmountable losses it suffered and continues to suffer.

While many have tried to frame Black July as provoked by the LTTE’s attack on a military vehicle transporting 13 army soldiers in Jaffna on July 23, 1983, the large body of credible historical and anthropological work leaves no doubt that the pogrom was part of a systematic pattern of attacks on Tamils that were incremental and built on riots against Tamils that occurred in 1956, 1977 and 1981. Many testimonial accounts of the violence of July 1983 describe the existence of lists of Tamil businesses and voters which those leading the mobs had in possession, clearly signalling the pre-planned nature of these attacks. For several days, then President Jayawardene said and did nothing to quell the attacks, and ultimately on the fifth day of riots on July 28, 1983, only sought to justify Sinhala mobs’ actions saying they were the “expected reaction of the Sinhala masses to Tamil demands for a separate state.” On the sixth day on riots, the military began taking Tamils from Colombo to Tamil majority areas, confirming Tamil fears that Sri Lanka was not safe for them. The genesis of the vast Tamil diaspora has its roots in the 1983 pogrom which forced thousands to flee.

The 1983 pogrom marked a definitive stage in the violence sponsored and unleashed by the State which then transformed into state military-led-violence during the civil war leading to Mullivaikkaal in 2009.

1983 was a symptom of the deeply Sinhala Buddhist state. A systematic answer to 1983 should have led us to a retransformation of the state along plurinational lines. But the contrary was true. As we speak about ‘transitional justice’ today it is important to remember that no one has been brought to book for the 1983 atrocities. No accountability, no truth telling, no reparations and hence recurrence at a genocidal scale. The Sri Lankan government’s continued failure to address the atrocities of Black July is symbolic of its larger failure to address impunity, the Tamil question, and the root causes of the conflict.

As we remember the thousands of victims of this horrific pogrom this week, we re-affirm our commitment to seeking justice for the atrocity crimes committed that week and throughout the conflict