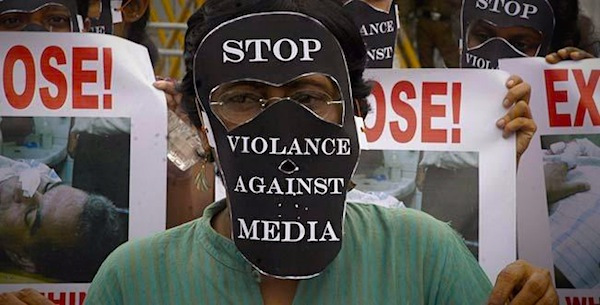 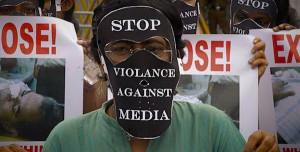 The month of January is coming to and end. January marks a number of major attacks that have taken place on media freedom in Sri Lanka. For this reason, January is referred to as the ‘Black January’ of media suppression. This year too, journalists’ organisations in the country are commemorating Black January as an event to mark continued suppression of independent media and journalists in Sri Lanka.

What follows is an incomplete list of attacks on media and journalists that took place in the month of January since 2005. Not a single case of killing, assault or arson listed here has been investigated to completion and culprits brought to book.
January

1st: Editor of the Sunday Leader revealed that there is a plan to assassinate the owner of Sirasa Network. (2006)

1st: Member of Parliament T. Maheshwaran was shot dead. He was murdered just few hours after he made a statement saying that he would, in the near future, reveal in the Parliament the State and Para-Military organisations which were behind killings in Jaffna. (2008)

2nd: The former Chairperson of Sri Lanka Working Journalists Association had to flee to a European country for the safety of his life. (2013)

3rd: Commander of the Sri Lankan Army at the time, Sarath Fonseka, stated that the only obstacle to win the war was a handful of traitorous journalists. (2008)

4th:The president imposed a state of emergency on 04th January 2005. Issuing a statement FMM expressed its concern on the implications of emergency rule for freedom of speech in Sri Lanka. In the proceeding years FMM proved right and the emergency rule became one of the main tools of media suppression. The emergency regulations continue to date with some of the repealed sections (2011) incorporated in to the PTA, the Terrorism Prevention Act. (2005)

4th: A. Daniel, an Internet based journalist in Jaffna, was arrested and interrogated for 3 hours for having allegedly exposed in a news item that the Governor of Jaffna had imposed an interdiction on a British Parliamentarian who was visiting Jaffna. (2012)

5th: The CID interrogated Joe Jayakumar, the photographer of Weerakesari, on the photographs related to war published in the paper. (2006)

5th: The Jaffna office of Yal Thinakkural paper was raided and searched by the Military. (2006)

5th: Former journalist Lalith Seneviratne and Sisira Priyankara and Nihal Serasinha, journalists attached to the trade union monthly Akuna were abducted. They were accused of being connected to LTTE and tortured in custody. However no charges have been filed till now. (2008)

6th: An armed group belonging to a political party threatened the Udayan newspaper to shut down. A serious threats against the paper followed. (2008)

6th: A armed attack of a military style took place on the MTV/MBC studio complex. Even prior to the start of investigations the Defence Secterary stated that this was an “inside job”. A local politician of UNP was arrested for allegedly being connected to the attack and was later released. (2009)

7th: The verbal attack on the journalist Sri Ranga, who was at the time a Director of Shakthi TV, by Parliamentarian Douglas Devananda who claimed Sri Ranga was a terrorist attached to LTTE. Repeated threats to the life of Sri Ranga followed. (2008)

7th: The house of Poddala Jayantha, journalist and then General Secretary of Sri Lanka Working Journalists Association, was visited by a group of policemen in civil attire during night. No protocol had been followed with regard to this house call. (2008)
7th: Judicial Service Commission condemned the continued insults against the judiciary and the Chief Justice carried out by state controlled media. However the defamatory campaign by the state media did not stop. (2013)

8th: Editor of the Sunday Leader at the time, Lasantha Wickramatunga, was murdered by unidentified gunmen on four motor bikes. He was a leading critic of the regime at the time. (2009)

8th: Opposition leader Ranil Wickranatunga criticized Sri Lanka’s English news papers and threatened that the papers should be brought before the Parliamentary Privilege Committee. He mentioned that the newspapers distorted his speeches. (2013)

9th: The inaugural march of opposition coalition led by M.P. S. B. Dissanayaka, in Nugegoda, Colombo was disturbed by a group led by Minister Mervin Silva. Journalists who were covering event, Gnanasiri Koththigoda an Ajith Seneviratne were assaulted. (2007)

10th: An pro government armed group attacked the peaceful march started in the proximity of court complex in Hultsdorf which was organised by Sri Lanka Bar Association. The police ensured the safety of the gang. (2013)

10th: A worker who was distributing the most popular Tamil newspaper in Jaffna , Udayan, was assaulted by a gang of motor cyclists. His motor-bike and the pile of papers to be distributed were set fire to. (2013)

10th: Letters with death threats were sent to three journalists in Mannar, A. T. Mark, S. R. Lambert and N. J. Belesthus, who had published reports critical of Minister Rishard Badurdeen who organised a protest against the judiciary. (2013)

11th: P. M. M. A Kadar, one of the most senior journalists in Ampara was hospitalized after a serious attack by a politician of the governing party. He was attacked while he was collecting information on internally displaced persons. (2011)

12th: Popular and dissenting web site, LankaNewWeb, stated that it is continually being attacked by Hakers. Sri Lankan Government had banned the website earlier. (2012)

13th: Police made a surprise raid at the office of the Sunday Leader newspaper during the presidential election period. No incriminatory evidence found. (2010)

15th: Mohan Peiris, who uttered a blatant lie to the United Nations that journalist Prageeth Eknaligoda, who was made to disappear, lives in a foreign country and did not complete any investigation on murders of journalists while he was the Attorney-General, was appointed Chief Justice. (2013)

15th: Police barred many journalists who went to report the former Chief Justice Shirani Bandaranayake leaving her official residence and police blocked her attempt to speak to the journalists. (2013)

15th: A group of people in Military uniforms and civil attire launched a used engine oil attack on some members of the Equal Rights Movement, journalists and civil society groups who were conducting a signature campaign in Jaffna. Earlier of the day a group attacked the vehicle of the members of Equal Rights Movement travelling to Jaffna fled amidst police protection. (2013)

16th: It was reported that the editor of the Government controlled paper, Silumina, requested to ban websites that disseminate dissenting ideas. (2013)

16th: Chandima Alwis, a reporter of Mawubima based in Katharagama, was attacked by a Provincial Council member of governing party named Aththanayaka, against a report he published. (2012)

17th: A bomb attack on Thinakkural Residence in Jaffna, owned by Thinakkural newspaper caused considerable damage. It was reported that the purpose behind the attack was to stop a scheduled media discussion against disappearances in the North. (2012)

18th: Inland Revenue Department called upon the offices of Mawubima and Sunday Standard newspapers. Separate businesses of the owner of Sunday Standard was also raided and the list of organisations which provide advertisements for the paper were taken. Due to suppression that continued later, both the papers had to be close down. (2007)

22nd: A journalist allegedly attached to LTTE, Prakash Shakthi Pillai, was arrested at the airport. President stated, at a meeting with press owners, that Pillai, an LTTE cadre, had been provided with a fake journalist identity card by FMM convenor Sunanda Deshapriya. He had been arrested due to a fake ID he had created himself. No one knows what proceeded. (2009)

24th: S. Sugeerdharajan, a journalist in Trincomalee who provided photographic evidence to show that 5 Trinco students had died of gun shot injuries of close range, was shot dead. Military was accused by many as the culprits. (2007)

24th: A motorcycle gang attacked the editor of Rivira newspaper, Upali Tennakoon with sharp weapons. Attackers had to flee as his wife started to shout. Before leaving the country Mr. Tennakoon stated that police did not attempt to arrest the suspects. (2009)

24th: Journalist Prageeth Ekneligoda of LankaeNews was abducted and made to disappear. State media and govt politicians launched massive campaign saying that Eknaligoda is in voluntary hiding. (2010)
25th: Defence Secretary mentioned to a newspaper that media control is essential and it is absolutely unnecessary to write about the military. After the pronouncement fatal attacks were launched upon two journalists who produced critical reports on military operations. (2008)

25th: Journalist Lal Hemantha Mawalage, a producer of Sri Lanka Rupavahini Corporation, was assaulted with a shape weapon while he was on the way home at night. His right hand was severely injured and he was subjected to surgery. This attack was considered a revenge on the journalist community’s resistance against Minister Mervin Silva’s forced entry to Rupavahini Corporation on the 27th December 2007. (2008)

28th: Assistant editor of the daily Thinakaran, Zuheeb M. Cassim, was attacked with a dagger. Prior to the attack, Chairperson of Lakehouse had transferred Cassim and the attack was considered to be related to that event. (2008)

28th: Chandana Sirimalwatte, the editor of Lanka newspaper was arrested. He was released on the 16th February without charges. (2010)

28th: Prgramme Producer of Rupavahini Corporation, Ravi Abeywickrema, was assaulted by its Chairperson. The reason behind the attack was the protest conducted by the media community urging a balanced election reporting during the presidential election. (2010)

29th: Media employee of Sri Lanka Rupavahini Corporation, Dulip Dushyantha’s house was forcibly entered by two gunmen at night with the intention of killing him. This was also considered a revenge on the journalist community’s hostility against Minister Mervin Silva’s forced entry to Rupavahini Corporation on the 27th December 2007. (2008)

29th: Reports appear saying that it has been decided to cancel the licence of MBC/MTV Network as it supported the presidential candidate Sarath Fonseka. However later, it was decided not to implement the initial decision. Today the network is considered as a pro Government institution. (2010)

29th: The office of Lanka newspapers attached to JVP, which also supported Sarath Fonseka during the presidential candidate, was sealed by the police. Later it was unsealed without charges. (2010)

31st: The office of Lanka E-News, a popular trilingual web site, was set fire to by a group of unidentified thugs. Official computers and the priceless library were completely gutted. Later its editor had to flee the country for safety. (2011)
To be continued…
GV