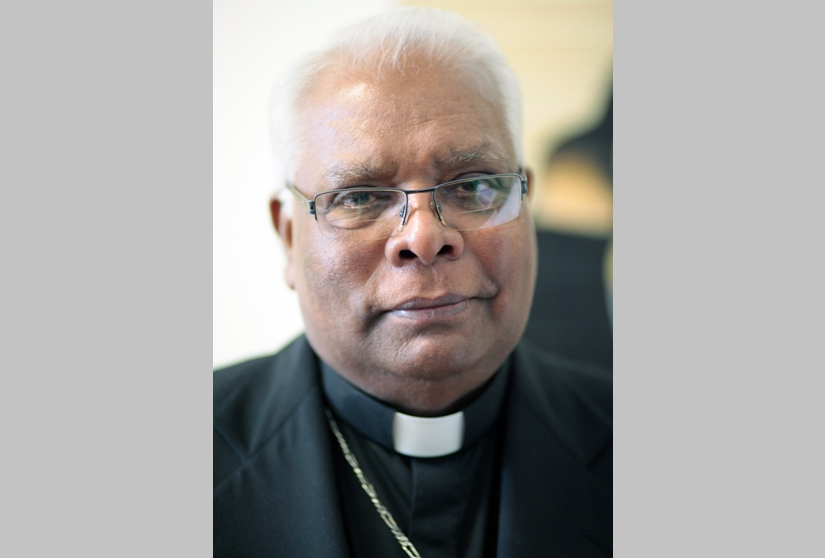 A Tribute from an Ecumenical Colleague

This tribute is written on Good Friday of 2021, a day that is significant for all Christians and especially for us who have been bereaved by the passing on of our dear friend and colleague Rayappu Joseph, the true and undoubtedly the genuine disciple of Jesus Christ. As we commemorate the crucifixion of Jesus Christ, my mind goes back to what Jesus quoted from the Hebrew Scriptures, before he began his public ministry. From the book of the prophet Isaiah he read, which is well known as the Nazareth Manifesto of Jesus Christ,

“The Spirit of the Lord is upon me, because he has anointed me to bring good news to the poor. He has sent me to proclaim release to the captives, and recovery of sight to the blind, to let the oppressed go free, to proclaim the year of the Lord’s favour.” Luke 4:18-19

Bishop Rayappu understood this portion of scripture well and correctly, in the depth of its meaning. He was aware that he had been anointed for a special calling. His calling to be a Bishop of the Church is explained as an ‘Overseer’. I have no doubt that he, in his formation prior to becoming a Bishop, had the authentic understanding of the scriptures. He would have had a comprehensive understanding of the purpose and God’s expectations of his calling. His obedience to God’s calling, first and foremost made him a disciple of Jesus Christ. He was aware that the discipline of the disciple is to continue to be obedient, to keep God’s guidance and the vision of God, uppermost in his mind. That is why he was never a wavering person. His mind and his work could never be influenced by any of the powers that be. His deep commitment to the truth and to the suffering of God’s people, irrespective of where they belonged to, was evident in the firmness with which he was willing to put his body on the line.

A Leader called by God

It was at God’s chosen time, and was the Kairos moment that Bishop Rayappu was called to the leadership of the Church. As his Master taught him he had the preferential option for the poor. In the Nazareth Manifesto, it is said that ‘he had anointed me to bring good news to the poor’. The ‘poor’ here does not mean only the economically poor, but all those who have been discriminated against. What is this ‘good news’ that is spoken here? It is the Good News of Jesus Christ, the good news of freedom and the year of the Lord’s favour. Jesus also quotes about proclaiming the release to the captives and the recovery of sight to the blind and to let the oppressed go free. Why was the release to the captives, uppermost in the mind of Jesus?

During the time of His ministry as well as today, there were and are many captives to whom justice and freedom are denied. Suppression continues for the benefit of the authoritative administrators of God’s people. Injustice prevails all around us. Injustice prevails even against God’s creation and we are only silent observers, because we don’t want to rub people on the wrong (or the correct) side. Our survival, existence and the greed for favours have taken precedence over truth and justice and above all our obedience to the Holy Scriptures. There is also the recovery of sight to the blind. Who are the blind in our societies? In addition to those who are physically blind, there are the people who do not want to see, who are indifferent to seeing the truth, whose intelligence is such that they do not have the capacity to grasp the truth. Some people are seeing with blinkers of all colours whose sights have been blurred by their affiliations. It is in such a historical background that this ‘one of a kind’ person, is called by God to be God’s representative in the midst of God’s people.

A Leader who reached out and was outspoken

Rayappu Joseph became the only leader who could understand the human suffering without any biases. In the Anglican prayer book, reference is made regarding a clergyperson who will be assigned a parish and a congregation. The congregation is referred to as the God’s people who have been committed to his or her care by God. It is true that he spoke on behalf of his people who have been committed to his care by God. That was his immediate concern. But it went beyond the limitations of race, religion and colour. We are aware of the number of times he appealed to the majority community, to take the initiative in solving the conflict, for the sake of our beloved nation. His struggle was both within the church and the nation. He was termed a traitor of Sri Lanka, an unpatriotic religious leader and a rebel against the powers that be. However, his prime concern was the people of Sri Lanka, without any differences. His utmost commitment was for the undivided land of Sri Lanka, as well as for the one nation and an undivided people. I believe it is now time to say that he has been the most misunderstood leader in the recent history of our nation. The result was the sad suffering of a paradise nation.

An ecumenical leader par excellence Rayappu Joseph, had the ability to see and act beyond his own Christian tradition. He received the leaders from sister denominations with much love and affection and was genuinely willing to work and stay in solidarity with them, for the common good of his people. His understanding of ecumenism went even beyond all Christian denominations. Many a time, we have seen him voicing his concerns for those who had been committed to his care by God, together with leaders of all faiths. Such engagement was never meant to display any popular intentions. He was genuinely a person who accepted everyone and rejected none. His ability and willingness to work with all those who were even different from him, were qualities bestowed upon him by God. They were also marks of his humble obedience to God’s calling.

Meaningful Ministry beyond Self

In his last major interview in January 2014 Bishop Rayappu said, “I have given priority to embrace, speak about and address the aspirations and struggles of people living in my diocese and more broadly in Sri Lanka. It is in this line, and in line with Jesus’ mission to bring good news to the poor, that I talk about people who disappeared, who are tortured and killed in custody, those whose lands are occupied illegally etc. If you or anyone else calls this as doing politics, so be it. For me it is my spiritual, religious, humane mission”. These words of Bishop Rayappu, speaks volumes for the man of deep spirituality.

On another occasion he said, “What can I do, when I am referred to as a tiger and a separatist against Sri Lanka, when I care for the poor and fight for justice?” I do not care too much for that, but will raise my voice against injustice and fight against violation of Human Rights. There was no other person who was able to speak and challenge with equal vigour, to the people of the region who were looking forward to his help and assistance, as well as to those who have exhausted all aspects of peaceful interventions and resorted to violence. He was never a person who endorsed violence.

Forgiveness, a necessity for Reconciliation and Healing

Jesus spoke from the cross and said, “Father forgive them, for they know not what they do”. That was the way he showed all his followers, that they should not have any anger, animosity or bitterness against those who persecuted them. This also meant that Jesus was ready to forgive those who persecuted him. The words of Bishop Rayappu above, speak in the same tone of forgiveness. He did not speak about taking revenge. But he admitted that there was nothing that he could do about it. His sense of forgiveness was amply displayed, even though he did not speak it in words that you and I will understand.

He was a much loved and a disciplined leader. Loved and cared for by ‘one and all’, who awaited his leadership on their behalf. I have personally experienced that in my visits to his home, the Bishop’s House in Mannar. I have had the privilege of staying in his home and enjoying his generous hospitality. Long conversations round the dining table, were most productive and educative. My response to him has always been to a respectful, appreciative and a grateful one, to a senior colleague. How much have I learnt from his humility and the determination to follow his Master, in the mission that the Master had called him to. His hospitality went beyond personal gains. The Bishop’s House was always open to people of all shades and diversities.

It is with deep appreciation and gratitude that we take this opportunity to thank God for his life and ministry, amidst God’s people. Thank you my brother, for all what you have been to us, and to God’s people. Do continue your journey of Life, in the nearer presence of your Creator. May your soul Rest in Peace and Rise in Glory.