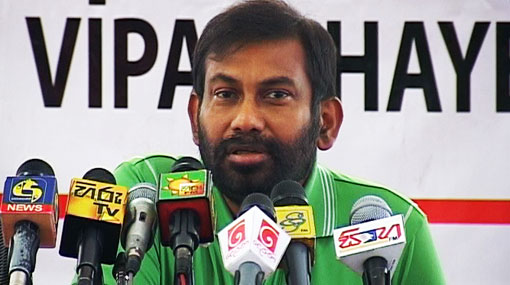 by Nirmala Kannangara.
The good governance administration is now embroiled in a controversy after being exposed that a Cabinet minister had allegedly secured Cabinet approval to get a government contract to a company owned by his offspring.

Minister of Primary Industries Daya Gamage is accused of obtaining a government contract for rural road rehabilitation and renovation in the Kalutara District at a cost of staggering Rs.3.639 billion without mentioning that the company the Cabinet approval was sought is owned by his family.

Although Gamage is a road construction contractor even before he entered politics, it is questionable as to why he obtained these two contracts for his company as it is conflict of interest.

“Being a minister in the good governance regime, what made him to send quotations to the Road Development Authority (RDA) for a contract to rehabilitate around 180km-road network? As we all know, he has a construction company that had rehabilitated and constructed many roads in the country. But being a Cabinet minister now, Gamage should not have got his company to send quotations to a government contract. Although neither Minister Gamage nor his wife who is also a Minister in this Cabinet are not Directors of Olympus Constructions, they may have influenced the Highways Ministry to get the contracts,” RDA trade union member told The Sunday Leader.

The sources on conditions of anonymity said that it is up to the party leaders to decide whether granting these two contracts to Olympus Construction (Pvt.) Limited which is said to be owned by the Gamage family is ethical and in line with the assurances they gave to the people of this country prior to the 2015 presidential election. These two contracts have been offered to the said construction company which is a joint venture with an Indian Company – Rani Constructions (Pvt.) Ltd.

One project is to rehabilitate 89 kilometers of rural roads at a cost of nearly Rs 1.81 billion without taking into consideration the Value Added Tax (VAT).

The second project (cost over Rs. 1,817 billion excluding VAT) which too is to rehabilitate and reconstruct another rural road network (94 kilometres) is also in the Kalutara District.

On June 3, University Education and Highways Minister Lakshman Kiriella had submitted a Cabinet paper to obtain Cabinet approval for 18 road projects. Of the 18 projects, the last two projects have been offered to Olympus Construction (Pvt.) Limited which is alleged to be owned by Daya Gamage family. According to the sources, this company was earlier owned by Daya Gamage, but the ownership had been changed after UNP came into power last year.

However, Higher Education and Highways Minister Lakshman Kiriella when contacted said that Highways Ministry has not violated any government procurement guidelines and had offered the 18 road construction projects for the lowest bidders considering their technical capacities.

According to Minister Kiriella, all these 18 road projects are constructed under the supervision of the Asian Development Bank (ADB).

“The ADB monitors these construction works and no one play out the contracts,” the Minister claimed.

Minister Kiriella, however, said that he had to ask Chairman RDA to refer the contract details to the Attorney General for his advice.

“If you call the RDA Chairman, you will be able to get all these details,” the Minister said.

“Of all those who have quoted for the tender, we opened only the applications that have the necessary technical qualifications. These quotations were opened on January 12 this year, and Olympus Constructions had quoted the lowest prices for nine projects. But under the ‘least cost to the client’ system, the 17th and the 18th contracts were given to Olympus Construction and the rest to many foreign constructors,” Chairman RDA Nihal Suriarachchi told The Sunday Leader.

When asked whether RDA was not aware that Olympus Construction was a family business of Daya Gamage, Suriarachchi said that although everyone knew that Daya Constructions changed its name soon after the change of government last year, he was exactly not aware of what the name of the new company was.

“When we selected the 18 companies, we presented a Cabinet paper to obtain the Cabinet approval. Later we published the list of names in State print media. After this only, the media exposed the connection of Olympus Constructions with the Gamage family. When this was highlighted in newspapers and on websites, Minister Lakshman Kiriella immediately wanted me to get the share holding details of this construction company in question from the Company Registrar where the owners name had been given as Gamage’s daughter and son. Then I was instructed to refer all these details to the Attorney General for his observation and recommendation to find out whether it is illegal to offer such a large tender to a company owned by the offspring of a Cabinet minister. So I referred all these documents to the Attorney General on Thursday June 30 and am waiting for his advice,” Suriarachchi said.

When asked, whether the Highway Ministry abide by the directives if the Attorney General instructs not to offer the two tenders to Olympus Constructions, the RDA Chairman said that in such an event, this has to be notified to the ADB. “We have to inform the ADB that these two tenders cannot be offered to this company on the instructions of the Attorney General,” Suriarachchi added.

This newspaper was not able to contact Minister Daya Gamage since he was out of the country. A text message was forwarded seeking a comment, but he did not respond to our message.
Sunday Leader