Beyond Imagination in Service to Humankind: Medical Administration and Relief within the Vanni Pocket, January to mid-May 2009

Amidst the obfuscations and cumulus clouds of propaganda that have subsumed reviews of the last stages of Eelam War IV, it has taken time for some remarkable feats to emerge. The affidavit provided by Dr. Veerakanthipillai Shanmugarajah on 10th May 2012 with assistance from a British solicitor reveals astounding medical relief work by a body of doctors, nurses, attendants and administrative aides during the Tamil peoples’ enforced retreat and crucible of battle in 2009.
This statement has been deployed by a collective named ENGAGE SRI LANKA in the course of its criticism of Channel Four’s video reportage and the claims of “Vany Kumar” (Gnanakumar Thamilvani in name,[1] who also presented herself under such aliases as “Damilvany” and “Vany Kumar”). As such, it is an element in the ongoing propaganda war – one which no public document can rise beyond.

However, my focus here is directed towards a larger dimension rather than seeking to demolish the fabrications and distortions perpetuated by Tamilnet, Vany Kumar and Channel Four which is the interest pressed by Engage Sri Lanka (2013 for latter). I will be focusing upon the empirical detail and the ‘lens’ provided by Shanmugarajah’s affidavit account of 10th May 2012.
I do not merely report. I marvel. I wish you, too, to marvel and applaud the dedication and capacity revealed by a substantial (and mostly unnamed) team of unsung Tamil heroes. I do so in point form with numbers identifying the segments in Dr. Shanmugarajah’s statement that provide the empirical foundation for my review. The sections highlighted in purple are contextual elaborations and contentions that embody my thoughts.

[1] Born on 1 June 1984 at Nelliyadi in the Jaffna Peninsula Thamilvani moved to Britain in 1994 and became a biomedical technician. She came to Jaffna on 28 March 2008 and arrived in the Wanni on 20 June 2008.  She survived the war in the Vanni Pocket and was among those who moved out in the second large exodus in May. She was thereafter housed at the Ananda Coomaraswamy detention centre till released(?) on 29 September 2009.
[2] This figure is a post-war estimate that works backwards from the number of civilians and LTTE cadre who survived and approximate computations of those that died (see IDAG 2013). A significant aspect of this war was that few had a precise or definitive figure of the number of people who were corralled by the LTTE. Thus, in October 2008 Ravi Nessman referred to 220,000 people (2008). This uncertainty even in UN quarters within Si Lanka was because of LTTE manipulations of numbers and the suspicions on this score in UN circles. Bishop Rayappu was (and remains) among those who contributed to this process by an outlandish act of chicanery when he outlined figures that led to the conclusion that the total population amounted to around 436,000 (see IDAG 2013).
[3] Also see Roberts, “Blackmail,” 2012a.  It is significant that (as far as I am aware) few analysts, journalists or bloggers have challenged the argument pressed in this article since it appeared in April 2012.
[4] Information from a young Tamil who was in Jaffna in the 1980s and 1990s.
[5] The first three survived and slipped out of the Manik Farm detention centres to locations abroad; but Malaravan, Sivamokan and Sathiyaa are believed to have died (information from a Tamil friend who has lived in the north throughout his life). One “Dr Siva,” a psychiatrist, is reported to have been killed by a bomb in Harrison 2012: 82).
[6] Email from Dr. T. Sathiyamoorthy, 30 December 2013. He added that “some of them died and a few are still in Sri Lanka.” The doctor called “Niron” who provided Frances Harrison with a tale in line with the threads perpetuated by Tamilnet is probably one of these medics and he managed to slip away from the detention centres.
[7] See Clause 6 in Affidavit One by Dr. Shanmugarajah, dated 19 September 2011 in Engage Sri Lanka 2013: 202-03. It is not clear whether this process of movement across borders was possible in, say, 2008 or even 2007.
[8] My interview with Sarasi Wijeratne of the ICRC in Colombo, 15 June 2013.
[9] The moral crusaders of Amnesty International, HRW, ICG, CPA and other such agencies continue to adhere to this imposition. On this score they are on the same imperial plane as the government of Sri Lanka for the period 1995-2009.
[10] As Muralidhar Reddy told me (in April 2009), when Eelam War IV started in 2006 these people had no reason to regard GSL with any empathy or loyalty. I agree. Also see Roberts, “Towards Citizenship,” 2013: 66-70.
[11] UNOCHA and Ministry of Defence figures show that 3,484 deemed “civilian” escaped in January and 31,694 in February making 35,178 in total. 24, 613 left the embrace of the LTTE in March. Citizen Silva estimates that there was a total population (including Tiger personnel) of 298,00 on 1st March 2009 and 272,000 on 1st April ( email comunication, but see IDAG 2013 for details).
[12] As I have argued, the assembling of people along the coastal stretch was intended to prevent an amphibious landing by the forces of GSL and also to leave open the option of sea escape with international aid (Roberts, “BBC Blind,”2013).
[13] See the images in Roberts, “Congestion,” 2013g.
[14] A pungent comment by an ex-Tamil militant who, together with his family, was part of the populace till May 2009 (my interview in November 2009 in the north).
[15] A few of the patients queuing for medical attention dropped dead in the line-up during the early days in April-May (interview 13 Nov. 2010, with Dr. Donnie Woodyard who was part of the team seeing about 5000 patients per day at the outset).  Also see graph of the death toll — above 5 per day from mid-May to mid-July, but declining always and then becoming less than five from mid-July (graph from the Ministry of Health). 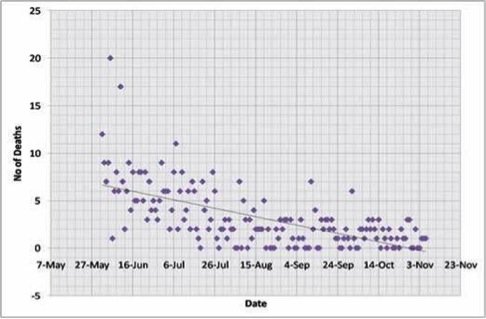 [16] Interview with Dr. Hemantha Herath, Ministry of Health, 16 May 2010. Herath was in overall charge of the medical programme at Manik Farm.
[17] Professor Wickremagamage is the current Head of Geography and an expert on GIS and remote sensing.
[18] In contrast, a Tiger doctor, the 47-year old bearing the pseudonym “Niron,” presents a death toll of “at least 27,000  in five months” – a figure he has now (in 2012/13) revised “upwards” (Harrison 2012:  88).
[19] One can add: on good grounds arising from the killing and intimidation of journalists as well as the undermining of the rule of law. See also Roberts, “The Rajapaksa Regime and the Fourth Estate,” 9 December 2009, www.groundviews.org.
[20] I have yet to locate any reports or images that Nessman circulated in January, though his earlier news item is in my briefcase.
[21] Intrepid reporters occasionally do gain access to the side of the “enemy” or fighting action (one being the Sindhi photo-journalist Shyam Tekwani — see Ross 2010). But this usually occurs where there are no war fronts manned by entrenched armies and where fluid battle lines prevail. These are the battle terrains where journalists like Marie Colvin die – for example in the Balkans in the 1990s, in Libya recently and in Syria and Sudan now in 2013/14.
[22] For the benefit of the uninitiated, the concept “Orientalism” refers to the range of beliefs in European circles during the expansionist imperial era which held “the East” to be stagnant and effete. It is inspired by the path-breaking writings of the Egyptian scholar, Edward Said.
[23] Note some of his dubious claims: [A] about 2000 shells landed near Uddayarkartu hospital in the last ten days of January” (Harrison 2012: 76); [B] “The doctors reported many cases of children starved to death” (2012: 79); [C] “they hadn’t a single bottle of intravenous  fluid, antibiotic or anaesthetic to do life-saving surgery” (2012: 80); [D] “he believed [the bomblet he saw]  belonged to a cluster bomb – a weapon he and others saw several times …” (2012: 81); [E] he believes “the SL government was  using white phosphorous  …” (2012: 83) and, finally, after he was captured, the most revealing LIE of the whole lot: as an ordinary IDP he had only got a drink of water when he reached Manik Farm (2012: 86). Since he was in the last big batch of some 80,000 or more IDPS to be taken from the warfront to Vavuniya in mid-May, they would have been among those who reached the staging post at Omanthai where a massive feeding operation involving WFP, Sewalanka and the SL Army saw some 550,000 food parcels cooked by teams of cooks working on roster s for 24 hours for distribution to the IDPS (Roberts, “Omanthai,” 2010c
Share
Facebook
Twitter
WhatsApp
Pinterest
Email