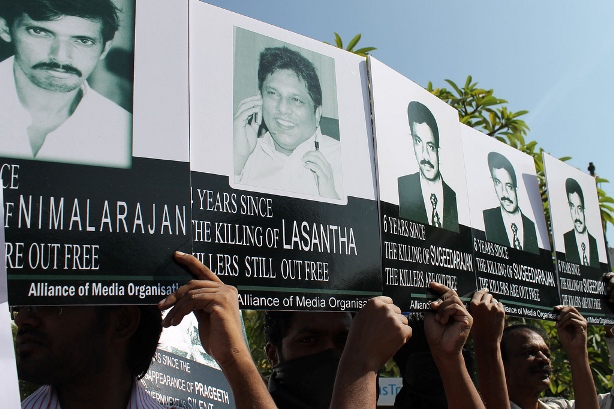 All of a sudden, the government has evinced a keen interest in media ethics. It is apparently in a mighty hurry to introduce a code of ethics for journalists in keeping with its ‘laptop and stick’ approach to controlling the so-called Fourth Estate. Is it because its laptop method has failed to yield the desired results that it has chosen to use the ‘stick’ of ethics in dealing with the media? Copies of a draft code of ethics formulated by the government have been sent to political parties for their perusal, we are told.

What have politicians got to do with media ethics? We thought it was only servility that they expected of journalists. They are no great lovers of media personnel and there is hardly any political party which is not responsible for crimes against journalists. Hands of some SLFP, UNP and JVP politicians are dripping with journalists’ blood as is public knowledge. Dozens of journalists have died violent deaths at their hands during the past few decades. Other political parties have aided and abetted perpetrators of crimes against the media either as their mouthpieces or as constituents of coalitions led by them.

There is no difference, in our book, between politicians extolling the virtues of ethics and prostitutes pontificating on chastity! It is the rowdies in politics, like cattle rustlers and bootleggers, who need a code of ethics/conduct more than anyone else. Parliamentary standards are deteriorating at an alarming rate; slanging matches and fisticuffs pass for debates. Political legends who adorned the national legislature in days of yore would spin in their graves if they knew what has befallen that institution. The less said about the provincial councils, the better; their members meet only to gormandise at the expense of poor taxpayers! Local council members are busy sexually assaulting women and roughing up the guardians of the law. The worst culprits are the UPFA politicians who have risen above the law by virtue of being at the beck and call of their political masters. In Embilipitiya, a UPFA PS member who set upon two policemen in public had been moving about freely for days with the police looking the other way before giving himself up yesterday. Had a lesser person set upon the police in that manner, he would have been caught in next to no time and made to rue the day he was born.

True, there are bad eggs in every profession and the media has its fair share of them. There are some sick elements in the garb of journalists who need to be dealt with for slander and libel and other unethical and illegal practices. There are remedies available for their victims, though the draconian criminal defamation laws have been done away with. What this country needs urgently is not the formulation of a code of media ethics but the restoration of the rule of law.

If the government is so keen to set ethical standards for journalists by fiat, let the UPFA pundits make the state media adopt their code of ethics first. After it is thus pretested for its efficacy, it may be offered to others if the standards of the state media improve tangibly.

Before laying down ethical guidelines for the media, the government ought to bring to justice those who have assaulted and killed journalists and carried out arson attacks on newspaper offices and TV stations. None of the investigations into such unfortunate incidents have been concluded and the perpetrators are still at large with the government trotting out lame excuses.
IS