BBS & Goatabhaya Connection – A Myth Or A Reality? 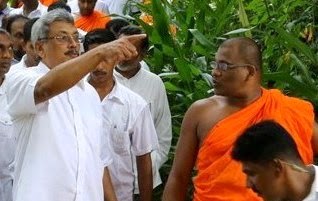 Special Correspondent
Today Muslim community is at cross road in Sri Lankan Muslim history. No doubt an abrupt appearance of BBS out of blue sky in Sri Lanka is a bewildering mystery for many Sri Lankans. Many conspiracy theories were reported in relation to the origin and development of BBS. Some argued that a Norwegian agent was plotting to create mayhem in Sri Lanka. They substantiated this argument with Gnanasara thero’s visit to Norway and subsequent meeting with some diaspora people over there. Some others argued that a Burmese Buddhist extremist is behind these all anti-Muslim violence in Sri Lanka and Burma.

They have also substantiated their argument with some photo clips evidence of Burmese Extremist Buddhist monk with some Sri Lankan BBS groups. Some others argued that Israel is behind this violence against Muslims in Sri Lanka. It may be true that these factors partially contributed to the growth of anti-Muslim trends in Sri Lanka yet, Victor Ivan reveals that anti-Muslim campaign was initiated and institutionalized by Sri Lankan Defense Secretary:

According to Victor Ivan a well-respected Sri Lankan journalist the creation of BBS is a handiwork of Defense Secretary Goatabhaya Rajapakse. This is very much self-evident from the high level of protection and immunity BBS gets from this government apparatus. This fact has been very vividly illustrated with substantiated evidences by Victor Ivan in his brilliant article. (Please read shadow of Gotabhaya, Sri Lankan Guardian 8/7/14). He explicitly exposes the clandestine crafty pack that exists between Goatabhya and BBS. Victor Ivan describes this secret pack in this way,

“Ven. Gnanasara’s boldness has more to do with the clout of the defense ministry rather than a natural thing. In the face of the Thero’s numerous performances security forces allowed him to act at will as they were all aware of the secretive relationship between the monk and the defense secretary. Even though a large number of government ministers and parliamentarians did not approve of the violent role the Thero was playing, all of them adhered to a hushed policy because of Gotabhaya’s shadow that prevailed upon him. Prominent Buddhist monks who did not endorse Ven. Gnanasara’s act kept silence as the connection between him and the defense secretary was no secret to them “ Victor Ivan. Sri Lankan guardian: 8-7-2014). It can be said the BBS is a creation of Goratabhya and although he tired distance himself after Aluthgama incident; it is an open secret that for the last two years BBS has been dancing to the tunes of Goarabhaya and has been acting above the rules of law with full immunity because of this backing from the Defense Secretary. This is very much echoed in a recent

Justice Minister Rauff Hakeem has been telling the international community that Muslims in Sri Lanka face existential threat from racist BBS. He told this many times in local and international meetings. This message was already conveyed to many international organizations. Muslims have been told that Muslims should not internationalize the problems their problems as Tamils did. Recently foreign Minister openly requested Muslims not do this and yet, Muslims seem to have no other options but to seek help and support of international community. Justice Minister Rauff Hakeem told the US Ambassador Michele Sison that BBS is planning a ‘Virtual holocaust’ against the country’s Muslim community unless Islam phobia and hate speech by radical monks were nipped in the bud” ( Navamani Newspaper 18/7/2-14). He further told foreign correspondents that there was a ‘bigger project’ at work to cripple the Sri Lankan Muslim community economically”. This is very much clear from recent attacks on Muslim shops and properties.

The situation is very much volatile and precarious. He described the situation like a time bomb waiting to explode. “The way things are going it is a time bomb, and we have a duty by the nation to arrest the situation,” For the last two years Muslims have been facing these challenges and yet, this government intentionally ignored the plight of Muslims and continues to allow BBS to operate against Muslims. It is not a secret that this government is behind all these activities against Muslims. BBS and its cohorts would not be able operate freely without government endorsement and support. It is reported that Goatabhaya gives financial, legal and material support to BBS to operate freely. BBS has been functioning with the favoritism and immunity they get from the top in this government.

Victor Ivan tells that BBS gets such immunity because Police and Judges cannot do their jobs independently because of fear from Defenses Secretary. Many occasions Goatabhaya interfered and perverted course of justice when judges wanted to take some legal action against BBS. It is very much clear that there is no political will at the top in this government to sort this problem out and rather some elements at top encourage BBS to grow in expectation that they would be able to reap some political gains. The Minister of justice further observed that “Law and order and law enforcement cannot work if there is no political will. The guardians of the law cannot permit a cultural impunity to grow,” This is an utter failure of legal system in Sri Lanka. This is a clear manifestation of discrimination and partiality in application of law: This could a dreadful epoch in the legal system of Sri Lanka. If this trend continues Sri Lankan justice system would descend into chaotic situation.

It is abundantly clear that BBS is doing all these dirty works with the support of some top people in this government. It is pointless to come with some conspiracy theories about this issue. The fact of matter is that this anti-Muslim campaign is initiated and institutionalized by Goatabhaya. You do not need to be a political expert to know this truth and this is very much self-evident from all what we have already noted. Muslim politicians and Muslim community should think positively and constructively to face this anti-Muslim monster. It is reported that Goatabhaya has got USA citizenship. It is with this dual citizenship he is engaged in these racist activities against all international norms and rules of law. USA government should deprive him of his USA citizenship for his apparent involvement in this racist campaign. It is duty of all peace loving people of Sri Lanka to expose the atrocities of Goatabhaya through all media networks. Gnanasara Thero would not have courage and finance to do all these without Goatahaya. This is a true fact and this is not a myth. Let us tell this truth to the world loudly and very much clearly.