BBS fires all cylinders at Muslims in Sri Lanka 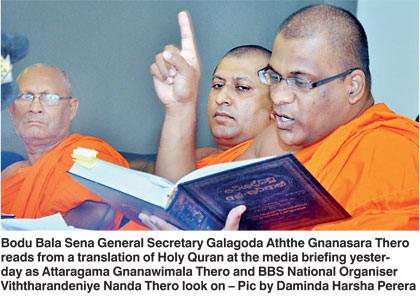 By Dharisha Bastians
Firing from all cylinders, the Bodu Bala Sena yesterday hit back against Monday’s much-welcomed and harmonious compromise on the Halal controversy and its architects, with the monk-led group claiming it would not rest until the Islamic certification is completely banned.

The hard-line group which started the anti-Halal agitation through the country said the logo was merely the final stamp of a process that was abhorrent to the Sinhalese Buddhist majority in the island. The group said the Halal debate must continue and Sinhalese must continue to boycott Halal products.

The group slammed Presidential Advisor Milinda Moragoda and the trade chambers for brokering the compromise with the All Ceylon Jamaiythul Ulama, making it non-compulsory for companies to display the Halal logo on packaging. Calling Moragoda politically bankrupt and an agent of foreign influence in Sri Lanka, Bodu Bala Sena monks said the former Minister was engaged in a conspiracy to destroy Buddhism in Sri Lanka.

Addressing the press briefing, Bodu Bala Sena General Secretary Galagoda Aththe Gnanasara Thero said they were disgusted that much-loved learned monks were joining hands with the ACJU to announce the Halal compromise. He charged that the Halal compromise had come with no warning to the Mahanayake Theros in the country.

“Those pseudo Buddhist leaders who never stood against Muslim extremism and Christian fundamentalism when it was taking root in this country five to six years ago are now suddenly claiming this is a historic occasion,” Gnanasara Thero said, referring to the monks present at the ACJU joint press briefing on Monday.
Hitting out at the business community, the Bodu Bala Sena General Secretary said the community was used to making money using shrewdness and cunning. “The trade chambers used these same tactics to manufacture this compromise on Monday,” he charged.

Taking a swipe at Ceylon Chamber of Commerce Chairman Susantha Ratnayake, the monk said that it was at the hotels of the Ceylon Chamber Chief that a Buddha Bar had been opened and an item called ‘nirvana’ was placed on a restaurant menu.

Bodu Bala Sena Executive Committee Member and layman Dilantha Vithanage charged that if the trade chambers failed to safeguard the interests of the Sinhala Buddhists, the group would take steps to set up a Buddhist trade chamber.

Vithanage said that it was unthinkable that the trade chambers, the ACJU and members of the clergy had reached consensus on such an important issue within two days.

“This is an insult to the Presidential Cabinet sub-committee that is yet to present its report on the Halal issue. The ACJU is making national decisions ignoring the Presidential committee,” he said.

He said the organisation of Muslim clerics had no business to make major announcements ahead of the report being submitted by the sub-committee. According to the group, several businessmen had complained to the committee about being coerced into obtaining the Halal certification.

Criticising the ACJU decision to provide Halal certification free of charge from now on, Vithanage said that only indicated that what they were doing in the past was robbery. “They must return all the money they made from certifying Halal, which is against their own religious teachings,” he said.

Vithanage said the monks who had joined the ACJU to announce the compromise yesterday had insulted the Mahanayake Theros who had only learned of the decision through media reports.

The Bodu Bala Sena said that they would continue their campaign of agitation and ensure Halal certification is completely done away with by the April New Year. The Group’s General Secretary said there was no point putting plasters on the problem.

The group said that the debate they had created about creeping Muslim extremism had already resulted in sales dropping by 50% in Muslim owned enterprises.

We are opposed to the niqab: BBS
Signalling that its next campaign of agitation would be against the Muslim headdress and the garment that covers the entire body known as the niqab or burqua, the Bodu Bala Sena said the costume was a signal that Sharia law was being enforced in the country.
Bodu Bala Sena Executive Committee Member Dilantha Vithanage said that in a country that did not permit tinted windows in cars because it hindered identification, it was unthinkable that women were permitted to wear a garment that only revealed their eyes.
The group’s General Secretary Galagoda Aththe Gnanasara Thero said that the garment was causing all kinds of social problems in the country.
“A Police officer cannot identify who this person is under that garment, whether they are male or female. A woman Police officer always has to be present to check,” he said.