[BBS head with his body gaurds]

By Jenny Gao
This Thursday, Tudor Silva, Senior Professor of Sociology from the University of Peradeniya, gave a talk about Bodu Bala Sena (BBS), an organization of militant Buddhist monks, in Sri Lanka.

With a Buddhist revival during the 20th century, Sri Lanka saw a rise of Sinhalese Buddhist nationalism as a political force in 1956. BBS was born May of 2012 in the aftermath of the military victory of Government of Sri Lanka (GOSL) over the Liberation Tigers of Tamil Eelam (LTTE). The BBS is registered as a non-profit and lead by Buddhist monks who broke away from Jathika Hela Urumaya (JHU), another political party headed by Buddhist monks.

As a post-war political organization, Professor Silva says that the BBS has been a “major obstacle” to peace in Sri Lanka. As Buddhists constitute a great majority of the Sri Lankan population, the BBS pushes for internal purification and the safeguarding of Buddhism against external threats and enemies.

Though the BBS is not an armed group, they incite violence through indirect means like “[manipulating] religious symbols.” Professor Silva referenced the Althugama riot incident, in which violence broke out between the Buddhist and Muslim population in Aluthugama, a coastal town in western Sri Lanka, the BBS manipulated the image of a monk’s robe by making the robe into a symbol that Muslims cannot touch. If any Muslim laid hands on the robe of a monk, even if in self-defense, the Buddhists had good reason to attack Muslims. This caused three days of riots, in which BBS members and other Buddhists raided many Muslim shops and homes. There was “no action taken against BBS for inciting violence.”

The BBS views its own political role as not for the purpose of consolidating power, but rather for the higher objective of preserving and promoting Buddhism. Seeing the Muslim as Christian population as a threat to this Buddhist state, the BBS has Anti-Muslim and Anti-Christian campaigns and propaganda. Seeing them as a cultural threat, the BBS has boycotted Muslim shops and campaigned against the hijab. “They take the law into their own hands,” says Professor Silva, and conduct raids as moral police at places like Evangelical churches. 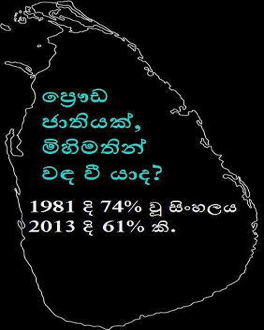 This concern for the dilution of Buddhism in the Sri Lankan demographics is shown in this propaganda poster (left), which says, “Will a proud nation disappear from earth? In 1971 Sinhalese were 74% of the population. In 2013 reduced to 61%.” Professor Silva says this “is not factual” and that the BBS “articulates existential insecurities” of the Buddhist majority to identify the religious and ethnic minorities as the cause of their problems.

Some speculate that the government indirectly supports, or even sponsors the BBS. Even still, the relationship between BBS and the government is not entirely harmonious. The BBS has “made life difficult for Muslim politicians in the government”. On the other hand, Professor Silva says some politicians has criticized the BBS to be an “externally sponsored trouble maker”. He believes that the “government is cornered” between protecting relations with Muslim states and appeasing the Buddhist majority when it comes to dealing with the BBS.

Professor Silva warns us not to “identify BBS merely as a Buddhist fringe” movement. Their public meetings are well attended. Not only just nuns and monks, but also citizens of all ages. The BBS uses Facebook, blogs, and other forms of social media to disseminate their ideas and attract young people.

Professor Silva suggests that the BBS’ activities can trigger a reactionary version of Islamic extremism. Because of the various ways the BBS directly and indirectly influences the Buddhist population and its particular relationship with the Sri Lankan government, it will be interesting to see how the Muslim and Christian communities react to BBS’s actions in the future.