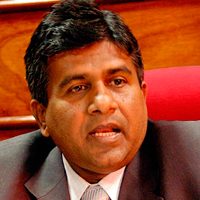 He has also said that this driver searched the area and found three empty cartridges later in the morning.

Police are investigating the complaint.

However, police spokesman SSP Prishantha Jayakody said there had only been a lighting of firecrackers at the home of a neighbour of Mr. Rajapaksa.

No damage or injury has been caused, he said.
SLM

Wijedasa Rajapaksa too is warned

A shooting has taken place opposite the residence of Parliamentarian Wijedasa Rajapaksa say reports. The Parliamentarian has told media that today (20th) early morning (12.20 a.m.)  he heard three shots being fired and found three fired cartridges.

He said a team of police officers are conducting investigations.

Recently Attorney Gunaratne Wanninayake was threatened near his residence by four armed persons. Mr. Wanninayake is an active member of the Lawyers’ Collective that was in the forefront of the opposition of lawyers for the impeachment process brought against the Chief Justice by the government.

The Mirihana Police are investigating a complaint lodged by BASL President MP Wijeydasa Rajapakshe after two empty cartridges were found in the vicinity of his house early this morning, the Police said

Sources said that the youngest son of the MP had heard gun shots at 12.20 am today and had heard a car driving by thereafter. Subsequently the driver of Mr. Rajapakshe had inspected the vicinity of the house early this morning when the two empty cartridges were found.

The Police are currently recording a statement from Rajapakshe at his residence in Nawala.
DM

A pistol could have been used to fire two 9 mm bullets in the shooting  incident near the residence of Bar Association President  Wijeyadasa Rajapakshe, Police Spokesman said.

The Mirihana Police are conducting investigations but so far no arrest as been made, Police Spokesman SSP Prishantha Jayakody said.

According to the Police Spokesman UNP MP Mr. Rajapakshe, complained to  the Mirihana police that his son had heard the gun shots around 12.30   early morning, subsequently, his driver had found two used cartridge near the house.
ST