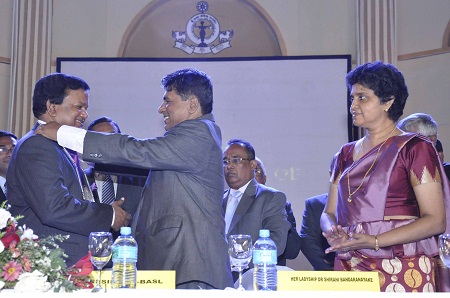 The lawyers and speakers commended the newly elected President of the BASL for acting in line with the aspirations of the legal profession in orgnising the event and not compromising the stand of the Bar. Former President Chandrika Bandaranayaka, several diplomats, leading politicians, former AG Sunil de Silva, hundreds of senior and junior lawyer from all over the country attended the event.

The guest speaker Justice Wigneswaran, respected retired Judge of the Supreme Court, addressed the the audience with the message that the independence of judiciary cannot be protected without strong judges and the Bar. He said that the judges of the higher courts must express their fearlessness and give leadership. He further said that they cannot take a u-turn in their stand, disappointing the legal profession and the minor judiciary. Mr. Upul Jayasuriya assured the legal profession and the public that the BASL under him would take all measures to establish Rule of Law and protect independence of judiciary. He also reiterated the importance of partnering with civil society organisation and national/international partners.

Making a defiant stand against the appointment of Mohan Peiris as Chief Justice (CJ), the Bar Association’s 39th Annual Convocation was presided-over by the 43rd Chief Justice of the country Dr. Shirani Bandaranayake, who was controversially impeached earlier this year.

Appointed CJ Mohan Peiris was absent from the ceremony and Attorney General Palitha Fernando who was present reportedly left before the convocation began.

In an unprecedented move, the induction was graced by Dr. Bandaranayake who was in essence the Chief Guest at the ceremony which lacked an official Chief Guest.

She entered a packed Navarangahala, where the ceremony held, welcomed by drummers and traditional dancers to a standing ovation.

Thereafter she was the first to light the traditional oil lamp and then took her seat at the head chair on the head table.

Former President of the BASL, Wijeydasa Rajapakshe handed over the traditional mantle to newly elected President Upul Jayasuriya, who was congratulated thereafter by Dr. Bandaranayake.

Jayasuriya then took charge of the proceedings of the evening

“If the de facto Chief Justice continues to act as if his conduct is valid by law and hears applications, constitutes benches and makes determinations so positively and confidently expecting a divisional bench to reverse orders already made, even if they do reverse the orders already made in the future, then the integrity and impartiality of the honorable judges who make such orders would come into question,” Justice Wigneswaran said referring to Court of Appeal and Supreme Court determinations made against the impeachment.

He added that the task ahead for the legal professional was a difficult one.

“Of course character assassinations through the press, threats and intimidations, if not sheer physical violence might be thrown at you by interested parties. But remember you are on a worthwhile journey, the journey to bring respect and legitimacy to law and order to this country, the journey to oust force and coercion from the legal administration of courts, the journey to consolidate our profession,” he said.

President of the BASL Upul Jayasuriya said that Hulftsdorp connotes the symbol of freedom.

“The court premises in Hultfsdorp are the symbols of the people’s freedom. The executive must not be allowed to extend its armed fist and tread there with police boots,” he said while reiterating that he will stand for the independence of the Judiciary.

He further said that the overwhelming mandate he received was due to the recent developments that symbolised the collective stance against such interferences, and vowed to fight for justice, “with deep conviction, independence and impartiality with no compromise“( By Hafeel Farisz)