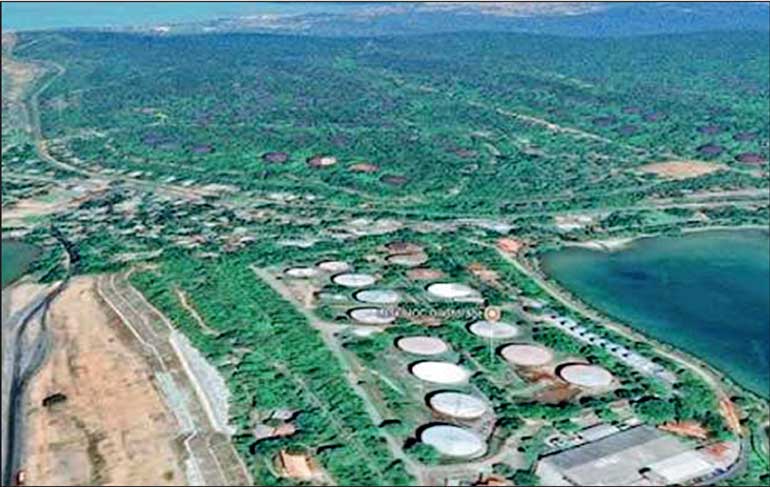 Image: An “early” modernisation project of the Trinco oil farms also on the cards.

The decisions included a four-pillar initiative, comprising lines of credit for food, medicines and fuel purchases granted by India, a currency swap agreement to deal with Sri lanka’s balance of payment issues, an “early” modernisation project of the Trinco oil farms that India has been pursuing for several years, and a Sri Lankan commitment to facilitate Indian investments in various sectors.

“It was agreed that modalities to realise these objectives would be finalised early, within a mutually agreed timeline,” said a Sri Lankan High Commission statement issued at the end of the visit by Mr. Rajapaksa, who met External Affairs Minister S. Jaishankar and Finance Minister Nirmala Sitharaman in an unusual “joint meeting” on Wednesday. It was also attended by Sri Lanka’s High Commissioner to India Milinda Moragoda and Finance Secretary S.R. Attygalle.

Mr. Jaishankar will meet Sri Lankan President Gotabaya Rajapaksa on Saturday in Abu Dhabi when they will inaugurate the Indian Ocean Region Conference organised by the India Foundation.

“Ministers Sitharaman and Jaishankar agreed to open direct lines of communication and to be in direct and regular contact with each other to coordinate the initiative,” the statement said. Mr. Rajapaksa, brother of President Gotabaya and Prime Minister Mahinda, also met National Security Adviser Ajit Doval on Thursday. According to a statement by the Sri Lankan Finance Minister’s office, they discussed a “range of issues pertaining to mutual strategic interests”.

However, the MEA and the Finance Ministry did not issue any statements on the outcome of the meetings in Delhi.

India and Sri Lanka have had a number of differences on economic issues in the past two years, particularly over the perception that the Rajapaksa Government has favoured Chinese companies on projects that it expedites. In particular, the projects to develop oil infrastructure in Trincomalee have been hanging fire since 2017, when former PM Ranil Wickremsinghe signed an MoU on projects in Delhi.

President Gotabaya Rajapaksa’s request for a $1 billion swap, made directly to PM Modi during a telephone conversation in May 2020, has not yet materialised, and the Sri Lankan statement appears to indicate there will now be a swap from the RBI.

India has also delayed a decision on a request PM Mahinda made directly to PM Narendra Modi during a meeting in February 2020 for a debt moratorium waiver to help Sri Lanka tide over its economic problems that have been exacerbated by the pandemic.

Matters came to a head this year after President Gotabaya cancelled an MoU signed with India and Japan for the East Coast Terminal project. India protested the cancellation though it later agreed to the West Coast Terminal being developed by the Adani group.

With the East Container Terminal project falling through, and no other key infrastructure project taking off, New Delhi is keenly watching Colombo’s moves and pace in regard to the Trincomalee oil tanks, diplomatic sources said.