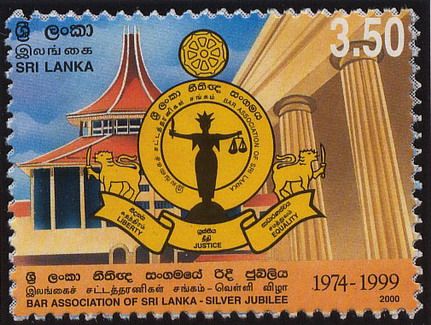 by Mike Andree
As expected, the Bar Association made a fortuitous turn for the better and to the relief of those who sincerely believe that the real freedom of the people lies not in their political leaders, but in an independent un-politicized judiciary.
It was not very long ago that the members of the public signed and submitted, to the Speaker, an impeachment motion, requesting the parliament to remove the then Chief Justice. One of the main protagonists of this historic motion was a prominent journalist.

The impeachment was drafted and prepared by lawyers, who had posed serious questions about the integrity and the independence of the Chief Justice. They believed that the incumbent UNP government, with its 100 members in parliament signing the motion, it would gain a safe and a quick passage through parliament.

But, the impeachment motion was shelved by the very people who championed the cause of an independent judiciary, when in opposition, but when in power it is they who earnestly wanted a surrogate and subservient judiciary.

In the Mannar incident, the Bar Association stood firm. The Executive Committee, barring two members, who were the lawyers of the government and did not attend the emergency meeting of the Committee, decided quite correctly to support an application charging Minister Bathiudeen with contempt of Court. If that decision was implemented and the Bar Association went to Court, it would have been an ominous signal which portended doom for those who contrived to subjugate the judiciary.

As this columnist pointed out, it was a rare case of valor and resolve to stand up against the naked tribalism, exhibited by the political authority, which attempted to give it a communal twist in order to soft pedal an issue, which was the most serious attempt to subvert the Judiciary and obtain or change an order according to the whims and fancies of the political mafia in control in every sphere of life.

It was at this time that this hydra was beheaded by a young Magistrate, who was trained not to yield his power or the Scales of Justice to any one but the law of the land.

After taking the bold and noble steps to be the petitioner in the contempt case, the President and the secretary, of the management committee, wilted. They back tracked from the resolution, which was given to the media, that BASL was taking steps to initiate contempt proceedings against the wrongdoers, including the Minister, to vindicate the honour, dignity and respect of the holders of judicial office and the judicial system.

The lawyers were contacted, the instructing attorney was nominated and the former President of the Bar Association, a leading President’s Counsel and a host of other President’s Counsel, including another former President of the Bar Ikram Mohammed, agreed to appear in the case. The papers were ready and the signatures of all important witnesses, including the Secretary of the Judicial Services Commission, were obtained. By this time, telephone calls from very powerful persons were given to all those who matter. To the surprise of everyone, the two main office bearers refused to sign the proxy and other papers. As all lawyers do, they found a lame constitutional excuse and rested on the provision of the constitution that any decision of the Executive Committee ought to be finally approved by the Bar Council.

It has been the practice of the legal fraternity to find perfectly or ostensible legal objections, framed by themselves, to delay the conclusion of any matter. The laws delays are a perfect example of this methodology adopted by the black coated gentry.

Albeit, there is ample precedence that when an emergency situation arises the President, in consultation with the Secretary, could act in the best interest of the Association and its members and then obtain covering approval, first from the Executive Committee and then from the Council. There has been no precedence where the Bar Council or the Executive Committee had disapproved of any such decision. After all, both, President and Secretary, are elected from the entire membership.

When Eardley Perera PC was brutally assaulted by the Moratuwa Police, within a matter of minutes the then President of the Bar, Dr. H. W. Jayewardene QC, walked into the police station and immediate action was taken to interdict the police officers. If he had waited to summon a meeting of the Executive Committee, a great and illustrious Counsel such as Eardley Perera would have been killed by the police.

Of the present members of the Executive Committee, leaving the Secretary and the President, who are rather new to the working of the Bar Association, the same could not be said of Mrs. Anoma Gunatilleke, the fair Deputy President of the Bar Association and members like Neil Dias and Mahinda Lokuge and even non-executive members like Ged Gooneratne would know that there were many instances where the President and Secretary of the Bar had taken steps in the best interest of the members and the judiciary and obtained covering approval.

It was heartening to note that the Bar Association has appeared for the Prosecution before the Mannar Magistrate’s Court. It must be borne in mind that to travel all the way to Mannar is indeed not a joy ride. A senior lawyer appearing for the absent Minister raised the now famous objection Locus Standi to the appearance of the members of the Bar for the Magistrate.

The police filed a report admitting that the call had been given from the telephone of the Minister, but averred that it had been made by the brother of the Minister, Riyaz Bathiudheen and therefore the Minister stood exonerated of the allegations. It was then pointed out by the lawyers, who appeared for the Bar, that the Magistrate, who was the virtual complainant, was present in Court and had absolutely no doubt who the caller was.

Thereafter, the Magistrate under the provisions of the Criminal Procedure Code, decided to summon the Minster to appear in Court.

This was indeed a moral victory, first for the masses, then for the judiciary and the Bar Association.

When the management committee decided to appear for the prosecution, it was the correct decision taken under the leadership of Wijedasa Rajapakshe, though the approval of the Executive Committee or the Bar Council was not obtained. The Bar has upheld the traditional position that it would do everything within its power to protect the Judiciary before whom they appear day in day out. The Bar is unmistakably the voice of judiciary.

The Mannar Bar has taken this confrontation to a new level. Its members have refused to appear in Court until the culprits, who were responsible for the stoning incident, are apprehended. One is the principal of a government school and others are a member of the elected body and a close relative of the Minister. They roam about freely, without any fear of arrest. Others shown on TV could be easily identified.

The IGP, who sermonizes about discipline ought to explain why the police have not arrested them.