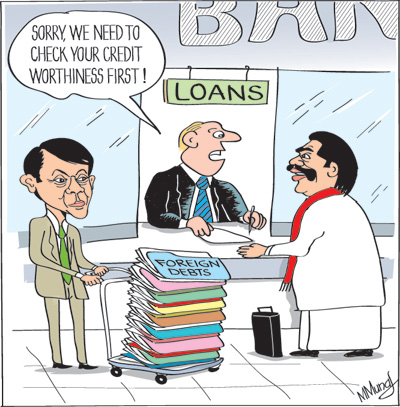 Taking the balance sheet of the Finance Ministry as an example, Wijesinghe said data presentation has been manipulated to avoid presenting the total amount under ‘Consolidated Fund – Accumulated Deficit’.

“Although there is a line in the balance sheet called ‘Investment on Borrowings’ they have already accepted in writing that there is no such account. It is a dummy account,” he said.

Auditor General has given a qualified opinion on Finance Ministry final accounts from years 2013 to 2016. To bypass the regulation in Fiscal Management (Responsibility) Act imposing a ceiling on national debt to be 80% of GDP, officials in the previous government kept loans out of the balance sheet of the Finance Ministry, and instead instructed different institutions to obtain loans individually.

The practice has led to lack of records and proper monitoring of loans taken, said Wijesinghe adding that Government is not able to assess exactly how much debt Sri Lanka is in at the present.

“It is such a mess that, if we start to clear the mess now, maybe in about ten years we will be able to get a proper idea,” he said.

“Some loans we don’t even know if they have been paid in full or not, as we have been paying instalments and interest but proper records have been kept.

To date the Auditor General’s Department has identified loans amounting to Rs. 826 billion which have been taken off the balance sheet in the Finance Ministry balance sheet, when the total loans payable as per 2016 was at Rs. 8861 billion. This includes the Rs. 116 billion loan taken to finance Mattala Airport construction, three loans taken to finance construction of Hambantota phase I, II and extra work amounting to Rs. 142 billion and Norochcholai power plant phase I and II Rs. 166 billion.

“This is all we can say now, there are loans totalling to trillions, which we will uncover as we go on. The main one is the bond. The Finance Ministry does not record the face value of the bond issued, but when it matures we have to pay the amount. But this is not in our records now, and it is difficult to rectify this immediately,” he said.

The gravity of Sri Lanka’s indebtedness is heightened as the asset base has not grown in-line with the increase in national debt over the years. According to Central Bank figures, loans payable as at 2017.11.30 are Rs. 10 trillion while Finance Ministry records a total national debt of 8.860 trillion as at 2016.12.31. But the assets base has only grown to 1.1 trillion, according to Finance Ministry balance sheet as at 2016.12.31.

Wijesinghe also highlighted that the investments recorded each year has been lower than the loans taken the same year. The investments have included social welfare expenditure awarded to government institutions and provincial authorities, which according to him are recurrent expenditure items. This increase is reflected in the increase in per capita debt to Rs. 417,913 in 2016 from Rs. 124,711 in 2006, he said.
FT
ECONOMYNEXT – Sri Lanka’s has systematically window dressed fiscal data hiding borrowings to understate national debt and the budget deficits over a decade in a bid to circumvent a fiscal responsibility law, Auditor General Gamini Wijesinghe said.

“Because borrowing exceeded ceiling set by law, to hide them they had been taken off the books and transferred to different places,” Wijesinghe told reporters Wednesday.

“Even I cannot give you a correct number for the national debt.”

He said a Fiscal Management Responsibility Law set up in 2003 had set limits for national debt and deficits and over the last decade through various methods devised during the time of then Treasury Secretary.

According to central bank provisional data, the national debt was 10,339 billion rupees by end November 2017 he said.

In the past loans for state enterprises were ‘on-lent’ when borrowed directly by the government.

In addition there were over billion rupees of borrowings by the Road Development Authority from local banks under Treasury guarantees, he said.

The RDA has no revenue to speak of to settle any loan. These were classified as contingent liabilities.

The Treasury is now making annual allocations to repay these liabilities he said. They continued to be classified as ‘contingent liabilities’.

A total of 536 billion rupees had been borrowed via Treasury guarantees or letters of credit.

The Department of Pensions also appeared to have borrowed over 35 billion rupees from the Bank of Ceylon and Hatton National Bank to pay ‘commuted pensions’, over several years, Wijesinghe said.

These expenses do not appear to be counted as recurrent expenditure in the budget of relevant years, he said, understanding expenses and the budget deficit.

Analysts have also pointed out that loans to RDA, unlike to agencies like the Ceylon Electricity Board which can make profits, were not contingent liabilities, but actual liabilities of the central government which could never be repaid by the road agency out of its own revenues.

The loans are still classified as ‘contingent liabilities’ even when the Treasury has started to pay them back.

Many of these practices are still continuing with officials unable to decide where to start corrections. He said there was a 487 billion rupee gap between the face value and recognized value of bonds.

There was a massive gap between total liabilities and recorded assets.

But from 2013 a balancing figure labelled ‘investment on borrowings’ which was exactly the same as borrowings had been introduced to push up total assets, Wijesinghe said.

“The balance sheet had been window dressed,” he said. In 2016 Wijesinghe disclaimed the finance ministry accounts.

Under the current administration about 1.6 billion in assets had been identified, he said.

Analysts say the problem could be solved either by introducing an unallocated asset account for unidentified assets, which will be periodically debited and credited to a non-financial asset account or by admitting the existence of negative net assets.

The current administration has identified about 1.6 trillion in assets, Wijesinghe said.

Wijesinghe said the ‘grace periods’ of a number of large loans were now starting to end, and instalments will kick in over the next three years, pushing up debt service.