Attacks on Judiciary are attacks on people – Friday Forum statement 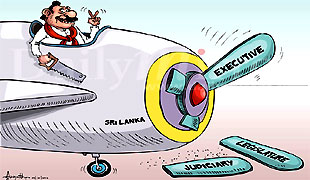 The independence of the judiciary in Sri Lanka has seen consistent erosion for decades. The unprecedented public statement by the Judicial Service Commission of Sri Lanka (JSC) complaining of intrusions into its functioning is yet another example of the incremental assault on democracy and judicial independence in this country. The public protests against a recent attack by a mob on a court house and a member of the judiciary in Mannar, allegedly instigated by a Cabinet Minister, appears to have had no impact on governance which continues to display contempt for the Rule of Law.

The Judicial Service Commission (JSC) is created by the Constitution and is composed of the Chief Justice and two other Judges of the Supreme Court. Its function is basically the appointment, transfer and disciplinary control of what is commonly referred to as the “minor judiciary”, consisting of District Judges, Magistrates and other judicial officers. Its independence is protected by the Constitution, which makes it an offence to influence the decisions of the JSC otherwise than in the course of duty. The independence of the JSC is thus an integral part of the independence of the judiciary. Giving a testimonial to an applicant for a judicial appointment is expressly permitted, otherwise this would be an offence.

We are informed by the JSC that its members (i.e. the Chief Justice and the other two Supreme Court Judges) were summoned to a meeting by an unnamed political authority. We are greatly encouraged that on this occasion that move was strongly resisted by the JSC.

The Friday Forum unequivocally condemns any attempt at violating the independence and authority of the judiciary. We urge all sections of Sri Lankan society to respond to this threat by reaffirming our commitment to preserve our democratic rights. It is only an alert and active citizenry that can prevent this type of abuse of power.

In a democracy principles such as independence of the judiciary are not purely theoretical propositions. Attacks on judicial independence are attacks on the people. Article 4 of our Constitution recognises that the judiciary exercises the judicial power of the people. The judicial power of the people has to be exercised both independent of the political authorities and also without partiality. Otherwise we, as citizens, are left without equal protection of the law, particularly against violations of our democratic freedoms and rights by political authorities. We need to do all we can to safeguard judicial authority and independence.

We emphasise the professional responsibility of the Bench and the Bar to actively protect the integrity of the judiciary. We are impelled to point out that this state of affairs did not come about suddenly and in isolation. Actions and omissions of both the Bench and the Bar were strong contributory factors to precipitating the current erosion of democratic values and assaults on judicial independence.

Silence of BASL on 18th A

We recall with deep regret the stunning silence of the Bar and the Bench in the face of judicial appointments made by the Executive in violation of the Seventeenth Amendment. The Bar Association was duty bound to protest and take necessary action including enlightening the public on the unconstitutional nature of such appointments and the negative implications for the Rule of Law and judicial independence. It is doubtful that the legal establishments in our neighbouring countries in South Asia would have tolerated such a situation. Similarly, attempts at compromising judicial integrity through political appointments and other benefits granted to immediate family members of judges should have been strongly resisted through public debate and demands for accountability on the part of both the political authorities and the recipients. When a retired Chief Justice was appointed as a presidential advisor and other retired justices were given diplomatic appointments such moves too should have been forthrightly resisted as such political appointments clearly compromise the integrity of the judiciary. The weak response of the Bar when the Eighteenth Amendment Bill was rushed through Parliament as an “Urgent” Bill was a blow to democratic governance and the rights of the people of this country. Furthermore, controversial judgments impacting on our constitutional rights do not receive the critical discussion and review in the media by either the Bar or by academics that the public benefit requires.

Casting aspersions on officials of the JSC through the media is totally unacceptable. There can be no defence for interfering with judicial independence by either the Executive or the Legislature. Both these organs of State are bound by the Constitution and by well-established constitutional conventions to ensure judicial independence. The government must also be mindful of Sri Lanka’s obligations under international law. That these events are taking place just a few months from the second cycle of the Universal Periodic Review of Sri Lanka by the UN Human Rights Council is also significant. It sends a signal to the international community that Sri Lanka does not take its international human rights obligations seriously.

While the Bar has done right by responding strongly to this latest intrusion on judicial independence, we stress that consistent action is required in the future to send a strong and unequivocal message to the political authorities. We wish to remind legal academics too of the role they are expected to play in educating their students, their peers and the wider community. We remind our fellow members of the public that eternal vigilance is the price of freedom from tyranny.

An appalling physical assault on former District Judge Mr Manjula Tillakaratne, Secretary of the JSC, has taken place even as this statement was being completed. This shockingly illustrates the gravity of the situation. It also underlines the concern we have voiced at the public casting of aspersions on this officer, whose independence of function is provided for in our Constitution.

The Friday Forum is a group of citizens committed to the advancement of democracy, social justice and pluralism in Sri Lanka. The Forum has regularly issued public statements on issues of common concern in the spirit of democratic engagement with a view to stimulating public debate and encouraging action from state authorities and other relevant parties.

On behalf of Friday Forum, the Group of Concerned Citizens