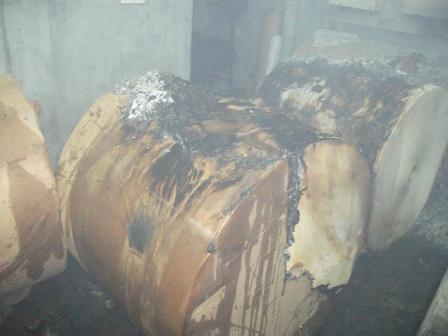 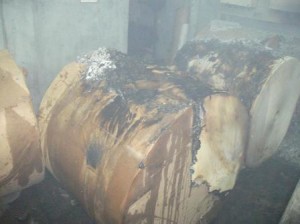 Sri Lanka’s main Tamil party accused the government yesterday of attacking the biggest opposition newspaper in an attempt to silence its political rivals ahead of key local council elections.
The Tamil National Alliance (TNA), which represents minority ethnic Tamils, said Saturday’s torching of the Uthayan newspaper presses added to a “fear psychosis” among the population in the northern district of Jaffna
.
“One of the main objectives (of the attack) is silencing the opposition ahead of provincial council elections,” TNA legislator Suresh Premachandran said.

“There is a fear psychosis in Jaffna, people are living in fear. They are scared to come out for political meetings. They fear there could be violence,” Premachandran said.

Three gunmen staged Saturday’s pre-dawn arson assault on Uthayan’s office and printing press in Jaffna, the capital of Sri Lanka’s former civil war zone in the north of the country.

Tamils have pressed for provincial elections to be called in the island’s Tamil-dominated north, where the first ever such vote is scheduled to take place in September.

Local media reports quoted the defense ministry’s publicity arm claiming that the attack was an “inside job” to discredit the government as the United States expressed concern for media freedom and urged a credible investigation.

The military in a separate statement issued Saturday denied any involvement in the attack.

Police said a senior officer was heading an investigation into the assault, which came on the eve of the traditional Sinhala and Tamil New Year. No arrests have been made so far.

Uthayan’s owner, Eswarapatham Saravanapavan, who is also a TNA MP, said it was the second strike on the publication this month. Five of his employees have been killed in recent years, but no suspects have been prosecuted, he said.

Sri Lanka lifted emergency rule two years ago after the army crushed Tamil separatists in 2009 following a decades-long civil war, but media rights groups say journalists are forced to self-censor their work due to fear of reprisals.

Some 17 journalists and media employees have been killed in the country in the past decade and no-one has been brought to justice.