Attack on freelance journo: Attackers vow to return after polls and wipe out family 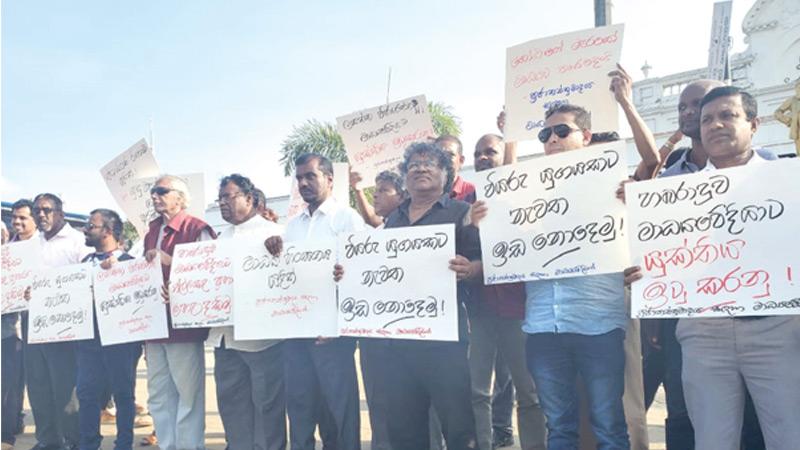 Image: A protest against the attack on Lasantha Wijeratne.

Freelance journalist Lasantha Wijeratne became the recent addition to the long list of Sri Lankan journalists who has faced intimidation and threats in the line of duty. Just three days prior to the country heading to yet another decisive Presidential poll, Wijeratne was attacked on Thursday by a group of unidentified armed men who had stormed into his house in Habaraduwa during the wee hours of the morning. A terrorised Wijeratne had been slashed with a sharp weapon by the masked men, threatened and beaten. He now lies at the Karapitiya Teaching Hospital, recovering from the severe injuries caused. 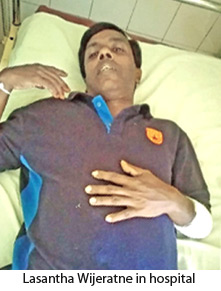 Days before Wijeratne, had released a book titled ‘Wasteful Development and Corruption’ which allegedly criticized a front runner of the Presidential race. He had presented a copy of the book to another Presidential hopeful. Wijeratne’s wife, Madhusha Priyangika believes this could have led to the attack on her husband. The attackers had mentioned his book during the attack. “They threatened to wipe out our whole family,” she told the media. The armed men had vowed to return despite the election results, she said.

While attacks on journalists have been almost unheard of since 2015, media personnel and activists gathered before the For Railway Station to protest and voice their dissent against the attack on Wijeratne. Even as the country entered the cooling period of the pre-election phase the group gathered in Colombo to oppose what they called was a re-entry into a fanatical era in the country.

“When we asked Lasantha, what he clearly said was the book he had written about various frauds and corruption which he presented to Premadasa on November 6 was the cause of his assault” Civil society activist Saman Rathanpriya said. “However, we have not identified who committed this act” he added. According to Rathanpriya no matter who committed it this act should be condemned.

“More importantly this is a death blow to media freedom in the country” he said. Rathanpriya told media that they believe a journalist must have the freedom to write what they want. “No one has the right to beat, stab, kill or abduct a journalist for doing so” he stressed. Noting that journalists of this country have experienced this in the past he questioned if the country is once again returning to that dark era.

The Free Media Movement (FMM) also called for prompt investigations into the attack. Issuing a statement the FMM said the attack which was carried out days before a Presidential election is a grave violation of democracy. They also urged for the details relating to the investigations to be revealed and called for those responsible to be bought before justice.

While on Friday the Habaraduwa Police commenced investigations into the incident, however the country’s law enforcement is yet to arrest any suspects in connection to Wijratne’s assault.