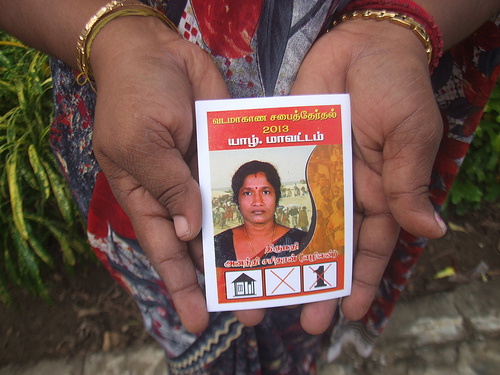 D.B.S.Jeyaraj
The residence of Ms. Ananthi Sasitharan who is contesting the forthcoming Northern provincial council elections on the Tamil National Alliance list under the house symbol was attacked shortly after midnight on Friday September 20th 2013.

Ms. Ananthi Sasitharan is the wife of senior Liberation Tigers of Tamil Eelam(LTTE) political leader Sinnathurai Sasitharan alias Ezhizhan who reportedly”disappeared” after surrendering to the Armed forces at Mullaitheevu in May 2008.

Ananthi contesting as “No 1”on the TNA list has projected hersef as a candidate seeking truth and justice for the families of persons who have gone missing or have disappeared during and after the war.
The attack on Ananthi’s residence in Chulipuram in the Jaffna peninsula occurred during the night around 12.40 am. A group of youths working for the United Peoples Freedom Alliance(UPFA) had allegedly attempted to paste posters on the walls of Ananthi’s house earlier and had been chased away by volunteers working for Ms. Sasitharan. They had then returned with some military personnel and launched an attack.The assailants had guns,poles,swords and knives.
According to what Ms. Ananthi Sasitharan told the media, the group comprising cadres of the Eelam Peoples Democratic Party(EPDP) and security forces had entered the premises forcibly and assaulted volunteers, supporters and party workers in her residence which was also being used as a campaign office.Over a dozen had been injured of whom eight had sustained serius injuries of whom eight she stated.Vehicles were smashed and tyres slashed.
The invaders had also smashed the windows and doors of the house and also uprooted plants. Some stones were also thrown. The gang had entered the house and damaged furniture and also snatched cellular phones from those assembled in the residence.
A lawyer attached to the PAFFEREL organization monitoring elections who went to the scene had also been attacked.
According to Ananthi , the gang was may have caused much more harm and damage but had to cut short their attack and flee because people in the neighbourhood had started rushing to the spot after hearing the commotion.
She said that Police emergency at 119 had been called but had not turned up for a long time. Thereafter she had contacted TNA parliamentarians “Mavai”Senathirajah and MA Sumanthiran who had contacted higher Police authorities. Thereafter Police had arrived at the house.
TNA national list MP and lawyer MA Sumanthiran staying in Jaffna town rushed to Chulipuram.Officials of the Elections Commissiners Dept also went to Chulipuram to see what had happened and record complaints formally.
Ananthi’s three children all of them girls were also in the house at the time of the incident and were terrified.She had earlier relocated them to Mannar for reasons of security. The girls aged 14,12 and 10 who stayed in a Catholic institution in Mannar had returned to Jaffna only on Thursday as the election campaign had wound up on Wednesday.
Ananthi Sasitharan has been the target of several intimidatory acts and protest demonstrations during the election campaign.
She is strongly tipped to garner a huge number of votes from women sympathetic to her plight.
DBS Jeyaraj can be reached at [email protected]