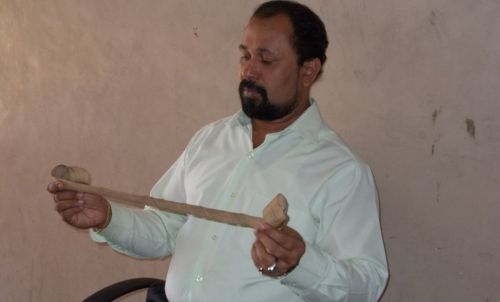 Image: Vijitha Rohana Wijemuni, a former Sri Lankan naval rating who shot into infamy for hitting Indian Prime Minister Rajiv Gandhi with his rifle butt at a Guard of Honor here on July 30, 1987, and who has been predicting the death of President Maithripala Sirisena by January 27 this year.

Astrologer Vijitha Rohana Wijemuni arrested and remanded on charges of making false predictions regarding the fate of President Maithripala Sirisena has been released on bail.

In Mid 2016 he predicted that President Sirisena will die within six months.

The astrologer was released on a cash bail of 10,000 rupees and two sureties of 1 million rupees each  by Colombo Chief Magistrate Lal Bandara Ranasinghe..

He was arrested by  the Criminal Investigations Department, was produced before Court and was granted bail last night.

Court ordered the astrologer Vijitha Rohana Wijemuni to appear before the Criminal Investigations Department on the last Sunday of every month and imposed a ban on overseas travel.

The case will be taken up for hearing once again on the 28th of February.

(with the inputs form News Radio.)