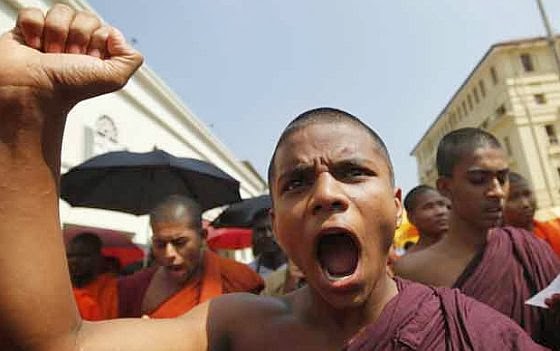 Vishnugupta
“Nothing in the world is more dangerous than sincere ignorance and conscientious stupidity.” ~Martin Luther King Jr. On a widely read website it was reported thus: ‘Saffron terror descended upon the coastal town of Hikkaduwa in Sri Lanka’s Southern Province on Sunday, 12 January 2014!’
‘Mobs led by Buddhist priests launched attacks on two Christian churches while Sunday worship was in progress, demanding that the places of Christian worship should be closed down as they were unauthorized. One was an Assembly of God church and the other the Calvary Free church. The police remained spectators, being either unable or unwilling to prevent or stop the attacks on both churches.’

Maybe for the first time ever, the custodians of the Buddha Sasana that was established by Gautama Buddha to spread his eternal teachings to the four corners of the world are being branded as ‘terror-dealers.’ There is no other interpretation that could be attributed to ‘Saffron terror.’ The facts are accurate; interpretation appropriate and the ensuing shame couldn’t be more ignoble. The shame was brought on this sacred religion whose very foundation was Karuna (Loving Kindness), Mettha (Compassion), Muditha (Sympathetic Joy) and Upeksha (Equanimity) and it was the self-proclaimed custodians who have been primarily responsible for bringing this great religion, its devotees and its legitimate keepers – those faceless messengers of the word of the Buddha, those who meditate and discourse the merits of the Eightfold Noble Path, to the mundane, and lay it to the scorn and insult of the rest of the civilized world.

Doctrine does not live in the saffron robes

Drawing a parallel between the Taliban, an internationally disparaged terrorist organization, and a set of Buddhist monks whose patronage is sought and solicited by some leading political leaders in the country, was unthinkable a couple of decades ago in Sri Lanka. But these Buddhist monks who roam the streets and inside some government departments, have managed to bring the entire Sri Lankan Buddhist population and the clergy into disrepute and ridicule. One will undoubtedly argue that the doctrine does not live in the saffron robe but in the hearts and minds of the devotees.

In one of my earlier columns on the same subject I wrote thus: “From the scriptures of the Vedas and Upanishads, the Thripitaka, Bible, Qur’an, the Books of the Jews, to the enormous structures of marble and granite, all speak for and of the wonder of man and his indomitable spirit. The purest form of the great teachings of the major religions invented by man – Hinduism, Buddhism, Christianity, Judaism and Islam – have been preserved for the ordinary folks to read, and comprehend and practise. Yet the institutions that were built round these noble teachings are acting in total discord with the very teachings of these unmatchable creations of ancient man. The temples and kovils, the churches and mosques, are all being used and abused, not for the propagation of the fundamental teachings of the religion, but for the preservation and perpetuation of the institutions that were built by the ‘Order of the Clergy’ and of members of the clergy themselves.”

In this dishonest exercise of influence by the clergy, the devotees and their well-being are at the bottom of the list of priorities. Self-preservation and self-glorification in the name of the faith are pursued to the hilt, and this maddening chase after glory and mundane comforts doesn’t seem to stop, come what may. What compounds the flagrant abuse of religion by its own ‘teachers’ is when the State gets involved in, and with religion, in its false safeguard. Not only Buddhism but all other religions theoretically should not need protection from outside sources, unless there is perceptible suppression either by the State or other religious sects such as destruction of religious monuments and other artifacts, which are held in the highest of respect and devotion by the followers. Yet in such instances, intervention by members of the suppressed religion would only follow an unforgivable indifference displayed by the State machinery, which is usually held responsible for ensuring the upholding of law and order and specific clauses of the Constitution that contains within itself the Freedom of Worship, and so forth.

Invisible to the naked eye

If, on the other hand, the State itself is engaged in discriminatory practices against one or any number of religions other than the one that is usually held as the ‘State-sponsored religion’ or the ‘majority’s religion,’ it is the burden of the State itself to safeguard the practice of any religion so long as that practice is in no way outside the boundaries of constitutional constraints.

The Hikkaduwa episode epitomizes the intolerance of other faiths on one hand and absolute stupidity and arrogance on the part of the perpetrators on the other hand. In addition, the breakdown of law and order with ordinary laymen and laywomen along with members of the clergy taking the law into their own hands and dispensing ‘justice’ like petty warlords of fringe-communities, would only aggravate a situation that is brewing in our society, a scenario invisible to the naked eye.

That is exactly why one must be extra-vigilant and ‘nosy,’ if possible, to detect the slightest of development of a psychological process that would ultimately lead to an utterly-disagreeable situation as opposed to a ‘normal’ development of socio-religious change. If followers are not equipped to detect and decipher such social developments, it is up to the leaders to inform and educate the followers on more positive lines of intra-community action.

The Bodu Bala Sena and Ravana Balakaya are but an outward expression of an inner hatred and anger that have been burning inside the psyche of a people, and set ablaze by clever charlatans who pretend to be pious men of the robes. Hailing from the sediments of human bestiality, these ruffians in saffron robes are being pampered and held in high esteem by some politicians at the highest level. When such travesty is committed by those who occupy high political office, the henchmen take it for granted that the commission of those charades is perfectly reasonable and even mirthful.

Unlike hundreds of Buddhist devotees who observe sil every Poya day and pray for forgiveness for minor deviations from their daily mundane and puritan lives, those who perpetrate horrendous sins such as desecrating the noble teachings of the ‘Great Teacher’ get more and more enriched at the expense of the honest follower. When these cruel realities dawn on the ordinary followers, it might be too late. Social complacency and cultural apathy are as dangerous as rape and murder when such apathy and complacency are observed by those who can understand and are equipped to take corrective action. Martin Luther King Jr. once remarked: “He who passively accepts evil is as much involved in it as he who helps to perpetrate it. He who accepts evil without protesting against it is really cooperating with it.” Ignoring vice and evil will not sweep them away. Such behaviour is fundamentally cowardly and speaks of spiritual impotency.

When each time these Senas and Balakayas gather to protest and engage in vandalism and show large numbers on television screens, a great majority of Buddhists abhors the activities of these fringe elements who call themselves Buddhist Fundamentalists. A majority of believers of any faith consists of reasonable men and women. They desire peace, not war; they yearn for tranquility, not chaos. But they cannot and should not keep quiet when they see potential harm. Any reasonable person could detect such harm long before it manifests itself in street fights, hate speech and racially-oriented pogroms. But if that average, reasonable man is going to be idle and inactive when confronted with blatantly combative conduct of the fringe elements, the day that the State of Tamil Nadu, in comparison to Sri Lanka, would look like a reasonably moderate State is not too far.
CT