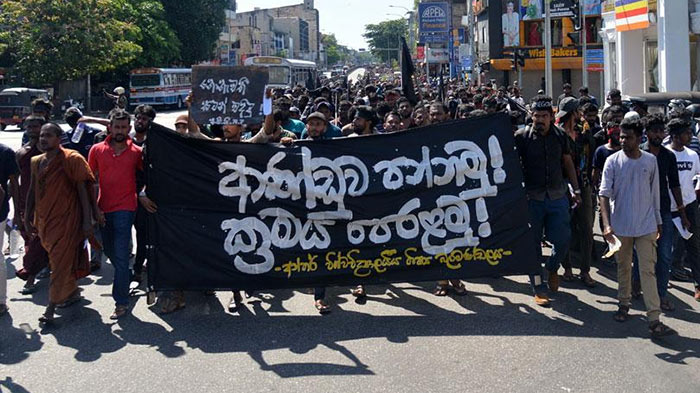 There was serious public opposition to the Podujana Peramuna government lead by President Gotabhaya Rajapaksa. Eventually, President Gotabhaya Rajapaksa had to flee the country and the Podujana Peramuna government, including Prime Minister Mahinda Rajapaksa, who had a two-thirds majority in Parliament, had to resign. This historic popular uprising did not happen by accident and many grave reasons can be identified.

The government failed to control the COVID-19 pandemic that started spreading across the
country from March 2020. No emergency measures were taken and instead, various dubious practices were employed. Ignoring guidelines of the health authorities, using military force and arbitrarily imposing force on the public, not allocating finances at a time when emergency allocations for healthcare was essential, and COVID patients were left to die on the streets.

Shattering the expectations of 6.9 million voters, the role of the government was limited to
media shows only.

At a time when people’s sources of income had been lost due to the COVID pandemic,
agriculture sector was thrown into a deep crisis by introducing an urgent fertilizer policy and it became a far-reaching problem until the impact of a food shortage exacerbating the
sufferings of people already experiencing. The farmers’ struggle against the arbitrary fertilizer ban became the most serious public opposition to a government in recent history.
At a time when schools and universities were closed and education was disrupted, the
Kotelawala National Defence University Act was brought to privatize and militarize education without taking necessary urgent measures. Conspiracies were made in Parliament to pass the Kotelawala National Defence University Act despite the opposition of university students, lecturers, school teachers, trade unions, mass organizations etc. and the people who protested were repressed using the Quarantine Act and the Public Property Act. Five activists of the struggle against the Kotelawala National Defence University Act were illegally imprisoned for five months and sixteen other activists were detained in a military camp under the guise of quarantine.

The historical teachers’ struggle that arose in recent history, demanding the removal of wage disparities that have been in place for a period of 22 years, also started with the suppression of the struggle against the Kotelawala National Defence University Act as the proximate cause. On June 8, 2021, the protest against the Kotelawala National Defence University Act by the students’ movement for free education near the Parliament roundabout was attacked and suppressed by brutal police force, and 32 people including teachers’ union leaders who joined it were arrested. The government did not release the detainees even though they were granted bail by the court and continued to arbitrarily detain them in an army camp in Mullaitivu area. The teachers’ struggle, which was formed as a proximate cause of this repression, expanded its slogans to remove the salary disparities suffered by teachers for years, and eventually it became the largest teacher’s struggle in recent history.

The brutal attack on the peaceful demonstration held in front of the American Embassy in Sri Lanka in support of the struggle of American citizens against the killing of George Floyd is also an important milestone that intensified the people’s displeasure with the government.

Without any reason, the police and anti-riot forces attacked the demonstration and not only
young men, women, small children but also elderly citizens were brutally beaten and arrested.

That attack, which was a good reflection of the anti-democratic autocracy of the Rajapaksa
government, was a strong reason for the formation of serious social opposition around the
government.

The government mercilessly increased the prices of goods while income sources were
destroyed, crops were lost, jobs were lost and people’s lives were being pushed into a serious abyss. Indirect taxes on the people were increased immensely by giving tax concessions to large-scale companies that were earning income. Not only did the prices of goods rise, but the shortage of essential goods also gradually grew. Fuel, gas, kerosene, rice, milk powder queues commenced. Restrictions were imposed on the delivery of goods from shops including Sathosa. Medicines were in short supply in hospitals. Patients, children and pregnant mothers were dying due to lack of essential medicines. Hunger spread across society. Today, out of 58 lakhs families in this country, nine lakhs have fallen into a crisis of not being able to provide food. 38 lakhs families manage hunger by taking only one meal a day.

The Rajapaksa gang and their followers and all the successive rulers who ruled this country
for the past 74 years are responsible for this crisis. They looted public money in billions.
Tsunami relief scam, white cloth ‘Silredi’ scam, MiG Aircraft Deal, Central Bank bond scam,
sugar tax are some of the shameless exploitation of public funds. The people were drowned
in debt by taking loans from countries all over the world and the people inherited only
tragedies like landslides and floods due to the informal development projects carried out with the borrowed money. Most of the borrowed money was not allocated to these informal
development projects and they piled up in the politicians’ safes. Basic needs like education,
health, transportation was restricted, and people’s property was sold wholesale. All the
governments that ruled this country for 74 years systematically dragged the people from crisis to catastrophe and implemented a policy of personal gain than public benefit. The Rajapaksas and their followers are responsible for a significant part of this crisis. The current economic, political and social crisis is not the creation of the people, it is the creation of the entire ruling regime including the Rajapaksas.

Therefore, demanding the resignation of the government including the President Gotabaya
Rajapaksa is the struggle that arose was not a mere coincidence or an irrational protest, but it was systematically created by the ruling policy implemented by imposing force on the
people by oppressing the people economically. The rulers who pushed the society into a severe economic and political crisis are now trying to consolidate their power by imposing an undemocratic coercive military rule on the society and repressing the people.

Ranil Wickremesinghe, who usurped the presidency by carrying out a constitutional coup
after the ouster of Gotabhaya Rajapaksa is a notorious politician with a notorious history of
oppressing the people by running torture centers like Batalanda. In the 2019 presidential
election, Gotabhaya Rajapaksa was given 69 lakh votes by the people to oust this disgraced
politician from power. Therefore, Ranil Wickramasinghe is a person who was rejected by the
people even before Gotabaya Rajapaksa. It is clear that when such a person became the
executive president with all the powers, it was not a mere coincidence that he
undemocratically used military force and unofficial mobs to suppress the protesting people.
Ranil Wickramasinghe, who has no peoples’ base, and the followers of the Rajapaksa gang,
which still has a parliamentary majority, are currently unleashing massive repression on the
people. Repressive incidents such as illegal arbitrary arrests, beatings, abductions, character assassinations, social media campaigns, threats, sudden raids on homes and offices of activists of student organizations, trade unions, and mass organizations are becoming common in this country. They are running a regime that treats the people like terrorists and is spreading fear throughout the society. We strongly urge all of you who read this report to help defeat this repression of the Ranil-Rajapaksa junta and protect the people’s struggle for a better life.

Read the full report as a PDF: Report on attacks of peaceful protesters in Sri Lanka – updated till 20th August