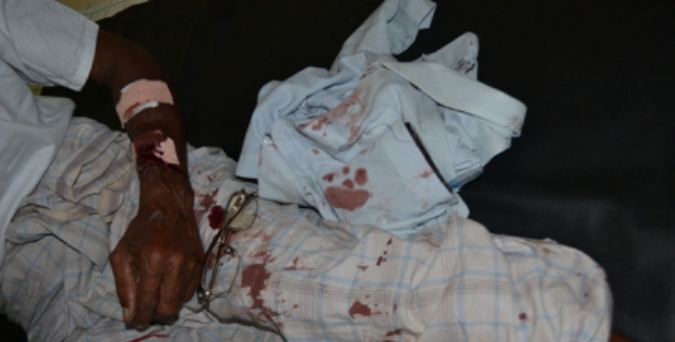 As the Government of Sri Lanka was assuring of its commitment to all human rights for all people in Sri Lanka before the United Nations Human Rights Committee, a leading human rights activists,  was assaulted in Vavuniya, Northern Province. The Sri Lanka delegation to the 112th session of the UN Human rights Committee which reviewed the HR situation in Sri Lanka reiterated that the people’s right to free expression and association are completely secured after the war’s end. The GoSL Ambassador was speaking of his governments zero tolerant policy of human rights violations at 1.00 PM Geneva time (4.30 PM Sri Lanka time) and Mr. Thevaraja was assaulted around 5.30 PM in Sri Lanka.

In an e mail message on the attack Mr. Brito Fernando, the President, “ Families of the Disappeared Persons’ said that ”Mr. G . Thevaraja, the president of the ” Vavniya Citizen’s Committee was attacked, today, by 4 persons came in 2 motor bikes, after Mr. Thevaraja leaving a Citizen Committee meeting in Vavniya,to discuss the proposed protest ” Free Jayakumari ” to be held on 10th October in Vavniya at 10 am.”

Under the caption of ‘President of the Vavuniya Citizens Committee attacked for organising Jeyakumary protest’ the #Freejayakumari blog reports that ” Mr. G. Thevaraja was assaulted by 4 persons in civil, who rode two motorbikes and attacked him with iron rods. His head was saved due to him having worn a helmet, but even his helmet was damaged in the attack. Whilst beating him, his attackers also shoutingly threatened him saying, “You are going to organize a campaign for Jeyakumary. If You do not stop that, we will kill you!” The attack took place between the Nedunkerny army camp and police station. The attackers were allegedly non-Tamil speaking. He was rushed to the Nedunkerny hospital and has been since transferred to the Vavuniya hospital to receive treatment. His condition is not believed to be critical at the moment.”