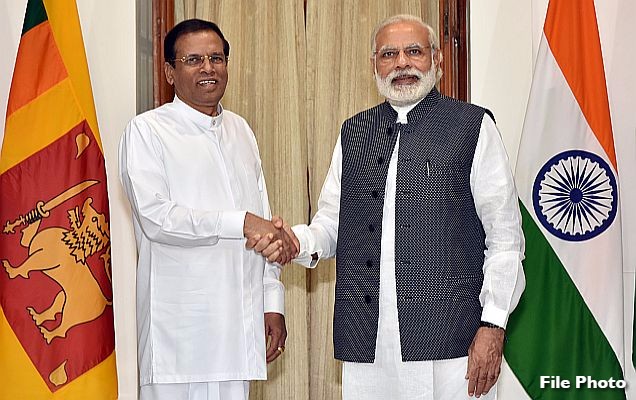 This week, Sri Lanka is “Dhammadvipa”, the island of Buddhist philosophy, as it celebrates United Nations Vesak Day to mark the birth, enlightenment and death of Lord Buddha on Friday. There have been fourteen international celebrations, but this is Sri Lanka’s first time as host, even though it was instrumental in the UN’s declaration of an international day for it. India had backed the resolution in 1999 by Sri Lankan Foreign Minister Lakshman Kadirgamar (later assassinated by an LTTE sniper at his Colombo residence). So it is only fitting that Indian Prime Minister Narendra Modi speak as chief guest at a massive, international conference on Buddhism, organised for the occasion in the Sri Lankan capital. For a small country with a bloody contemporary history, the significance of celebrating UN Vesak Day that recognises Buddhism’s contribution to spirituality, humanity, universal peace and compassion worldwide is not lost on anyone. The Sri Lankan government continues to face an international challenge over charges of human rights violations against civilians when it crushed the LTTE to end a brutal three-decade-long civil war in 2009.

For India too, the visit is significant. Against the backdrop of growing incidents of communal violence at home and uncharitable global commentary around cow vigilantes and anti-Romeo squads targeting Muslims and mixed religion couples, the Prime Minister will use this chance to project India’s own constitutionally-protected core values of secularism and tolerance at a global forum. According to reports, 72 out of 85 countries invited have confirmed their attendance.

This is Prime Minister Modi’s second visit to Sri Lanka since he assumed office. In March 2015, he made history as the first Indian PM to go there on an official, bilateral visit in 28 years, and the first one to visit Jaffna, ever. Along with three visits by Sri Lanka’s Prime Minister Ranil Wickremesinghe and two by President Maithripala Sirisena to India since the 2015 elections, these trips reflect Delhi’s aggressive diplomacy to rebuild the relationship with Colombo that hit rock bottom in the years immediately after the war. Delhi pushed then president Mahinda Rajapaksa to focus on relief and rehabilitation for Tamil civilians who had been caught in the crossfire. Currently, Delhi’s portfolio of financial assistance to Sri Lanka is at 2.6 billion dollars, out of which nearly 450 million dollars is in the form of grants.

But even as Delhi provided funds and resources for de-mining, hospitals (the PM opens a new one in Dickoya on this visit), rail and road construction and housing in Jaffna and adjoining areas, Rajapaksa made clear his preference for Beijing as a regional, global partner over Delhi. Rajapaksa’s singular motive: to ensure he had the backing of a global power who would take on the West at the UN and support his aggressive military solution to the civil war, even if it meant turning a blind eye to questionable violations against Tamil civilians in the bargain. So Rajapaksa, riding a wave of victory and popular support, baited India by awarding the crucial Hambantota port and other infrastructure projects to the Chinese – moves that also ultimately raised the suspicion of his own countrymen. The hero who won them the war has since become a political pariah charged with corruption and accused of leading Sri Lanka into a nasty debt-trap with the Chinese for projects that have not yielded economic returns even today.

As Delhi now uses these opportunities to seize primacy once again, Rajapaksa is also trying to win back lost ground. He has backed voices like the Thera Buddhist MP Wimal Weerawansa, calling for black flag protests against India during the Prime Minister’s visit, accusing the current United National Party (UNP) government of allowing India to “colonise” Sri Lanka. These voices are especially significant in the context of recent protests by unions of the state-run Ceylon Petroleum Corporation’s oil workers against an agreement giving India the rights to develop and use a World War 2 era oil tank farm with 99 storage tanks in Trincomalee on the island’s north-eastern coast. Ironic, given that it is a revival of an old deal struck by India and Sri Lanka nearly two decades ago, while the war was still on. The agreement is now part of a mega Memorandum of Understanding on Economic Cooperation that covers energy, power, roads, infrastructure, agriculture and the fisheries sectors that was signed when PM Wickremesinghe was in Delhi last month, many of them aimed at making the Trincomalee area a hydrocarbon hub of critical geo-strategic importance for the region.

But domestic sensitivities in Colombo that stalled the original agreement on the tank farm for years are now the reason for the current government keeping it low key. The MoU has been tabled in the Sri Lankan parliament, and Prime Minister Wickremesinghe has defended it vigourously, but in order to prove he is not “selling out” to India, his government is quick to point out two things. One, that development at Trincomalee will take place under a Japan-India-Sri Lanka Joint Working group to be set up; and two, that no bilateral agreements will be signed during Prime Minister Modi’s visit this week. (Curious, given the detailed MoU also provided timelines by when individual project agreements will be signed and become operable). In fact, Ranil Wickremesinghe leaves Colombo for Beijing on the 13th, to attend China’s Belt and Road Initiative summit- the very project that threatens India’s geo-strategic importance, as it incorporates the seas of the Indian Ocean to the south and east, and the lands of South and Central Asia to the north and west, to expand China’s sphere of influence. With Beijing’s advances, time is clearly of the essence, and the need to regain ground lost to China is of paramount strategic importance for India.

But India must know that in spite of having assiduously worked to revive its flailing relationship with Colombo since Rajapaksa’s ouster, the overall improvement in bilateral ties comes at the cost of diverting some attention from progress on the Tamil question. The Sirisena/Wickremesinghe government is yet to address concerns over missing persons, yet to fulfil promises for a new constitution that devolves more powers to the Tamil North and East, and yet to return lands overtaken by the Sri Lankan army during the last phases of the war. A delegation of the Tamil National Alliance, led by its leader R Sambandan, will meet Prime Minister Modi during his 24-hour visit to in an attempt to ensure India is still paying attention to their issues.

As India becomes a factor in domestic politics and Mahinda Rajapaksa plots his Sri Lanka Freedom Party’s (SLFP) political return by taking on Delhi, the diplomatic tightrope has gotten trickier. Colombo’s continued engagement with China is a concern, but India cannot tell Sri Lanka who to deal with. Under the circumstances, the Prime Minister’s visit to commemorate Vesak is a chance not only to project India’s constitutional values, but also reassure the people of Sri Lanka – both Sinhala and Tamil – that India’s commitment to development in Sri Lanka is in both countries’ mutual interest.

This commentary originally appeared in NDTV.