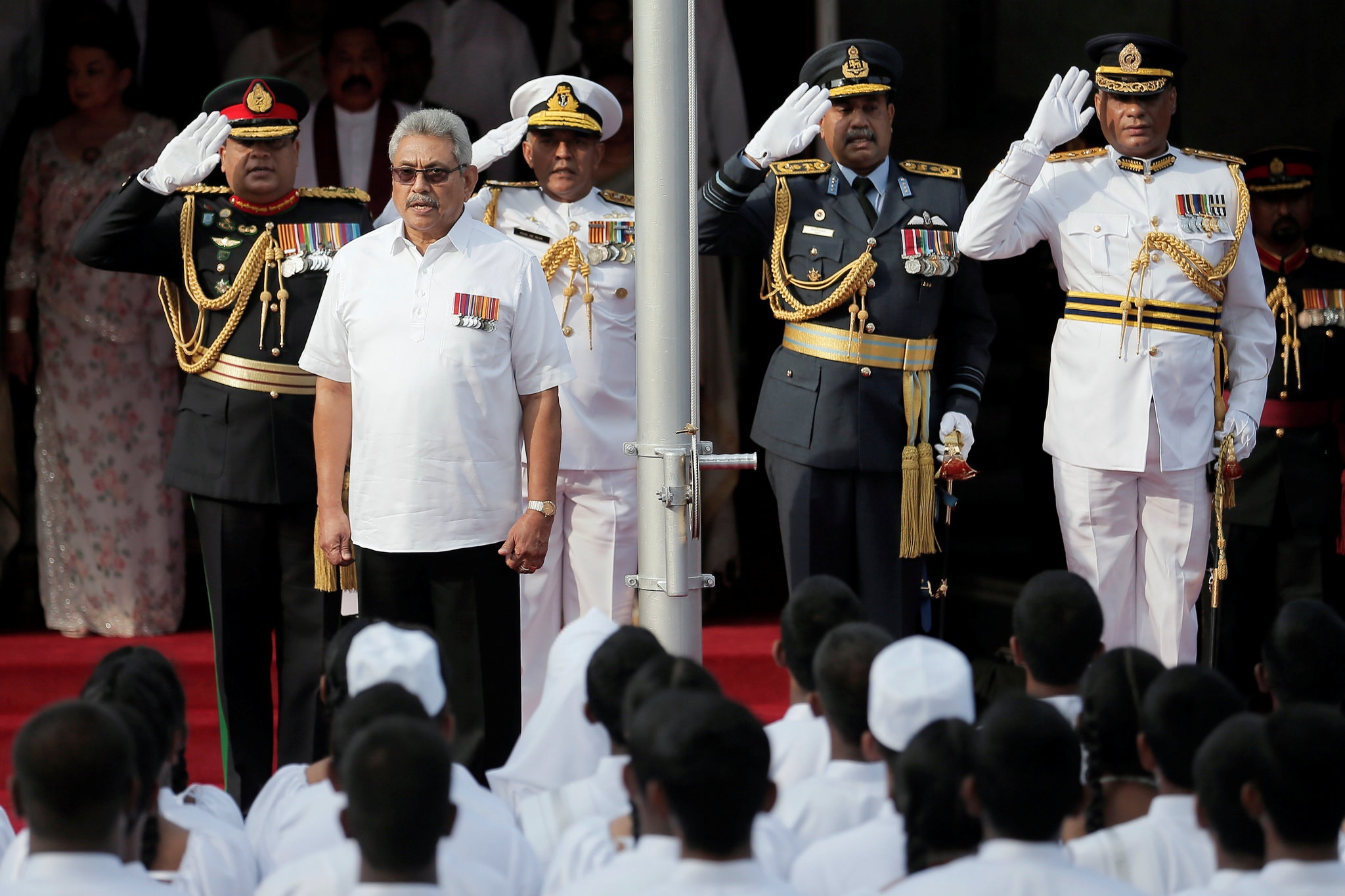 Image: President Gotabaya Rajapaksa, second from left, has been accused of war crimes from his time as defense secretary, when he oversaw the last bloody years of the country’s civil war.Credit…Dinuka Liyanawatte/Reuters.

By Maria Abi-Habib and Dharisha Bastians.

Sri Lanka’s president has pardoned a soldier who was sentenced to death for killing eight civilians during the country’s civil war, leading to accusations that the government was taking advantage of the chaos from the coronavirus pandemic to free a wartime ally accused of atrocities.

The pardon reverses one of the very few convictions from the 26-year civil war, during which dozens of militants and military officers were accused of war crimes. The pardoned soldier, former Staff Sgt. Sunil Ratnayake, was sentenced in 2015 for blindfolding eight civilians from the Tamil ethnic group, slitting their throats and dumping their bodies into a sewer in 2000. Three of the victims were children.

The pardon brought outrage from rights activists and opposition politicians, but little obvious reaction from the broader Sri Lankan public, which is under a strict curfew in order to contain the spread of the coronavirus.

President Gotabaya Rajapaksa instructed the Ministry of Justice to release Mr. Ratnayake from prison on Thursday. Mr. Rajapaksa, who was elected in November, is himself accused of having ordered war crimes during the civil war, when he served as defense secretary.

The Sri Lankan government did not immediately respond to requests for comment.

The United Nations called the pardon an “affront to victims” and another example of Sri Lanka’s failure to hold war criminals to account.

“This was one of the rare human rights cases from the decades-long conflict that had ever reached conviction,” a spokesman for the U.N. High Commissioner for Human Rights, Michele Blanchett, said on Friday.

The chairman of the House Foreign Affairs Committee in the United States, Representative Eliot Engel, condemned the pardon in a Twitter post on Friday.

Amnesty International accused the government of taking advantage of a world distracted by the coronavirus to dodge international condemnation.

“Using the pandemic as an opportunity to release those convicted of heinous crimes is reprehensible,” Amnesty International said in a statement.

The eight Tamil civilians were killed as they returned to their homes to salvage belongings in the village of Mirusuvil in Northern Province. Their village had come under intense shelling, and many of their homes had been destroyed. Mr. Ratnayake killed them when they stopped to pick fruit from trees, prosecutors said.

Mr. Ratnayake’s trial lasted over a decade, and he was condemned to death row after his appeal was rejected by the country’s highest court in May 2019. Sri Lanka commutes every death sentence to life imprisonment.

The sentence had been held up as a glimmer of hope that Sri Lanka’s justice system was capable of holding war criminals accountable. Military officials testified against the soldier.

President Rajapaksa is a retired army officer, and he and Mr. Ratnayake served as members of the same regiment during different periods of the war. As a candidate for president, Mr. Rajapaksa pledged to release “war heroes” jailed on offenses he dismissed as “baseless.”

As defense secretary, Mr. Rajapaksa spearheaded the defeat of the Tamil Tiger rebels in 2009, ending the civil war. The U.N. estimates that some 40,000 Tamils died during the war’s final stages, and an international inquiry set up in 2014 found credible evidence of war crimes by government troops and rebels. Military officials, however, have rarely faced justice in Sri Lanka’s domestic courts.

“Why was it a priority in the midst of a pandemic to grant this particular pardon, given the horrific facts of the case and with the prisoner’s conviction, which had been upheld by the Supreme Court after a full process of appeals?” asked Asanga Welikala, a Sri Lankan lawyer and the director of the Edinburgh Center for Constitutional Law.

Opposition lawmakers also condemned the pardon. “Countries protect the reputation of its armies by punishing miscreants who bring dishonor and ignominy,” a former foreign minister, Mangala Samaraweera, said on Twitter.

But social media pages supportive of the president were flooded with praise for the pardon, underscoring the continuing divide over the war and the reconciliation efforts that have followed.