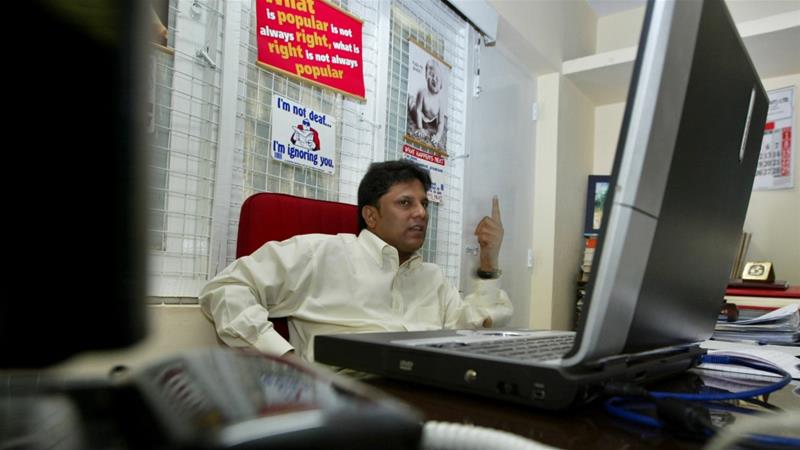 Sri Lankan police have arrested five military intelligence officers on suspicion of killing a well-known anti-establishment newspaper editor and orchestrating attacks on other journalists and dissidents under the former regime, according to a legal source.

Lasantha Wickrematunge, a sharp critic of former President Mahinda Rajapakse, was assasinated by unidentified gunmen while driving to work in the capital Colombo in January 2009.

His killing sparked an international outcry and shone a spotlight on violence against members of the press in Sri Lanka.

The source involved with the investigation said on Monday that the five men were taken into custody over the weekend – initially over the May 2008 abduction of journalist Keith Noyahr, who had criticised military leaders.

“Detectives have found evidence to show that the group which abducted Noyahr was also involved in the assassination of Sunday Leader editor Lasantha Wickrematunge and several other attacks,” the source told the AFP news agency on condition of anonymity.

Detectives told a magistrate on Sunday that the five accused had operated a military death squad led by a top defence official who has not yet been named.

More senior people are likely to be arrested in the coming months, the source said.

Free Media Movement, a rights group, gave a cautious welcome to the arrests, urging the government to ensure an independent investigation into the allegations and resist “undue influence” from the powerful military.

President Maithripala Sirisena has publicly criticised police for holding military suspects for long periods, and another group of army intelligence officers arrested in 2015 over the abduction of cartoonist Prageeth Eknaligoda was later given bail and reinstated.

Rajapakse, the former president, and several members of his family are under investigation for large-scale financial fraud and murder during his 10 years as president, in which 17 journalists and media workers were killed.

All deny any wrongdoing and in turn accuse the new government of a political vendetta.

Wickrematunge, an investigative journalist who wrote about corruption, had accused Rajapakse’s defence secretary and brother Gotabhaya of taking kickbacks in arms purchases, and was due to testify in court when he was killed.

He was attacked with sharp objects by a group of men on motorcycles who blocked his vehicle.

Wickrematunge’s remains were exhumed in September under a court order after police investigators sought permission for a new examination due to contradictory medical and post mortem examination reports..

A retired army intelligence officer was found hanged at his home in October with a note claiming responsibility for the journalist’s death.

But police have said they do not believe the claim and are treating the officer’s death as a murder.
AJ