Are we becoming a sexist society? 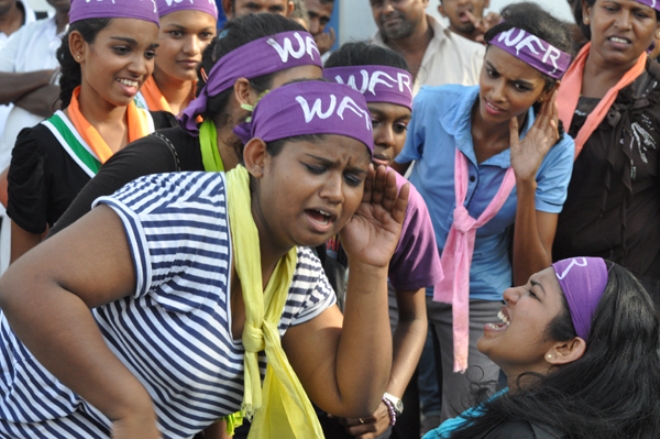 In terms of gender equality, Sri Lanka it would appear, for all ostensible purposes, is standing head and shoulders above other nations. After all, we did produce the first woman Prime Minister in the world and then several years later went on to elect a woman, albeit the daughter of the first woman Prime Minister, as an Executive President. Both created history by ousting some mercurial rulers of the time. Unfortunately, this glass ceiling shattering forward leap towards gender emancipation does not seem to have percolated down to other spheres of activity in the country, especially employment. At least that’s what the findings of a survey on Sri Lanka’s Labour Force indicate.

In fact the survey, results of which were released by the Department of Census and Statistics recently, reveal the job market to be not very women-friendly, recording unemployment as being ‘acute’ among the educated females than their male counterparts. This glaring acuteness cannot be disregarded as a random occurrence, more so because 11.2% of GCE A/L qualified women are among the unemployed, as opposed to 5.0% men. What is even more astonishing is that these figures are culled from among those who are supposed to be most active in the job market. And this is for the Fourth Quarter 2013.

Incidentally, the overall unemployment figure for the 15 to 24 age group is 19.0%, the highest rate of unemployment recorded so far for a particular time period. The percentage includes the 8.1% GCE A/L qualified, which also happens to be the highest. It is interesting what the male-female unemployment disparity reveals when taken in a context of the overall sex ratio in the country, 94 males per 100 females, and how it manifests in the job sphere.

With the advancement of the country’s economy to suit the needs of the 21st century, of course in accordance with the assertions made by the Central Bank of Sri Lanka (CBSL), the demand for high-ranking jobs, both in the State and private sectors should ideally reflect the gender composition of the country. For it not to be so warrants close scrutiny to determine whether the ‘acute’ disparity in unemployment is due to a wer number of women applying for the lucrative jobs on offer or whether there is any discrimination against women in the country.
[Lanka Truth photo: a womens’ street drama group at the JVP womens’ organisation protest cost of living/ 12.08.14]

Employment in Sri Lanka is ostensibly equal opportunity and merit based, though extreme politicization and pervading nepotism gives merit an unholy new twist, especially in the State sector. Still, gender is alien territory for most male dominated managements, which leads one to ponder whether, even in this enlightened era, there is a natural tendency of men to hire their own kind for jobs perceived as being beyond the capability, muscle power or commitment of the female force.

No sane person would claim that men are cleverer or more capable than women in any given sphere provided both genders have been exposed to similar sets of circumstances and education. In gendered equal societies in the West, this imaginary glass-wall and ceiling has been broken and women are on the march towards the best jobs and positions in the market and are in fact in the lead, whether in administration, engineering, medical sciences, astronomy, business or politics.

Yet the same singularity is not realistically evident in Sri Lanka. One can understand if such an occurrence could be attributable to a male-dominated religious or any other social order. But as it isn’t so in Sri Lanka, the question that arises then is WHY? Why are A/L qualified women being discriminated in the job market?

Sri Lanka is not a feudal society. In a sense, the country came of age with the granting of universal franchise in 1931 to all citizens, irrespective of gender, caste, race or creed. And with the empowering of the first-ever elected woman leader in a free country, Sri Lanka stood as a lone example enlightened along gender lines in Asia. Yet, we seem to have lost our way somewhere. How else does one explain the discordance in the job market for higher paid categories, were women fall behind the male component by a ratio of two to one
-August 13, 2014
Editorial Ceylon Today