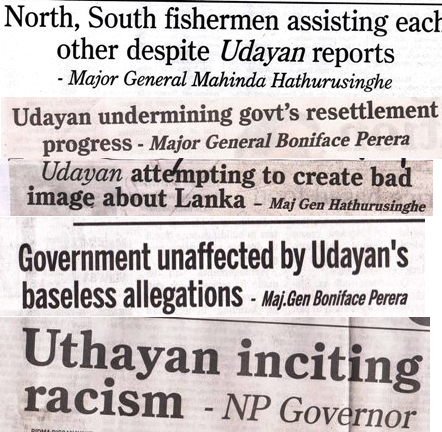 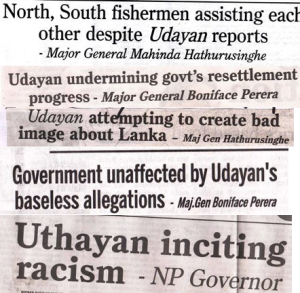 Eswarapatham Saravanapavan
I am writing in earnest to draw your attention to the rapidly worsening environment for Uthayan Daily  to continue with  the freedom of press in Sri Lanka.
I have no doubt that you will agree with the norm that freedom of expression is not only a universal human right but also fundamental to a democratic Society. It has always been difficult for successive government in Sri Lanka to coexist with a free and independent press in Sri Lanka. However, the government headed by president Rajapakse has been increasingly intolerant towards criticism in the press and towards the publishing of news that reflects poorly on his government on human rights issues, and Land grabbing in the north and east.

One of the targeted causalities of this hostility between government and independent press in Sri Lanka is the UTHAYAN news paper, one of the county’s largest independent ethnic Tamil language Daily News paper printed and published from Jaffna for the last 28 years.

Since December 1986, The UTHAYAN Group has faced massive disruptions as chronicle in the attached documents. It is clear that current objections to the UTHAYAN’s existence stem from its independent editorial policies as well as due to the fact that I am not only the Managing Director of the paper but also a duly elected member of TNA, the largest Tamil opposition party in Sri Lanka.

While preparing this dossier, I have attempted to details of incidents to facilitate your assessment as a key advocate in the press right movement nationally/internationally. Recent events in Sri Lanka indicate government’s relentless and coercive methods /campaign to muzzle the press and curtail the judiciary.

If you refer the attached link to this letter, you find a chronology of events that cover the continuing pressure, intimidation, threat to the life of editors, journalists and owners of UTHAYAN from GoSL and its agents for the last two years.

I therefore urge you to extend your help in this matter and would appreciate if you address your concern to the relevant authorities  and  HR organizations who are engaged in freedom of press.

UTHAYAN: The National Tamil Daily – First Published on 27thNovember, 1985, to work towards the Political Freedom of Tamil People and their Economic upliftment and Social Cultural Progress.
After the 19th session of U.N. Human Rights Commission meeting held In March 2012.
27.12.2012:
Uthayan Editor Mr.T.Premananth was assaulted by an army officer, when a group of army persons entered the Jaffna University premises to prevent students from lighting lamps in memory of the deceased Tamil people in the war. Mr. Premananth was taking photographs of the incident having gone there on information received that the army was harassing the student s. He was hospitalized for 2 days and took treatment for his neck sprain due to the attack.
27.12.2012:
Uthayan Managing Director Mr.E.Saravanapavan whovisited at the scene of pandemonium created by military personnel in civil and the police. The army solders who were in civil dress have throw stones at him and also to his vehicle.
27.12.2012:
The Media reporters who have gone to university premises to collect news was attacked by armed forces on
27.12.2012.
28.12.2012:
The Managing Director of Uthayan Mr.E.Saravanapavanwho is also a member of parliament had visited the university no sooner he heard that a clash between the students and the Police. He was prevented by the army to enter but he managed to reach the destination where the clash was took place. When he returned to take his vehicle hef ound that all the glasses of his van fully broken and damaged. The surprising matter is that the vehicle was parked near the army check point.
10.01.2013:
Uthayan newspaper delivery employee Mr.N.Pratheepan (30 years Old), was waylaid and brutally attacked by some unidentified mask mob with iron bars wrapped with barbed wire sustained serious injuries all over his body and also a fracture in his right hand. He has been admitted to Jaffna Teaching Hospital in a critical condition.
15.01.2013:
At a protest rally organized by Equal rights movement in front of Jaffna bus stand, to give pressure to release the Jaffna university students, the crude oil was thrown on media reporters who were there to cover news assignments. Uthayan reporter Mr.K.Nirojan is also one of the journalists who were affected.
26.04.2012:
Minister DouglasDevananda has filed action in the court demanding thousand million rupees to control and suppress the freedom of expression and freedom of publication of UTHAYAN newspaper. This legal action is filed for the news item that pertains to the contents of wikileaks exposing the murders of the people by the E.P.D.P cadres.
15.05.2012:
Minister Douglas Devananda has filed action in the Jaffna court demanding thousand million rupees against the Managing Director and the chief Editor of Uthayan saying that libel news items are being published by Uthayan news paper by distorting and tarnishing his public image.
23.072012:
Major General Jegath Jeyasooriya commandorof the Srilankan Army has filed an action in the courts demanding Rupees Hundred Million for a news item appeared in uthayan news paper on11.07.2012 , which he claim that it conveys a wrong message to the readers to the effect that as the commander of the Srilankan army he has no control over subordinate officers.
07.02.2013:
Two unidentified men has chased the Uthayan delivery employee at Kopayjunction, who has taken newspapers to Valvettithurai for delivery. But he escaped without being attacked.
One of the other Tamil news paper delivery employee was waylaid and brutally attacked by some unidentified men at Puttur junction and the Motor cycle in which he travelled with the news paper was burnt.
15.02.2013
The Uthayan online journalist’s camera has been plunged and damaged byan Army officer at the Satyaraha held by the people of Valikamam nor that Tellippalai in front of the Durghaiamman temple.
03.04.2013
The branch office of UTHAYAN at Killinochi was attacked by hooligans atabout 4.30Am while the newspaper bundles were unloaded from thedelivery vehicle. The delivery staffs were attacked with wickets byseven hooligans who were wearing masks.
The manager ArumugamPonrajah (61Yrs), delivery staff Kitinan Piratheepan (28 Yrs) an other delivery staffs Kuppusamy Visvanathan (38Yrs), V.Sukirthan (29Yrs) were attacked and admitted the government hospital, Killinochi. The electronic items such as computers photocopy also smashed and destroyed. An entry was made at killinochi police station.
13.04.2013
For the early morning at about 4.50Am, three gun men with A.K.47automatic rifles covering their heads with helmets intruded into the heart of UTHAYAN machine section at the main office. They shot & damaged the switches and burnt the main electronic panel board of the printing machine made it unusable and burned down the printed papers and bundles to ashes.
Before damaging the printing machine, they warned that nobody should shout. After damaging the machine they burned the papers by pouring diesel which they brought.
Share
Facebook
Twitter
WhatsApp
Pinterest
Email