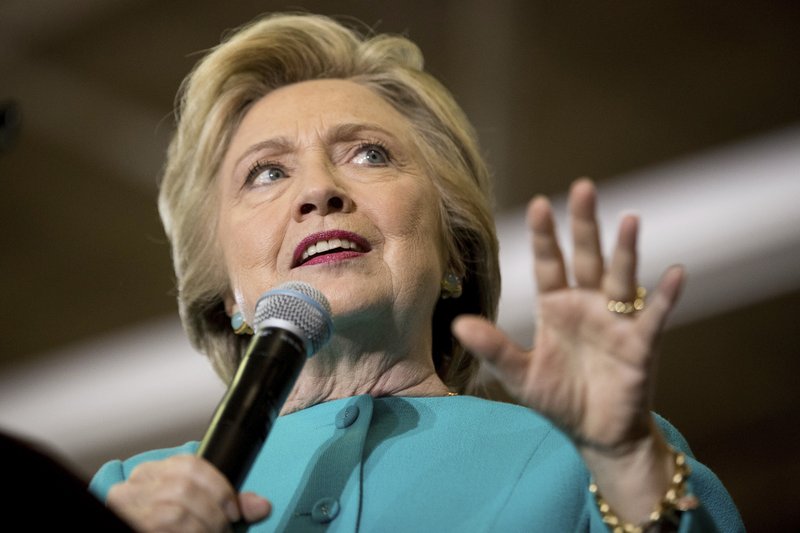 A new Associated Press-GfK poll released Wednesday finds the Democratic nominee has grabbed significant advantages over her Republican rival with just 12 days left before Election Day. Among them: consolidating the support of her party and even winning some Republicans.

“I’m going to pick Hillary at the top and pick Republican straight down the line,” said poll respondent William Goldstein, a 71-year-old from Long Island, New York, who voted for Mitt Romney in 2012. “I can’t vote for Trump.”

Overall, the poll shows Clinton leading Trump nationally by a staggering 14 percentage points among likely voters, 51-37. While that is one of her largest margins among recent national surveys, most show the former secretary of state with a substantial national lead over the billionaire businessman.

The AP-GfK poll finds that Clinton has secured the support of 90 percent of likely Democratic voters, and also has the backing of 15 percent of more moderate Republicans. Just 79 percent of all Republicans surveyed say they are voting for their party’s nominee.

With voting already underway in 37 states, Trump’s opportunities to overtake Clinton are quickly evaporating — and voters appear to know it. The AP-GfK poll found that 74 percent of likely voters believe Clinton will win, up from 63 percent in September.

Troubles with President Barack Obama’s signature health care law have given Trump a late opening to warn voters against putting another Democrat in the White House. But even Republicans question whether the rising cost of insurance premiums is enough to overcome the damage the businessman has done to his standing with women and minorities.

Even if Clinton’s support plummets in the contest’s closing days, or she’s unable to motivate strong turnout in her favor, it’s not clear that Trump could marshal the resources to take advantage and collect enough states to win the 270 electoral votes needed to claim the White House.

Clinton’s team has overwhelmed Trump’s campaign in its effort to turn out voters.

An Associated Press review of campaign finance filings finds that her campaign, the Democratic National Committee and Democratic parties in 12 states have more than three times as many paid employees as Trump’s campaign and the main Republican organizations supporting him. Clinton and Democrats had about 4,900 people on payroll in September, while Trump and Republicans had about 1,500.

Both sides benefit from legions of volunteers knocking on doors and making phone calls to voters, as well as outside forces such as unions and super PACs pitching in on voter turnout operations. But key Republican groups such as the ones funded by the conservative billionaire Koch brothers are sitting out the presidential race because of their distaste for Trump, further extending Clinton’s likely advantage at getting out the vote.

The strength of the Democratic turnout effort appears to be paying dividends in states where voting is underway. Nationwide, more than 12 million voters have already cast ballots, according to data compiled by the AP, a pace far quicker than 2012.

In North Carolina, a must-win state for Trump, Democrats lead Republicans in early ballots, 47 percent to 29 percent. The Democrats hold an advantage even though turnout among blacks, a crucial voting bloc for Clinton in the state, is down compared to this point in 2012. Strategists in both parties attribute the lower black turnout in part to an early reduction in polling stations, though more sites are to open in the days leading up to Nov. 8.

In Florida, a perennial battleground, Democrats have drawn even to Republicans in votes cast, reaching that milestone faster than in 2012. Traditionally, Republicans do well initially with mail-in ballots. But Democrats were able to keep it close, putting Clinton in position to run up the score during in-person voting.

Clinton also appears to hold an edge in Nevada and Colorado based on early returns. David Flaherty, a Republican pollster based in Colorado, said the data signal “a Democrat wave in the making.”

Buoyed by support from white voters, Trump looks strong in Ohio, Iowa and Georgia, a Republican state where Clinton is trying to make inroads. But wins in those states would still leave him well short of the required 270 Electoral College votes.

Trump’s top advisers have conceded in recent days the businessman is trailing Clinton. But they point to his large rallies and enthusiastic supporters as an indication he could be poised for an upset. Clinton draws smaller crowds to her events and has been perceived by some voters a lesser of two evils.

“We have a couple of different paths to get to 270 and we’re actively pursuing them,” Kellyanne Conway, Trump’s campaign manager, told MSNBC on Monday.

The AP-GfK poll suggests Clinton’s advantage is about more than just voter dislike for Trump. Clinton supporters are more likely than his backers to list their candidate’s leadership, qualifications for the presidency and positions on issues as major factors in their support.

Trump’s unpopularity has opened surprising opportunities for Clinton as the White House race barrels toward its finish. Her campaign is actively competing for Arizona, a state that has voted for the Democrat in only one presidential race since 1952, and she is also spending money in Georgia, a reliably Republican state over the past two decades.

Both states have been on Democrats’ wish lists in recent years given their increasingly favorable demographics, though the party had little expectation they might flip this year. Hispanics are a growing share of the Arizona electorate, while Georgia is on its way to becoming a majority-minority state.

The real electoral map surprise this year is Utah, one of the most conservative states in the country. Utah’s heavily Mormon population has turned its back on Trump, providing an opening for third-party candidate and Utah native Evan McMullin to carry the state. Stripping Trump of six Electoral College votes Republicans have never had to worry about would further narrow his already slim path to victory.

With so much appearing to lean in their favor heading into Election Day, the Clinton campaign’s biggest concern is that some supporters take victory for granted and don’t show up to vote.

“Donald Trump said he could still win, and he could if our people get complacent,” Clinton communications director Jennifer Palmieri said.

The AP-GfK Poll of 1,546 adults, including 1,212 likely voters, was conducted online Oct. 20-24, using a sample drawn from GfK’s probability-based KnowledgePanel, which is designed to be representative of the U.S. population. The margin of sampling error for all respondents is plus or minus 2.75 percentage points, and for likely voters is plus or minus 3.1 percentage points.

Respondents were first selected randomly using telephone or mail survey methods and later interviewed online. People selected for KnowledgePanel who didn’t have access to the internet were provided access for free.