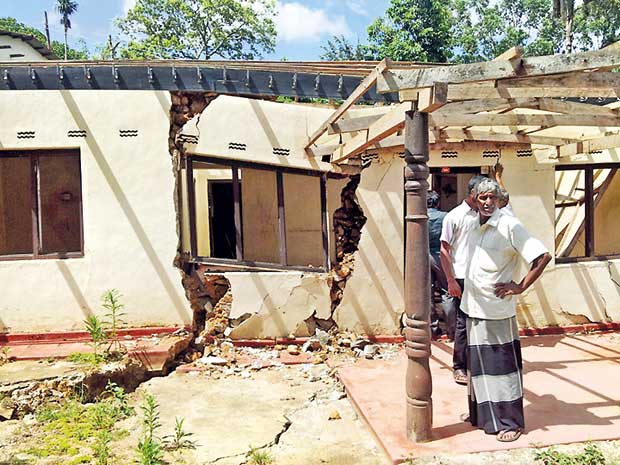 Image: Hundreds of houses like this are  engendered by the project. ( Daily News photo)

Although 42 days have passed since thousands of victims of the Uma Oya ‘Development’ Project gathered at Bandarawela demanding justice, nothing has been done to assist them and thus creating the doubts about the sincerity of the Rs. 300 million compensation package promised by the President, Center for Human Rights (CHR) said issuing a press release.

Most of the directives of the President, approved by the Cabinet as well as the promises of the Three member Ministerial Sub Committee, have not been implemented on the ground. CHR Executive Director states that Badulla District Secretary Nimal Abeysisri, who has received a service extension, is ignoring the orders of the President.

For some reason Bandarawela Divisional Secretary Nihal Gunaratne, appointed as the additional District Secretary to implement the compensation package, has still not assumed duties.

Listed below is the assistance given by the government 42 days after massive protests in Bandarawela.

1. The progress on agriculture is nil. Not a single rupee has been paid as compensation for farmers in the last 42 days. Applications to request for compensation have not been distributed in Hali Ela, Uva Paranagama and Welimada until August 8.

2. Not a single house that belong to the government, promised to hand over to the people, have been given to the people.

3. Not a single tube well has been built. Although the Water Board commenced drilling they pulled back due to the directives of the District Secretary.

5. Nothing has been done to construct alternative routes.

6. Not a single temporary shelter had been built.

7. Not a single thing has been done to ease the suffering of those now residing in several government buildings.

All this is due to the actions of a district secretary who is brazenly ignoring the orders of the President.

CHR urges the government to take immediate action to assist the victims of Uma Pya project before the north eastern monsoon rains.