Another blatant attack on a Mosque in Sri Lanka 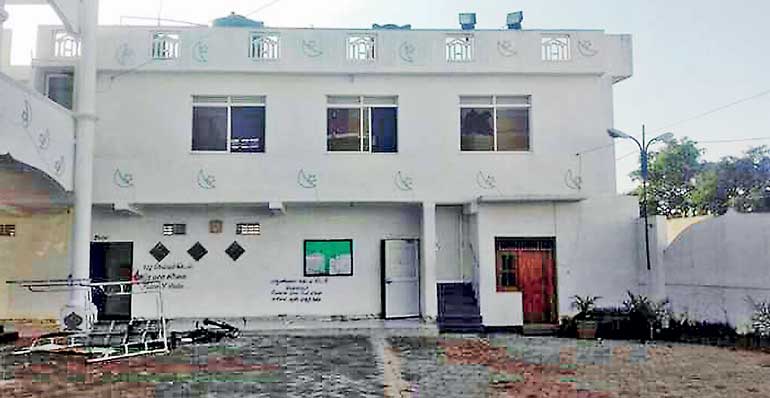 Another attack, another blatant act of vandalism on a place of worship. Such attacks getting pretty regular and normal in Sri Lanka by the day sans any visible enforcement of the law to apprehend miscreants and bring them to justice. This time it’s the Kohilawatte Mosque in Sedawatte that is attacked sans any provocation. A wanton attack with considerable damage to property.

Muslims world over eagerly preparing in anticipation of welcoming the blessed month of Ramadan which is just around the corner. This preparation taking place at every level among Muslims all over the world. Usually mosques undertake minor refurbishments this time around.

A fresh coating of paint is pretty standard coupled with other space related needs. All this in preparation to provide congregants a better atmosphere for their daily acts of worship during the blessed month. It’s also a desire to accommodate as many and facilitate their acts of worship. We just witnessed similar acts of renovation and accommodation in anticipation of Vesak. The objective very much similar.

Sawm or fasting is the fourth of the Five Pillars of Islam. Muslims required to fast during Ramadan, the ninth month of the Islamic calendar. During the 29/30 days of Ramadan all adult Muslims must give up the following things during the hours of daylight: Food or drink of any sort, smoking, including passive smoking and all forms of legitimate sexual activity. Most importantly considerable portions of time spent in the mosque anticipating huge rewards.

It seems some have different ideas, sinister ideas. The Kohilawatte Mosque is attacked with stones and clubs in broad daylight by the all too familiar “unidentified” group. Resulting in extensive damage to property. Police had said no arrests had been made. If the past is something to go by there will be none.

Successive governments despite lofty pronouncements of freedom of religion and much hackneyed phrases such as “striving to” uphold the constitution have got themselves totally disrobed. They don’t seem to have any shame exposing themselves and remaining totally and clearly naked. Bogged down in the “democratic dilemma” conscious only of numbers and nothing else, they’ve lost it “all”. It seems everything boils down to the wicked numbers game and this is the truth.

None dare to choke the majority even if unending immorality seem to trickle from them till dooms day. Any corrective measure will be politically inexpedient, disadvantageous if not suicidal to the two main political parties. So minority places of worship have to be attacked, congregants intimidated, assaulted if not murdered for Sri Lanka’s democracy is to flourish.

It seems human blood sacrifice is mandatory to nourish Sri Lanka’s democracy. Law enforcement officers need to be pinioned while saffron-clad disciples of Lord Buddha are allowed to spew a verbal torrent directed at any group of their choice. Hurling some of the choicest words using a distinct style on well-groomed ASPs, SPs and other senior Police officers who dare not whimper. Long live Sri Lanka’s democracy.

Just as when we thought that the universalisation of Western liberal democracy as the final form of human government. It was indeed a heady time. The Berlin Wall had fallen, the Soviet Bloc collapsed and the United States had become the world’s unrivaled superpower. Since then colorful Donald Trump had ascended, ExxonMobil CEO Rex Tillerson as Secretary of State, an absolute shocker, and minorities terrorised in Sri Lanka to sustain majority rule there. Democracy has indeed undergone tremendous vicissitudes.

Just a couple of years ago three Muslims were killed and scores injured in clashes with hardline Buddhists in Aluthgama and Beruwala. The incident occurred with the involvement of the Bodu Bala Sena (BBS, ‘Forces of Buddhist Power’), a hardline violent ethnic Sinhala Buddhist organisation with links to the then Government. These were not isolated incidents but well planned to support a particular party and a candidate.

Obviously there remain huge gaps in terms of legal action against perpetrators of religious violence and discrimination. This has become increasingly apparent. This is despite the fact that the Sri Lankan Constitution totally and fully guarantees the right to equality, non-discrimination, and freedom of religion.

This includes choice of religion and religious worship, From November 2015 until the end of June 2016, 64 incidents of religious freedom violations against Muslims were documented in 13 districts across Sri Lanka. Hate speech constitutes the most common form of violation, comprising more than half of all reported incidents. The majority of violations against Muslims during the period were perpetrated by Buddhist nationalist groups.

The Yahapalanaya Government has to urgently and immediately address the different disconnections in the web of national administration and project its strength if it’s to survive and prevent a major backlash. There is a powder keg that’s being built and unfortunately no proper leadership seem to stridently articulate the inherent dangers and consequences so ominously hovering above.

Human life is sacred and right to worship any religion must be sincerely guaranteed to all Sri Lankans and with absolute protection.