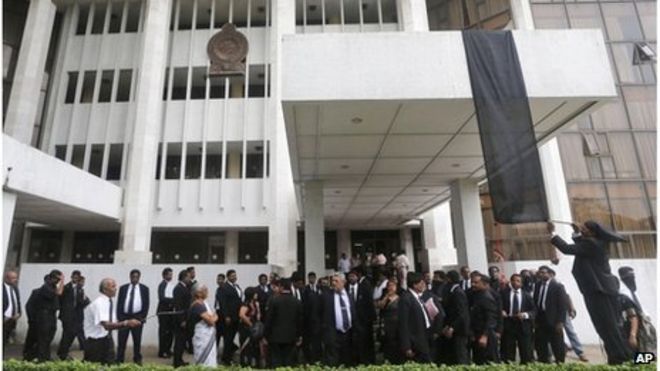 Image: Lawyers hung a black flag as a sign of protest against the government’s impeachment bid outside the Colombo court complex (January 2013)

Commenting on the way Sri Lanka Supreme Court provided immediate relief to parliamentarian Geetha Kumarasisnghe presidential council J.C. Weliamuna  has said that “the credibility of Court is at stake in such instances. She is a privileged litigant and no other ordinary citizen will be able to file an appeal and get it called to be heard within a matter of a few days.”

This could be a another  black mark on Sri Lankan judiciary, a human rights lawyer told Sri Lanka Breif.

Few days earlier in a landmark judgement, the Court of Appeal issuing a writ of Quo Warranto disqualified the MP from continuing as a Parliamentarian on the basis that she was a holder of dual citizenship, both in Sri Lanka as well as Switzerland. The order was based on a report filed to court by the Department of Immigration and Emigration where it confirmed that the Respondent, Parliamentarian Kumarasinghe was a holder of dual citizenship.

Investigations on whether Ms. Kumarasinghe was a dual citizen, in Sri Lanka as well as in Switzerland commenced as far back as the latter part of 2015, soon after the introduction of the 19th Amendment to the Constitution which brought in changes to Article 91 of the Constitution.

Article 91 of the Constitution was amended to include that “a citizen of Sri Lanka who is also a citizen of any other country” is not eligible to hold Parliamentary membership.

Parliamentarian Kumarasinghe was one of those affected by this law which stipulated that “no person shall be qualified to be elected as a Member of Parliament or to sit and vote in Parliament if he/she is “a citizen of Sri Lanka who is also a citizen of any other country’.”

According to the Court of Appeal order, the MP was disqualified from holding office and the court further directed the Attorney General, with the co-operation of the Secretary General of Parliament, D. Dassanayake to derive a mechanism to recover expenses incurred by state on the MP during her tenure as a Parliamentarian.

However, on Friday, leave to appeal was granted by the Supreme Court and the interim injunction sought by the Parliamentarian seeking a stay on the order given by the Court of Appeal on the Writ application bearing no 362/2015 was also granted till tomorrow, when the matter will be taken up for support.

While appearing in court on Friday, Counsel Weliamuna, questioned as to how the applicant managed to get the appeal called in such a short duration and without notice being served on the other parties. He further informed court that he appeared based on news reports that the matter would be heard on Friday and that no notice was served on the Respondents.

Sources reveal that the judges had only received papers that morning and had not been able to peruse the file prior to it being taken up in open court.

(With the inputs from  Sunday Observer )