And yet another suspect dies in police custody 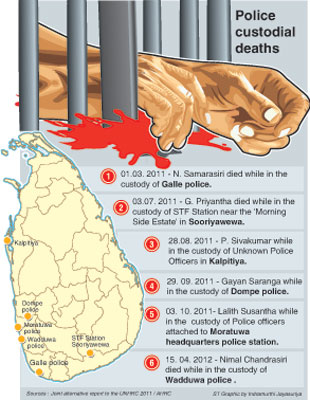 Wasantha Ramanayake
The mysterious death of Nimal Chandrasiri Dahanayke (42), a fisherman of Thalpitiya, Wadduwa, who died last Sunday (15) while in the custody of the Wadduwa Police, is the latest addition to a long list of deaths in police custody.
The deceased, Nimal Chandrasiri, who was married with two sons (22 and 20) and a daughter (17), was the fourth suspect in a litigation, where the first suspect is a hotelier of the area, who had allegedly opened his liquor shop on a Poya day.

Chandrasiri’s family believe that his death is linked to a Fundamental Rights (FR) case filed by the hotel owner against the Wadduwa Police, where the hotelier had not wanted Nimal Chandrasiri to plead guilty to the charges made by the Police, in view of the FR application in the Supreme Court against the Wadduwa OIC.
A lawyer in the area, who wished to remain anonymous, charged that, apart from this FR case, there are other serious allegations against this OIC who enjoyed impunity.
Dilupa Pieris (37), Nimal’s wife, was angry with the media reports on her husband’s death, alleging that the media had been partial towards the police. “They have insulted my dead husband,” she accused.

The eldest son, D. Sampath Thushara (22), married with a four-month-old baby, told the Sunday Times, “My father had gone to Panadura between 4.30 am and 4.45 am, which is his routine for almost 20 years. Then, his mother had received a call at 5.58 am, saying that ‘Nimal’ was taken in by the Police.”

“At first, my mother did not believe this, she thought it was some joke,” Sampath said, adding that the caller had not identified himself nor disclose in which Police station his father was. “Later, when I took the call, the caller told me that Nimal is in the Wadduwa Police Station,” he said.

Around 6.30 a.m., along with his younger brother, he had gone to the Wadduwa Police Station.
“There we saw our father lying in the police cell. When he saw us, he asked for some water. He told us that the Police had beaten him, and that he was bleeding,” Sampath said.

Sampath said he had taken an empty bottle he found inside the cell, and filled it with water from a tap a Woman Police Constable showed him and placed the bottle inside the cell, since he could not reach his father. 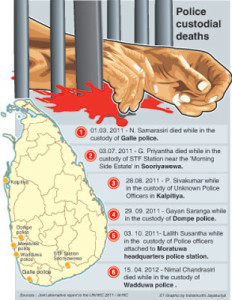 “My father was so feeble, he could not reach for the bottle,” Sampath lamented. “I approached a police officer at the desk and told him that father was very ill and should be taken to hospital, but he laughed and told me that my father must be scared,” Sampath said.

Later, at around 8.30 a.m. he went to the Police station accompanied by one of his friends who was known to some of the police officers. At that time, he saw his father was lying on his back, and the vest he had been wearing, had been removed. “He was so feeble, he could not have removed the vest by himself,” he said.

After his friend met the Police officer, the friend asked Sampath to bring a three-wheeler to the police station around 11 am, to take his father to the Magistrate to get bail. Later, when Sampath went to the Police station around 10.30am, he learnt that his father had been taken to the Panadura Base Hospital. He alleged that the Police never informed the family that his father was taken to the hospital.
He said that, when he visited the hospital, his father’s body was kept in the OPD. “The Police had taken my father to the hospital after he was dead,” Sampath charged. “Had the Police listened to my pleadings this would not have happened.” He alleged that the police assaulted his father and did not want to hospitalise him, because he did not listen to the police and plead guilty.

However, according to Wadduwa Police, Nimal Chandrasiri was arrested for keeping two cannabis cigars, which the family denied. According to Police Spokesman Ajith Rohana, OIC Nimal Karunathilake was transferred to the Mount Lavinia Police after the death.

According to a report published in the UN Human Rights Council’s Committee website, there had been six deaths in police custody last year. However, according to the Asian Human Rights Commission the figure is double that amount. According to the UN report, there had been a total of 24 custodial deaths in 2009, followed by nine deaths in 2010.“I think that, whatever the religious sentiments we have, we tolerate torture. We have seen a number of uprisings where people were killed on the streets, and while government forces reacted with even more brutality,” a prominent human rights lawyer and rights activist opined.

“Although laws such as Convention Against Torture (CAT) is incorporated in the country’s legal system to tackle police torture and custodial deaths, people tolerate torture on a daily basis,” he argues. “Do we see people here protesting against torture, like in most developed countries,” he questioned. “The main reason is that society is tolerant towards torture. As a society, we accept torture and never condemn it. Some people do not mind torture at all.”
He said that, “Torture is an offence under the CAT act, and the Attorney General’s Department is expected to take action against errant police officers. There can’t be any justification whatsoever, advocating torture.”

He said that, even FR cases in the Supreme Court, against police torture, could not be amicably settled, in view of the serious nature of such crimes. “There is a Supreme Court judgment to the effect that such cases should not be settled, because the Police usually force or give money to torture victims, to settle cases,” he said.

“Now, this is practised in the breach, because the police have found a new way of outside-court settlements to settle such cases, and what the court does is to allow the petitioners to withdraw such cases and dismiss them,” he said .

“Police file bogus cases against innocent people, without properly investigating them. They also come out with various stories alleging that suspects tried to escape or shoot at the police, or that, the suspects committed suicide while in police custody,” he added. He said that those too are custodial deaths, which are not properly investigated.
ST