…..And the Rajapaksas will win.- Tisaranee Gunasekara 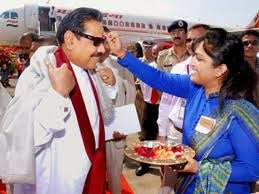 ”If the TNA leaders also place their demands outside this ‘Indian scale’, they will be seen by Delhi as part of the problem and not as part of the solution. Plus they will be giving the Rajapaksas an excellent card to subvert a political solution and maintain status quo. The Rajapaksas’ addictive dependence on China means that someday Modi-India will have to focus on Sri Lanka. If democratic Tamils succumb to the malaise of maximalism, they may miss that historic opportunity. The path to a just and equitable peace will close.
And the Rajapaksas will win.”
Tangled Webs by Tisaranee Gunasekara
“History, despite its wrenching pain,
Cannot be unlived, but if faced
With courage, need not be lived again.”
– Maya Angelou (On the Pulse of Morning)
The Rajapaksas will not devolve power; not unless they are pushed to the wall, and left with no way out, not even a peephole.
Only an external power can generate such an irresistible force.
Will Modi-India be that power?
Over the years, the Rajapaksas had mastered the art of ‘Hoodwinking Delhi with a Sincere Face’. They developed a Dodgy Dance, made up of promises, pronouncements, evasions and denials, which enabled them to make slipperiness look like flexibility.
The Dodgy Dance worked to perfection with Congress-India. Will it work equally well with Narendra Modi’s India?
According to Indian Foreign Secretary Sujatha Singh, devolution figured in the discussions between PM Modi and President Rajapaksa: “Early and full implementation of the 13th Amendment and going well beyond” .
Colombo made no open denial. Instead its official statement emphasised that President Rajapaksa and PM Modi discussed reconciliation, fishermen and Sampur; any mention of devolution (13 or 13+) was conspicuous by its absence.
The Dodgy Dance has already begun.
The discrepancy between the two public stances did not go unnoticed by Indian media: “Interestingly while foreign secretary said that the 13th Amendment issue had been discussed ‘at some length’ there was no mention of this in the press release from the office of Lankan President Mahinda Rajapaksa” .
One of these weeks Sushma Swaraj will be winging her way to Colombo. Will the new External Affairs Minister feel a sense of déjà vu, as she listens to President Rajapaksa’s straight-faced and sincere assurances of unwavering commitment to 13+? Will she remember how she was treated to a blinding dose of Rajapaksa Maya, when she led a parliamentary delegation here, in her capacity as India’s Opposition Leader?
In April 2012, Ms. Swaraj and her delegation discussed devolution with President Rajapaksa. A Congress parliamentarian declared that “the team had taken up various issues with the Lankan President including devolution of powers to Tamil-speaking areas” . Going by her confident mien, Ms. Swaraj (a hard-as-nails political operative, according to all accounts) was obviously certain that she had managed to unravel the Gordian knot of devolution. The delusion did not last long. Just days later Agrarian Services Minister, SM Chandrasena stated, “Indian delegates are saying various things to the media. But our President has not made any commitment” .
Will the new Indian Foreign Minister find herself bogged down in the same mire of lies and deception as her predecessors? Take, for instance, the discomposing fate of SM Krishna, India’s foreign minister from 2009 to 2012. He discussed devolution with President Rajapaksa on January 17th 2012, and told a packed media-conference, ‘I discussed this matter [political solution for Tamils] with His Excellency the President this morning. The President assured me that he stands by his commitment to pursuing the 13th Amendment plus approach.”
Less than a fortnight later, President Rajapaksa denied it all: “Oh, No! How can I make promises like that? I have referred the issue to Parliament” .
Mr. Modi and Ms. Swaraj are no pushovers. But, currently, Sri Lanka is not high up on their agenda. Mr Modi has innumerable national promises to fulfil and the multiple sub-continental crises are likely to occupy Ms. Swaraj’s immediate attention.
The Rajapaksas know that Indian pressure ebbs and flows. That was the way it was with the Congress. Will it be the same with the BJP? If not, the Rajapaksas will be willing to walk a few extra miles, to buy time on the devolution front.
Conceding on Sampur (or pretending to) has already begun: “A statement from the President’s Office said that Rajapaksa had directed the Attorney General and the Secretary to the Ministry of Power and Energy to expedite the project.” Buy influential friends in Delhi (with links to Mr. Modhi) via substantial economic concessions (tax breaks to sweetheart land deals). Be flexible on the fishermen’s issue, up to a deal with Delhi – which will boost PM Modhi’s image in Tamilnadu and render Chief Minister Jayalalitha a little irrelevant.
Anything but devolution.
The Rajapaksas have an unrivalled capacity to ‘to recount many falsehoods like the real thing’ . Sooner or later, they will use their ‘hardline’ acolytes to unleash a cacophonous ‘national’ campaign against devolution. We might be treated to such riveting spectacles as Wimal Weerawansa fasting unto death, again, Champika Ranawaka threatening to resign or BBS/Ravana Balaya monks planning to immolate themselves….
If the Rajapaksas are unable to do to Modi-India what they did to Congress-India it will be because of the Chinese factor.
Unaffordable Devolution
The Rajapaksas want to keep all power in Rajapaksa hands. Devolution therefore is our. Sinhala supremacism is the politico-ideological plinth on which the Siblings have mounted their anti-devolution policy.

Familial politics are reinforced by familial economics. Selling/leasing land (preferably to foreigners) is a favourite Rajapaksa money-making method. If the 13th Amendment is implemented in full (let alone 13+), Rajapaksa-capacity to flog Lankan lands to any moneyed foreigner will be affected.

Plus the Siblings regard countervailing sources of democratic power as either obstacles to be overcome or threats to be defeated. Thus the fate of the Judiciary and the 17th Amendment, neither of which had anything to do with devolution, Tamils or minority rights. Because, as Basil Rajapaksa explained, “In other countries who are successful, they were successful because immediately one person he takes the decisions. In Sri Lanka, the main problem is that that is not there, more decisions have to be centralized” .
The Siblings labour hard to maintain the myth of an anti-devolution South. The Rajapaksas need the image of Sinhalese foaming-at-the mouth against devolution as an excuse to delay a political solution indefinitely. The anti-Accord riots were not spontaneous; they were engineered by the JVP and the SLFP, as Mahinda Rajapaksa, a leading incendiary, would well know. President Rajapaksa used his Sinhala-hardline acolytes to discredit the Majority Report of the APRC Expert Panel and to negate the APRC recommendations. A new APC will meet the same fate.
The UNP has very wisely offered to support any devolutionary measure to solve the ethnic problem . Will the Rajapaksas use their green-pawns to create faux ho-ha in the UNP, opposing more devolution in the name of ‘patriotism’?
JN Dixit once categorised the Thimpu talks as ‘a dialogue of the deaf’ .
In her statement, Sujatha Singh expressed India’s commitment to a ‘united’ Sri Lanka. This indicates the minimum and maximum limits of the devolutionary scale acceptable to any India. The Rajapaksas want no devolution. If the TNA leaders also place their demands outside this ‘Indian scale’, they will be seen by Delhi as part of the problem and not as part of the solution. Plus they will be giving the Rajapaksas an excellent card to subvert a political solution and maintain status quo.
The Rajapaksas’ addictive dependence on China means that someday Modi-India will have to focus on Sri Lanka. If democratic Tamils succumb to the malaise of maximalism, they may miss that historic opportunity. The path to a just and equitable peace will close.
And the Rajapaksas will win.
(Photo courtesy of Economic Times)
Share
Facebook
Twitter
WhatsApp
Pinterest
Email