Analysis: The assault on freedom of expression in Sri Lanka 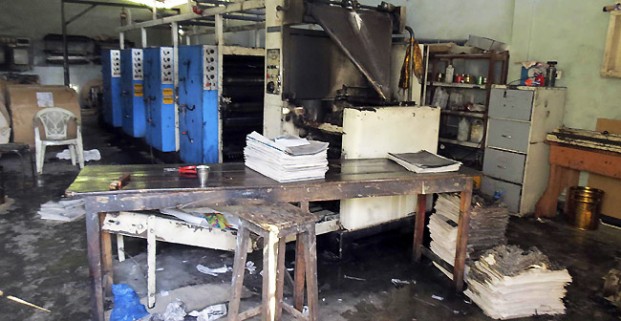 In the early hours of April 12, 2013, armed men entered the office and printing press of Uthayan, a daily Tamil language newspaper published from Jaffna in northern Sri Lanka. Men torched the printing press and newspapers that were about to be despatched for sale.

But in Jaffna, and indeed in Sri Lanka, this was just the latest of such incidents. The Uthayan knows this probably better than any other publication. Just a few days earlier, on April 3, the same newspaper’s Killinochi office was attacked and several employees were injured. On March 20, an Uthayan reporter was threatened by the military. In mid-January the editor of Uthayan was interrogated by the Criminal Investigation Department about an article implicating senior army officers. The list goes on.

It is widely believed that the recent wave of attacks on Uthayan is due to the newspaper continuing to publish stories critical of the military and the government ahead of the upcoming elections in the north of the country, particularly about occupation of land by the military. Uthayan is owned by a member of parliament from the opposition Tamil National Alliance, at whose hands the government had suffered heavy defeats in all elections held in the north after the end of the war in 2009.

Uthayan offices and press, as well as editors, reporters and distributors have been subjected to repeated attacks and threats, particularly since the advent of the Mahinda Rajapakse government. At least five staffers have been killed or disappeared and many have been injured. Predictably, nothing has been done about any of these incidents.

While the Tamils in north have borne the brunt of attacks on freedom of expression in recent weeks, months and years, such attacks and restrictions continue in all parts of the country.  In March this year the government-owned Sri Lanka Broadcasting Corporation censored the retransmission of the BBC Tamil-language broadcasts, leading the BBC to suspend retransmission citing interference as a serious breach of trust.
(READ MORE: Sri Lanka blocks BBC reports as UN condemns violence)

A culture of impunity
Impunity for such attacks and restrictions continues. No prosecutions or convictions are known to have happened in relation to any of the attacks on Uthayan, the killing of Sunday Leader editor Lasantha Wickramatunga, the disappearance of cartoonist and journalist Prageeth Ekneligoda, or the brutal assault on journalist and press freedom activist Poddala Jayantha, among others. The police, courts and the National Human Rights Commission have steadfastly refused to take decisive action on attacks and restrictions on freedom of expression and opinion. 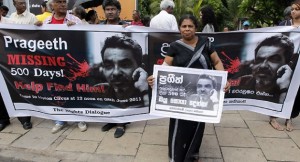 The head of the government’s official delegation to the UN Committee Against Torture Mohan Peiris told the committee that disappeared journalist and cartoonist Ekneligoda was living overseas, and when challenged to disclose what he knew refused to do so. When he was finally compelled to appear before a Sri Lankan court he said he didn’t know anything. No one knows which was the truth or which was the lie, but he got away scot free. Indeed, he was appointed Chief Justice by the President earlier this year after the previous Chief Justice was removed from office illegally.

Several journalists who were threatened have told me that they had been approached by government supporters with offers of money, jobs and guarantees of safety if they were ready to spin a pro-government line. Many Sri Lankan journalists have subjected themselves to self-censorship out of fear. More than 50 journalists, including prominent and well-known press freedom activists, have gone into exile in the last four years.

Most media institutions are controlled by the government and ownership can be traced back to allies and family members of President Mahinda Rajapakse. State-owned and controlled media have regularly been used as a political tool to discredit anyone critical of the government, including the 43rd Chief Justice Shirani Bandaranayake, who was illegally removed from the office.

In 2006, Sri Lanka made a voluntary commitment to invite the Special Rapportuer on Freedom of Expression and Opinion, but to date the government has not honored this commitment despite repeated requests. Presently, there are eight UN rapportuers who await invitations.
(READ MORE: Amnesty: Sri Lanka government cracks down on critics)

In March 2013, the UN Human Rights Council expressed concern about violations of the right to freedom of expression and intimidation of journalists in Sri Lanka. Earlier, the government’s own Lessons Learnt and Reconciliation Commission said it was “deeply disturbed by persistent reports concerning attacks on journalists and media institutions and killing of journalists and the fact that these incidents remain to be conclusively investigated and perpetrators brought to justice” and went on to condemn “the deplorable attack on the editor of the Uthayan newspaper in Jaffna, which occurred while the Commission’s sittings were still in progress”.

Signs of hope
Amidst this bleak and fearful situation, there are still signs of hope for freedom of expression in Sri Lanka.
Uthayan stands out as a small local paper that is a symbol of resilience, courage and fierce commitment to go on reporting. It is this spirit that has made it continue to publish throughout the war and after, despite repeated attacks and threats. Many other publications, in both Sinhalese and Tamil, have continued to stand up to government and military intimidation.

Websites and blogs run from within Sri Lanka and by exiled journalists have become a major platform to publish reports and columns mainstream media do not want to carry. Significantly, many of these are Sinhalese bloggers.
Despite continuous threats, media organizations in Sri Lanka have continued to campaign for freedom of expression and opinion. Support from human rights activists, civic organizations, some opposition politicians, religious clergy, lawyers and international press freedom and human rights organizations continue to play an important role in strengthening those in Sri Lanka who dare to exercise their freedom of opinion and expression. Ultimately, it will be up to Sri Lankan citizens to show whether they value the right to know different kinds of information and opinions, and what they are ready to do for that.

About the authorRuki Fernando is a Sri Lankan human rights activist and press freedom advocate. He is particularly active in the protection of journalists who are threatened and intimidated because of their work. Ruki is also known for his reporting of human rights issues in northern Sri Lanka both during and after the war.

By Asian Correspondent May 1st